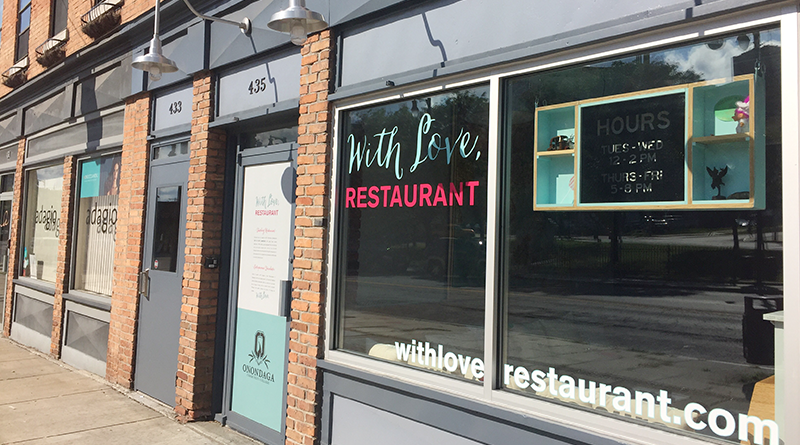 There could not be a better location in Central New York for With Love — a restaurant incubator whose cuisine changes every six months and whose menus change much more frequently — than Syracuse’s North Side.

The restaurant is in the heart of Little Italy, a neighborhood characterized by a mix of cultures and a vibrant refugee community where dozens of languages are spoken each day.

With Love opened last December and served the food of Sarah Robin, a native of Pakistan’s Punjab province who emigrated to the United States as a refugee about four years ago. On Aug. 1, Nancy Aye, a Burmese refugee who came from a refugee camp in Thailand to Syracuse in 2008, took over as With Love’s restauranteur.

We arrived for a Thursday night dinner — dinner is served on Thursday and Friday only, with lunch served on Tuesday and Wednesday — just after 5 p.m. The restaurant was empty, save for the staff, including Aye and Adam Sudmann, who is charge of OCC’s food services management program and manager of the restaurant, and a group of parents and young children, sprawled out in the restaurant’s front room. The front room features cushions on the floor and pillows against the wall that complemented the sky-blue tin walls — a sort of hybrid Japanese tea house/restaurant vibe that looked immensely comfortable.

Aye arrived at our table to explain the menu soon after we sat down. The menu is short: Two starters, two entrees and one dessert, plus Burmese tea, tamarind-peanut and hibiscus-mint coolers and local Salt City Coffee.

She explained all the components in the dishes — that the pork in the grilled moo ping skewers is locally-sourced or that the tamarind cooler pairs best with the spicy garlic noodles—but had already made our minds up: We were ordering everything.

Dinner started with moo ping and the green and heirloom tomato salad (both $7). The moo ping skewers, served three to an order, are made with pork butt, so there was plenty of smoky fire-kissed pork fat marbled into the lean meat. The meat was not strongly seasoned, which was good, because it otherwise would have obscured the deliciously fruity and spicy chili sauce served alongside. With a little bit of sauce left in the cup, but all the pork gone, I found myself scooping up the last bit with my finger — after first looking around to make sure no one would see me.

The tomato salad combines green and red tomatoes with crispy fried shallots, chopped peanuts, sesame seeds, crunchy fried rice noodles and a fish sauce dressing. For a country as intensely hot as Burma (Myanmar), it makes sense that a cool, refreshing salad like this would be a regular part of the diet. The shallots and rice noodles provided a pleasant crunch to the dish and complemented the tomatoes well.

Far too many chicken curries are made with sliced breast meat, which quickly overcooks and adds little in the way of flavor as it is. But at With Love, the chicken curry ($12) is juicy stewed dark meat served atop a bed of jasmine rice. Aye explained before our meal that her house-made Madras curry is unlike most other curry dishes, thanks to its unique blend of spices and use of coconut milk that tasted like a hybrid between typical Indian and Thai curries.

Whatever the spice mix is, it’s incredible. The dish has an immense depth of flavor and just a touch of heat, though I wouldn’t consider the dish spicy. The rice, cooked in the same or a similar sauce as the chicken, is a flavorful and well-cooked supporting star.

The garlic noodles, available with ($13) or without ($9) grilled shrimp, is a tangle of wheat noodles in a slick and spicy garlic sauce, speckled with peanuts and chopped purple basil. Aye was right, the sweet-and-sour tamarind cooler worked well to cut the spice, as did the neat piles of cubed cucumber and fried homemade chickpea tofu alongside the noodles. The hibiscus cooler, with its distinct ruby red color and tart flavor, held up well to the challenge as well.

Both dishes were comforting, like the Burmese equivalent of your mother’s spaghetti and meatballs for Sunday supper.

Dinner ended with crème brûlée ($6), which Aye said with a laugh is a chef’s special and not a traditional Burmese dish. Crème brûlée is a favorite of mine at restaurants largely due to the time and tools its takes to make it at home, so I have eaten my fair share. The sugar crust — which can make or break the dessert — was dark and uniformly crisp. With Love’s version was flavored with coconut, pandan leaf, a sweet herb common in Asian desserts and jaggery, a type of unrefined cane sugar. The custard was topped with pink pearl tapioca, which resemble salmon caviar and give the dish a unique textural contrast. This classic French dessert was distinctively Burma.

By the time we finished dinner, the small restaurant of about two dozen seats had filled up. Right as we were about to leave, one older couple walked in, looked at the menu, looked at each other and walked out. If only they knew what they were missing.