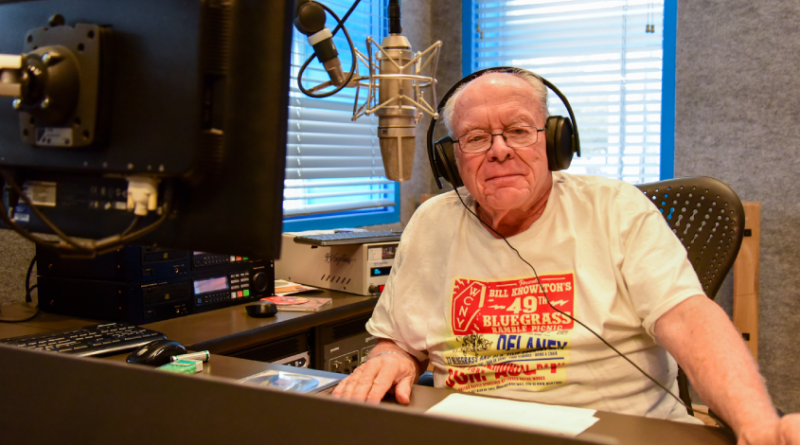 Bill Knowlton has shared his love of bluegrass music with radio audiences and at festivals for nearly 50 years. Bluegrass music can make your pulse pound, strum your heartstrings and remind you of home, all at the same time.

The 84-year-old Liverpool resident is well-known for his love of bluegrass and knowledge of its history.

Knowlton has long demonstrated that love and knowledge to fans of the genre over the airwaves and at bluegrass festivals. This January, his radio show Bill Knowlton’s Bluegrass Ramble will celebrate 50 years of broadcasting from Syracuse’s radio station WCNY. In August, bluegrass music lovers will be able to celebrate the 50th anniversary of Bill Knowlton’s Bluegrass Ramble Picnic, a yearly gathering of bluegrass and old-time country musicians that Knowlton organizes.

Bluegrass songs are about the kinds of issues and events that everyday people find important. Gospel music figured prominently in bluegrass music’s development, but the style also draws upon secular songs that focus upon the home, the family and love. 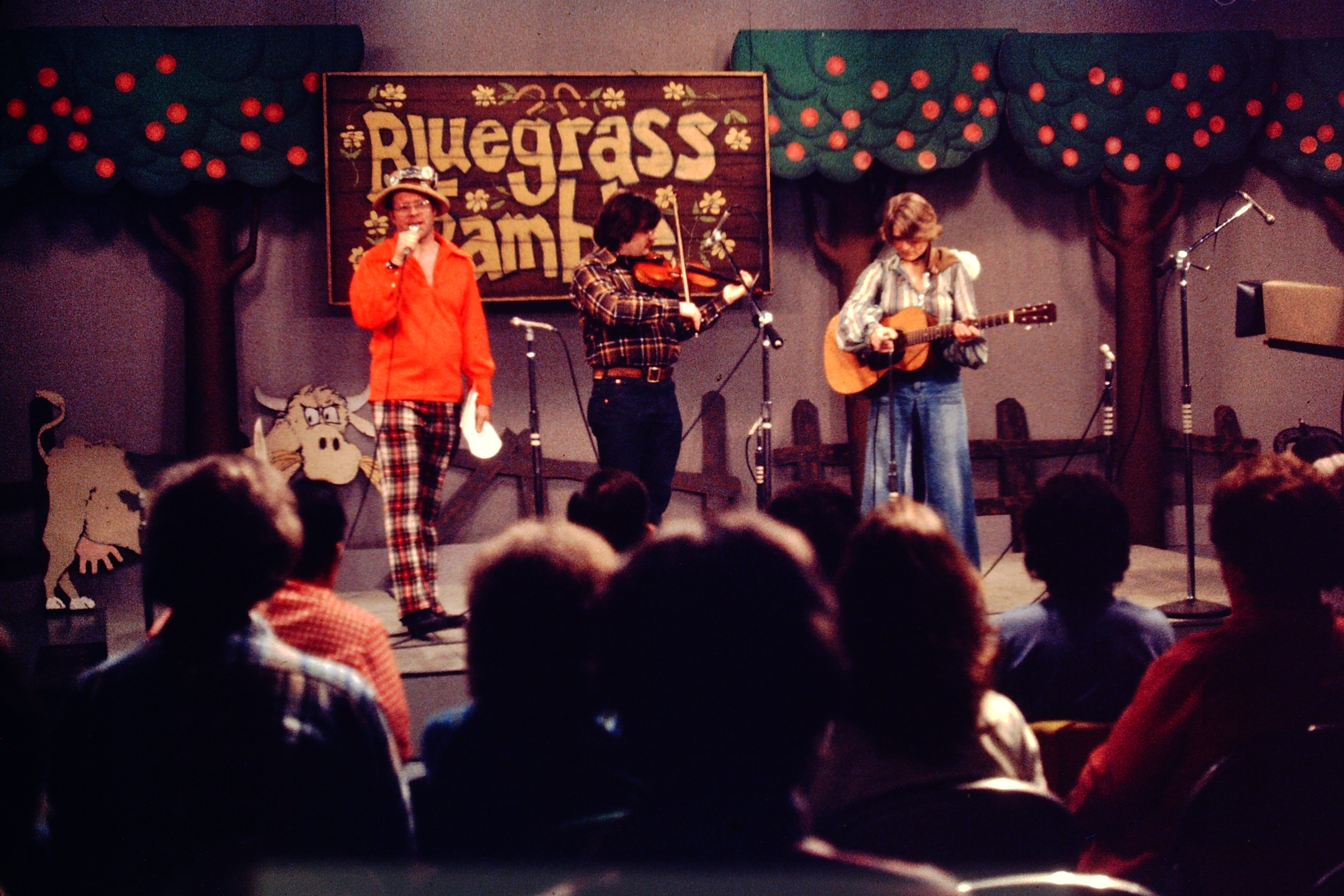 The genre is named after Bill Monroe and the Blue Grass Boys, a band that the late William Smith Monroe, who is often called the father of bluegrass music, formed in the late 1930s.

“If it had been ‘Bill Monroe and the Appalachian Boys,’” we’d be calling it ‘Appalachian Music,’” Knowlton said.

Knowlton became a fan of radio bluegrass as a teenager living with his family in Queens, a borough of New York City. He’d been listening to country music over the radio, but found it was turning away from its roots. Some new versions of country tunes didn’t feature the fiddling that is intrinsic to that style and others included choral singing that seemed out of place. Hungry for that real country sound, Knowlton began listening to bluegrass.

“I thought that was the only authentic country music that was still left,” he said.

Seeking more bluegrass, Knowlton began tuning into stations like the Newark, New Jersey radio station WAAT, where the late Don Larkin slipped bluegrass tunes into his four-hour country music program. By the time he became a senior at New York City’s Fordham University, Knowlton was ready to share his love of the music over the airwaves. On Oct. 7, 1959, he began hosting a half-hour radio show over WFUV, the university’s student- run radio station. The show ran for just less than a year.

Upon graduating, Knowlton found a job as a disk jockey for the now-defunct Connecticut radio station WBZY, playing gentle pop selections for five hours a day. With the station’s permission, he began doing an hour-long bluegrass show for free at the end of his regular programs.

Knowlton was drafted into the US Air Force in 1962 and spent eight years on active duty at bases that included Tan Son Nhut Air Base in what was then South Vietnam and the now-defunct Hancock Field Air Base in Syracuse. He then went on to spend 17 years in the reserves before leaving the service completely with the rank of lieutenant colonel. Knowlton has also worked for an ad agency in the past and as a civilian employee of the US Army, from which position he retired in the early 1990s.

Through it all, Knowlton retained his desire to share his love of bluegrass with others. He organized the first Bluegrass Ramble Picnic back in August, 1973.

“It was the first one in Central New York,” Knowlton said.

The daylong celebration of bluegrass and country music now offers such acts as the Atkinson Family Bluegrass Band and The Lonesome Road Ramblers.

Knowlton made use of his previous on-air experiences at Fordham when the chance came to do a bluegrass show at WCNY.

“I called it the Bluegrass Ramble and I used the same theme songs that I used at WFUV,” Knowlton said. “I’m still using those theme songs today.”

Now called Bill Knowlton’s Bluegrass Ramble, the three-hour show has run every Sunday night since then.

“I think mine is the longest-running bluegrass radio show with the same host,” Knowlton said.

WCNY classical music host Marie Lamb has worked with Knowlton in various capacities for about 20 years, including the time she’s spent representing the station at Bill Knowlton’s Bluegrass Picnic.

She’s also done the post-production work on his radio show for about the past nine years and considers him a friend.

“He’s a very interesting and talkative and has a very good sense of humor,” Lamb said. “Everybody here loves him.”

Clifton Chandler Jr. has known Knowlton for at least 35 years.

As part of the musical duo Northwater, Chandler has played many Bluegrass Ramble Picnics down through the years. He’s even appeared on Knowlton’s radio show, playing his harmonica and talking to the show’s host about music.

“Sitting in the studio and talking with him, he’s just a bottomless barrel of information all around bluegrass and old-time country,” Chandler said of his close friend. 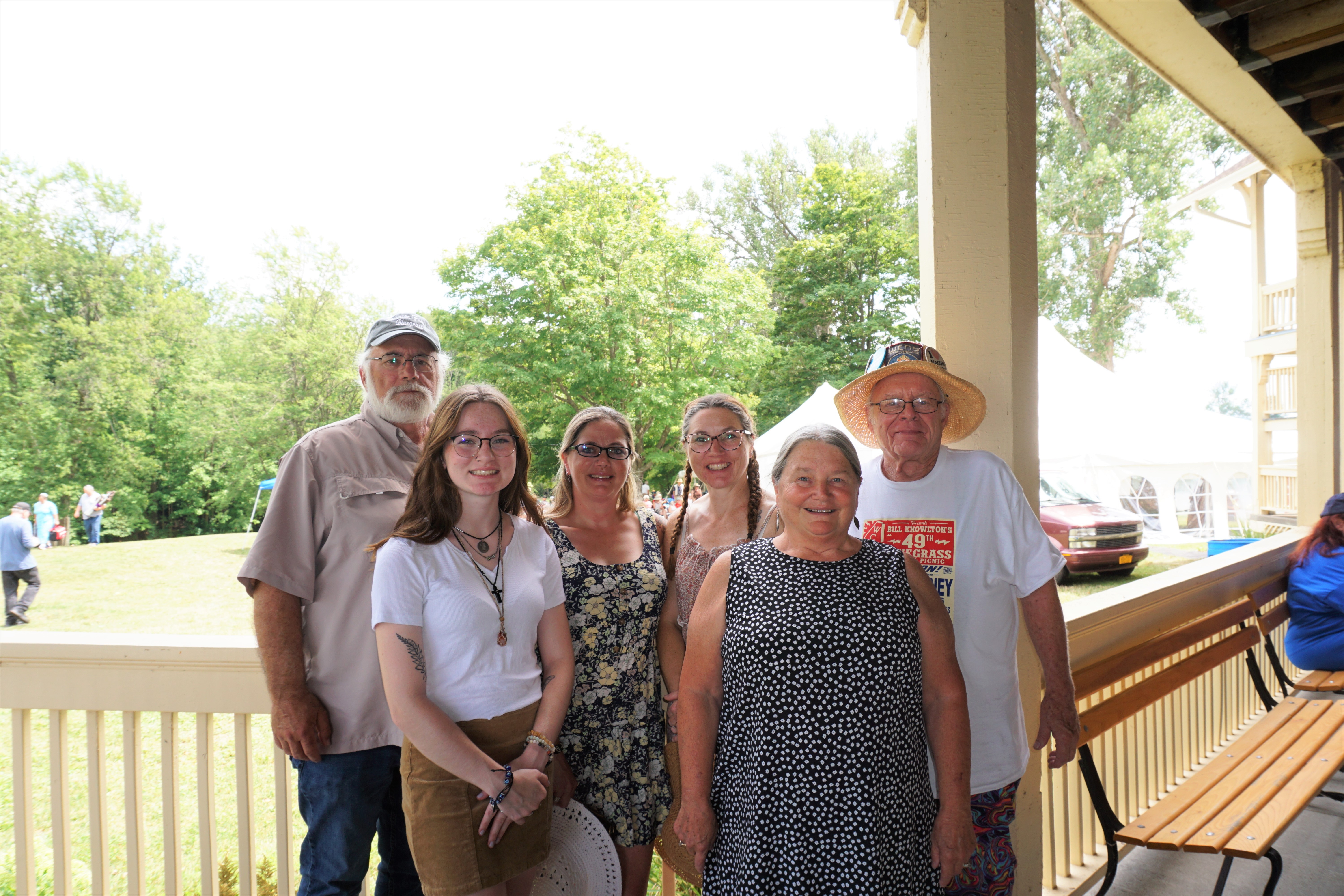 “When we were first getting started as a family band, we sent him a recording on a cassette tape and he played us on the radio,” Atkinson said. “Bill has spent his entire adult life trying to preserve and promote bluegrass music.”

The band, which hails from just outside Harrisville, close to the edge of the Adirondack Park, brought its sound to the 2022 Bluegrass Ramble Picnic.

In addition to hosting his weekly radio show and organizing the Bluegrass Ramble Picnic, Knowlton emcees as many as nine music festivals each year, including Uncle Dave Macon Days, a celebration of bluegrass and country music that is held each year in Murphreesboro, Tennessee.

“He was the first superstar of the Grand Ole Opry,” Knowlton said, referring to the world-famous home of Country Music. “I have spent a lifetime studying his career and his family and writing about him.”

Knowlton is also a co-founder and former board member of the now-defunct Central New York Bluegrass Association, and has written articles for Bluegrass Unlimited Magazine, which has been called the bible of the genre. He has earned multiple accolades, including a Distinguished Achievement Award from the International Bluegrass Music Association and a Lifetime Achievement Award from the Syracuse Press Club.

Knowlton plans to continue doing his radio show at least until the 2023 Bluegrass Ramble Picnic is over.

“I’m looking for the big 50 and then figuring out what I’m going to do after that,” he said.

He hopes to groom someone to continue doing the radio show he first hosted in Syracuse back in 1973.