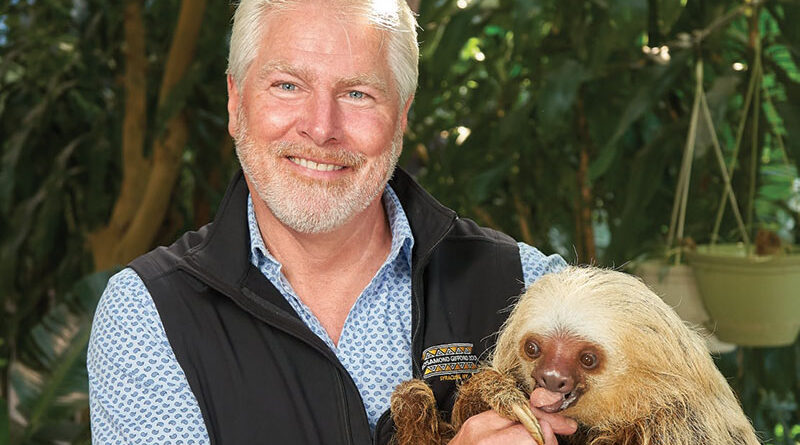 Of the 35 years that the new Burnet Park Zoo — now called the Rosamond Gifford Zoo at Burnet Park — has been open in Syracuse, director Ted Fox has worked there for 30 of those years.

As a point of clarification and a brief segue down memory lane, those of a certain age will most likely recall the “old” Burnet Park Zoo.

The city of Syracuse turned it over to Onondaga County in 1979. It remained open until 1982, when it was shut down for a complete overhaul. It reopened in 1986 as the “new” Burnet Park Zoo. It was renamed Rosamond Gifford Zoo at Burnet Park in 1999, following an endowment of $2 million from the Rosamond Gifford Charitable Corp., commonly known as the Gifford Foundation.

A roast of Fox to celebrate his tenure will be the highlight of the zoo’s first-ever fall conservation ball on Sept. 10.

The group funds many of the renovations and improvements at the zoo. Having celebrated its 50th anniversary in 2020, the Friends of the Zoo is comprised of a staff and a volunteer board, and it oversees the zoo’s gift shop; membership; educational programs; the rental and catering of the zoo for special events; and such popular fundraising events as Brew at the Zoo. The Friends’ Pic of the Month contest invites the public to take pictures at the zoo and submit them for acknowledgement and prizes. Each month the winning photo is posted on the Friends’ various social platforms.

His start at the zoo

While Fox has had a love of animals, especially birds, since he was a young boy, he said he didn’t really know much about zoos early on.

However, that all started to change when, in about 1990, he was invited by a friend to join him for a visit to the Burnet Park Zoo.

He met the then-bird curator Ken Reininger, who encouraged Fox to volunteer at the zoo a few days a month.

In 1991, Fox graduated from Cornell University with a bachelor’s degree in animal science with a minor in poultry science and a concentration in natural resources. He began working as a part-time zookeeper in the bird department at the zoo.

“That’s when I started thinking, ‘Boy, this field is something really special and it checks so many boxes for me personally,’” he said during a recent interview.

It brought many of his interests together — conservation, public education and the opportunity to connect “community with something so special to me,” he added.

He would go on to serve as a small mammals keeper, a birds keeper, bird collection manager and a curator. He would be named director in 2011, replacing Chuck Doyle.

In describing his responsibilities as director, he referenced the Association of Zoos and Aquariums, the accrediting organization for the zoo and other such facilities.

“If you ask our accrediting body, there’s one person that’s in charge and responsible for everything that happens at the zoo and that’s the director,” he said.

Some numbers show the magnitude of the work. The zoo has about 700 animals, everything from insects to elephants, Fox said. In a typical year, there are an estimated 340,000 visitors and it does more than 250 on-site education programs and 150 Zoo to You mobile education programs.

While these programs are a function of the Friends of the Zoo, Fox has to approve all the content and his staff trains zoo educators in the handling of ambassador animals. Fox oversees a staff of about 60, with 38 full-time and 20 part-time employees.

He credits the staff for much of the success the zoo has achieved over the years.

“Fortunately, we have an amazing team that all do wonderful things,” he said. “I’m not a micromanager to begin with. Part of the good thing about having such a long tenure is the people that I work with know me and knows what the expectations are and vice versa. Ultimately, the credibility and our standing with the AZA, within the community, are so important. That’s the ultimate goal for all of us. Having a great team is where it starts.”

Fox also works closely with the Friends of the Zoo on a variety of projects. Although the executive director with the organization is relatively new, she said that she and Fox got along immediately.

“Ted and I hit it off right away. We make a great team,” Large said. “His enthusiasm for the zoo and its missions are contagious.”

While the current clinic was state-of-the art at the time it was launched, it is only about 1,500 square feet. The more the zoo has grown and they learned about what is needed for various procedures for the animals, that space is no longer big enough, Fox said.

The new facility, which will be approximately 20,000 square feet, will allow the public more opportunities to view health care provided to the animals; expand the relationship with Cornell University’s College of Veterinary Medicine, with its vets working at the zoo, along with students, interns and residents; and will help to increase the possibility of more research and grants.

One of the favorite parts of his job, Fox said, is acquiring new animals, interpreting them for the visitors and in those cases where a breeding program is involved, giving the animals the best life possible.

He also enjoys designing and developing new parts of the zoo. Over his 30 years, he’s been involved in many of those projects. Some of his favorites include the soon-to-be-completed Animal Health Center; the Primate Park, with a large space where visitors can enjoy watching the activities of the animals there; and Penguin Coast, home to the Humboldt penguins and one of guests’ favorites. It was built to resemble the coastal areas of Chile or Peru, the native land for these birds.

There is also the Asian Elephant Preserve, which Fox believes is one of the best in the country. It brings the pachyderms as close to the public as possible.

“That helps us in our education and making the connection, which is ultimately what we want to do with all our visitors,” he said.

But it’s the visitors that he enjoys the most about his job.

“Kids are so excited about being here and looking at an animal in the eye and making that connection in such an exciting way. You know that something impactful is happening, that they’re not going to forget that experience. That’s really a huge part of what we do,” he said.

When asked about his accomplishments, Fox pointed out these facilities and the zoo’s conservation initiatives, but the one he mentioned first was the development of new personnel.

“I think one of them would certainly be the amount of people that I’ve been able to interact with and help in their careers, interns especially. We have an incredibly good internship program here. Many, many of them either stayed to become full-time people here or go to other zoos, which is really exciting to see and help. I really enjoy watching somebody develop and helping them learn and get excited about the things that we do,” he said.

A 30-year career is not without its challenges, budgets being among the biggest.

“You always want to do more, and you have to find innovative ways to accomplish some of the things you want to do,” he said.

Fox explained that it is expensive to keep up with the standards of the AZA and to retain the accreditation.

The Rosamond Gifford Zoo is one of 238 that are accredited in the country. One of the consequences of losing that accreditation would be the loss of many of its animals. The ones that are threatened or endangered and are part of the AZA’s species survival program, would have to be transferred to an accredited zoo. This would include the penguins, the Amur leopards, Amur tigers and the elephants.

Another challenge facing Fox and other zoo professionals is individuals and organizations that criticize these facilities. Fox said that a lot of time, care and money go into every aspect of the animals’ welfare, adding that “those are the stories we’re trying to tell now.”

Onondaga County Parks Commissioner Brian Kelley cites Fox’s focus on animal care, infrastructure and his efforts in educating people as to the importance of what a zoo does.

“As an AZA accredited institution, there are many standards and regulations that the zoo has to adhere to; Ted and his team at the zoo go above and beyond to achieve these standards daily,” Kelley pointed out.

Detractors and the chance to educate further are what inspired him to accept an offer to teach a class, titled “Scientific Issues and Practices: The Challenges of Modern Zoo Management,” as part of the Renée Crown University Honors Program at Syracuse University about 15 years ago. Although apprehensive at first, he realized that it would provide an insight into zoos, especially to this demographic. Many college students do not like zoos, he said, and many will become parents within the next decade.

“Those are the ones I want to have in the classroom,” he said. “One hundred percent of the kids that have taken that class, over 15 years now, appreciate zoos by the end of the class. They have to do a paper at the end of the class, and there are some really good challenges and questions for us in the industry. But 100% of them said they might not donate money to a zoo, but they would definitely visit a zoo and support the fact that they’re important in what we do. That’s the reason I’ve kept doing it.”

Of this class, professor Danielle Taana Smith, director of the honors program, said, “Students gain an appreciation of the ethics and complexities of zoo management.”

Fox is planning for the zoo’s future on the foundation of its history.

Saying that Fox has been the heart and soul of the zoo for a long time, Commissioner Kelley said, “In the span of his 30-year career, he has touched the lives of a large part of this community with his dedication and passion for what the zoo’s mission is and why it is so important.”

Fox plans to continue the AZA standards and to develop more exhibits. He has his eye on redoing the old elephant facility, which was right inside the zoo main entrance, an area he sees as prime real estate. In addition, there are plans for an African Savanna exhibit adjacent to the Animal Health Center. With a target opening of early 2022, it would feature a large open space with multiple species of animals with smaller exhibits around it.

The zoo “is a place to come to create memories, spend time being entertained and actually learning something, too. You ask a lot of the visitors, they’re proud of the fact that we have a zoo like this,” he said.