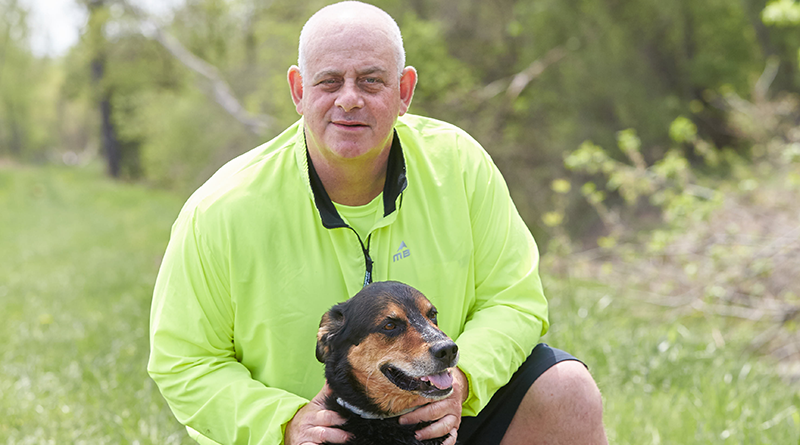 Jeff Kramer steps into a conference room at InterFaith Works in Syracuse and takes a seat at a horseshoe-shaped table where six newcomers to Syracuse, far from their homes in Colombia, Eritrea, Ethiopia, Sudan and Ukraine, watch a presentation and converse with instructors and among themselves in broken English.

Some have jobs here and some do not. All are getting acclimated to life in a strange city.

Kramer pulls a smartphone out of his pocket and shows a member of the group how to access an online dictionary, where she can type in a word, read its definition and hear a pronunciation of it. It’s a useful tool, he points out, and it helps if you know how to spell the word, or even the first few letters of it.

Kramer, 56, a big bear of a man with fuzzy silver hair — what there is of it — and a wide, toothy smile, is wearing baggy blue jeans and a black T-shirt that reads, “Anyone With a Brain — 2020,’’ which sums up his opinion of President Donald Trump and his hopes for the next presidential election.

He has been volunteering his time as an English instructor several times a week with the refugee resettlement agency’s Center for New Americans. Later that week, he will accompany two young refugees, one from Sudan and one from Afghanistan, to Syracuse Opera’s production of “La Traviata,’’ sung in Italian, with English subtitles.

The volunteer gig is a departure for Kramer, a writer and playwright who is perhaps best known for his stints as a contributing humor columnist for The Post-Standard (2003-2011) and the Syracuse New Times (2013-2017). These days the wise guy, who once sampled a dozen slices of gas station pizza in one day and went for a swim in a wetsuit in Onondaga Lake to celebrate Earth Day, feels compelled to take action in his own special way.

“I think it’s a challenge right now for all people who are not by nature political to stand up in ways big or small and try to make a difference for the country,’’ Kramer says. “I feel like if you’re not doing anything, you’re complicit in what is happening.’’

Like many Americans, Kramer says he felt sad and angry after the 2016 election that put Trump in the White House. News reports about building a wall along the U.S.-Mexico border, about undocumented people being detained and deported — tearing families apart — left him feeling upset, unsettled and wanting to do something. But what? Some internet research led him to InterFaith Works. In addition to serving as an instructor, he has written several stories about refugees for the organization’s website.

“The lives these people left behind … you wouldn’t believe the stories you hear,’’ Kramer says. “Some of these folks have some English,’’ he adds. “They need to improve it. English is the passport to a better life here.’’

Some in the community might say: Who knew Jeff Kramer had a heart? The “humorist emeritus,’’ as he has called himself, is known for poking fun at local politicians, at the “bustling cosmopolis’’ of Syracuse, at sports fans and coaches, at quilters at the New York State Fair, at Saint Marianne Cope and the Sisters of St. Francis — at just about everyone and everything, including himself. Once a week, he made people laugh — and often got under their skin. “People here are not in denial about where they live,’’ Kramer says. “They just don’t want an outsider picking on them. The teasing came from a place of generosity and love.’’

He left The Post-Standard, he says, after management took issue with the subject matter of a couple of his columns, and, without his knowledge, decided not to run them. He left the New Times for personal and professional reasons. He had witnessed the departure of several talented colleagues, and says he had concerns about editorial content and quality. But the election of Trump was “the most determinative factor’’ in his decision to quit.

“I have written newspaper humor since high school, but never from a partisan viewpoint,’’ Kramer says. “‘Equal opportunity cheap shot artist’ is how I liked to think of myself. Trump changed that. I saw him as such a dire threat to the country and the world that suddenly there was no middle ground. You were either for him or against him. He was so easy to satirize, and in the earlier months of his campaign, I took pleasure in that. But that got repetitive fast. A joyless humor columnist is a retired one.’’

Heart of the matter

In addition to feeling “frivolous’’ as a humor columnist writing about government goofs and gaffes and the latest misadventures of his dogs, Kramer was dealing with some serious and stressful personal issues. In September of 2016, he checked into Upstate Medical University to have a pacemaker installed to help his heart beat properly. For several years, he had been living with a sometimes wildly irregular heartbeat and the unanswered medical questions and feelings of uncertainty that come with it.

“With a pacemaker, you don’t just put it in and the problem is solved,’’ he says. “I was having a lot of anxiety.’’

A few months later, in January 2017, Kramer lost his mother and “No. 1 fan,’’ Jeanette, who until a few months earlier had been living an active life. “It changes you when they go,’’ Kramer says of her passing. “The one-liners were in short supply for a while.’’

Syracuse New Times Publisher Bill Brod says Kramer’s absence leaves a void in the newspaper’s pages. “One of the things that is really special about Jeff is that he can find humor in even the most serious subjects,’’ Brod says. “We definitely miss having him here.’’

Kramer says he misses writing columns and being a columnist, but times and priorities change. “I’m a local columnist at heart,’’ he says. “I don’t miss deadlines.’’

Kramer has been chasing stories and deadlines for most of his life. He grew up in Seattle and attended Western Washington University, where he studied journalism and political science and played football.

His first newspaper job after college was in Idaho. He later worked as a freelance reporter for the Los Angeles Times and as a reporter and columnist for the Orange County Register.

In 1992, as a freelance reporter covering Southern California for The Boston Globe, he was asked to get a story on the reaction in Los Angeles’ African American community to the Rodney King verdict. He filed his story from a pay phone and quickly became part of the developing story: He was beaten and shot multiple times by a group of black men before managing to drive himself out of the chaos. An African American woman and her son came to his aid and risked their own lives to get him to the hospital.

Kramer wrote about the experience for People magazine in 1992: http://people.com/archive/delivered-by-angels-vol-37-no-20/.

And last year, 25 years after the verdict and riots, he recalled the experience in a story that appeared in Newsweek magazine: www.newsweek.com/journalist-shot-l-riots-looks-back-25-years-later-592032.

After recovering from his injuries, Kramer resumed his career as a reporter and writer. He and his wife, Leigh Neumann, moved to Central New York in 2003. Neumann grew up here and has family here, Kramer notes. They live in DeWitt with their daughters Miranda, 17, and Lily, 15, and three rescue dogs.

Kramer joined The Post-Standard as a contributing humor columnist the same year and soon started taking part in play writing workshops at the Downtown Writers Center in Syracuse. He has had three full-length comedic plays produced locally, “Lowdown Lies’’ (2007), “Reaching for Marsby’’ (2012) and “The Golden Bitch’’ (2017).

Len Fonte, a distinguished educator retired from the Syracuse City School District who serves as an adjunct instructor in Syracuse University’s Department of Drama — and a theater critic for The Post-Standard — has directed all three of Kramer’s plays. Fonte says current events have influenced what his friend wants to do right now and that writing will hopefully resume when he is ready.

“We’ve had a lot of conversations about the current world situation,’’ Fonte says. “He hasn’t talked much about it yet, but he’s doing something practical. I really admire that. He’s showing a side of Jeff that people don’t see very often. They see his wild side in his writing.’’

When he posts something funny on Facebook, friends sometimes suggest that Kramer needs an outlet for his humor, like a blog. He says he is not working on anything at this time, but adds that elements of his work might someday work their way into a new play.

For now, he enjoys his ongoing volunteer work and says it feels good to do something positive for people starting new lives in this country. In addition to helping newcomers learn the language, he shares his knowledge of the community and spreads kindness and compassion: a ride to work or the grocery store, assistance with money management and navigating the health care system, or helping a man with no hot water at his apartment.

“The simple things, like a visit to the post office — they don’t always know these things,’’ Kramer says. “This is an organization I feel proud to be part of. It’s not my whole life, but it’s a nice part of it.’’

For a man in his 50s, Jeff Kramer has faced his fair share of health and medical issues. He has to be careful when going through security at airports because he’s packing some metal.

• Bullets: Kramer was shot in the leg and back multiple times during the violence that erupted in Los Angeles following the Rodney King verdict in 1992. One of the bullets remains in his body, at his shoulder, and causes no problems.

• Knee replacement: In January of 2013, Kramer had his left knee replaced. As usual, he managed to find humor in it. “Feeling great nine weeks after knee replacement AND I still have a valid handicapped parking placard,’’ he posted on Facebook. “Can life be any better in Syracuse in March?’’

• Pacemaker: After living with arrhythmia issues for about five years, Kramer checked in to Upstate Medical University in Syracuse to have a pacemaker installed in 2016. “The pacemaker procedure is considered routine, mainly because YOU are not getting it,’’ he wrote on Facebook.

Two years later, Kramer says he is doing great. “I don’t like to throw the word ‘miracle’ around,’’ he says, “but I’m very fortunate. I feel good. And I’m lucky to have insurance.’’

Kramer says he has always carried extra weight, but he stays fit. He goes to the gym several times a week, has a stationary bike set up to ride at home and has multiple choices of bikes to ride outside, in season. He hopes to participate in several road races this summer.

“I feel really crummy if I don’t get physical exercise,’’ he says.