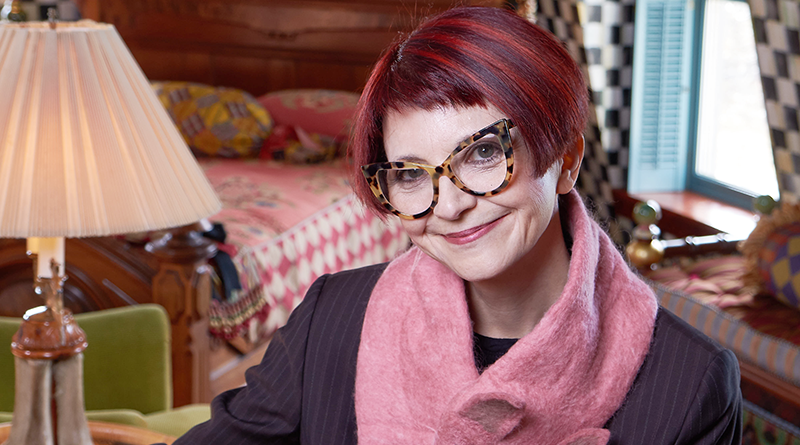 Rebecca Proctor has designs on the times

The products at MacKenzie-Childs indeed reflect the personality traits of its creative director, Rebecca Proctor, say friends and co-workers.

“Under her leadership, we don’t just make things — we make people happy,” said Mark Burgadon, who has worked there with Proctor for nearly a decade. “It’s in her DNA. She is Mackenzie-Childs. It’s her fiber.”

Proctor, 56, recently embarked upon business trips to Portugal, England, Germany and Japan to help grow her company’s product lines globally and obtain new ideas from different cultures. In March, she’ll travel to India. The Ithaca resident has played a key role during her 27 years there helping transform a modest pottery shop in Aurora, Cayuga County, to a brand that is sought after by collectors worldwide.

Before her departure, she took some time to discuss her journey here and plans for the future.

Proctor was raised in Baltimore. She has two older sisters. Her father, Sam, was an attorney, and her mother, Ruth, was a homemaker.

Ruth had a knack for interior design that inspired her daughters’ creativity early on. Sam was also a musician. The entire family enjoyed theater, art and music.

“We were always putting on little plays for each other,” Proctor recalled. “Any kind of performance or artwork was encouraged in our house. We grew up in such a creative environment.”

Proctor’s love for the arts brought her to Ithaca College. She began as an aspiring actress but graduated as an art history major with a well-rounded portfolio that included courses in sociology and women’s studies, as well as a job as assistant curator in the art history office.

“I loved it,” she said, “and it was nice because you could design your own curriculum.”

Proctor also completed some of her coursework at Cornell University and the Parsons School of Design in New York City. Two summers in a row, Proctor worked as a sous chef in Greenwich, Conn., for Dot Roberts, who owned the tremendously successful Echo Scarf company.

The head chef at the time had worked with Martha Stewart. Parties at Roberts’ mansion were frequented by the likes of Ralph Lauren and other titans in the fashion and arts industries.

“It was very, very inspiring,” Proctor said. “They were design-oriented business people. It opened my eyes to a lot of things.”

She remained in Ithaca after graduation, opening a retail-clothing store, “High Gear,” with a friend. This was the mid-1980s, an era when college girl fashions were “colorful, fun, funky and forward thinking,” Proctor explained. She owned the store for six years.

“The way we saw it,” she said, “retail was an extension of theater.”

Proctor was reading a magazine one evening after work when she came across an article about Victoria MacKenzie-Childs’ creations. The shop MacKenzie-Childs ran with her husband, Richard, was only 35 miles up Cayuga Lake from Ithaca. Proctor made the trip a few days later. She still remembers her first glance at the property when she drove up the red brick driveway.

Proctor met the couple, discussed her credentials, and was hired as their personal assistant. A short time later, she was traveling with them to Indonesia, England and Eastern Europe. Proctor was responsible for brokering deals between manufacturers and her company’s designers.

“They trusted me to make sure their designs came to life,” Proctor said. “It was a rare and delightful opportunity.”

With Proctor on board, MacKenzie-Childs enjoyed rapid growth, expanding its product line to include pottery, furniture, rugs, ceramics, tableware, furnishings, home and garden accessories. The store remained at corporate headquarters in Aurora; decades later the company added shops in New York City and then del Lago Resort & Casino in Waterloo.

In 2000, Pleasant Rowland, who created the American Girl brand, took over MacKenzie-Childs and promoted Proctor to lead as the creative director and chief brand officer. Essentially, she was responsible for every visual aspect of the company.

In that role, Proctor continued to promote “happy colors and patterns.”

MacKenzie-Childs’website shows a dazzling array of gifts. There’s a five-piece place setting painted with the company’s unmistakable checkered design, for $98. There’s a kitchen timer with a colorful flower design for $50. One of the most unique items is the “Forest Fish” chair, which has a maple frame. The back of the chair is made of fish-shaped fabric with painted landscapes. This item, priced at $1,995, is on back order due to high demand. The highest-end pieces of the furniture listed on the site sell for more than $6,000.

According to the website, every piece is made by hand and signed by the artist, and no two pieces are identical.

“The most important element we work with is not clay or wood or paint; It is our artisans,” the website says. “Their signature individuality is happily evident on every piece that bears their stamps and our name. That evidence of the artisan’s hand is what makes each piece a one-of-a kind work of beauty and grace.”

Proctor embraced the onset of online shopping, and saw globalization as a growth opportunity to penetrate new markets as opposed to a Goliath that destroys small businesses. The internet is a great tool, she explained, for communicating with designers and customers across the world.

“Talking to so many people in different countries about painting techniques is a thrill,” she said. “When I got into this field, I never imagined being able to do that.”

Handcrafted goods with the MacKenzie-Childs brand are made all over the world, but the company has committed to remaining in Aurora. “We’ve enjoyed responsible globalization,” Proctor said.

She loves the travel that comes with the job. Portugal and India are among her favorite places, largely because of the food, color, history and fragrances. She also enjoyed several trips to England, where there’s a huge fanfare for MacKenzie-Childs hand-painted tea kettles.

“We want people to tell us what we need to do to keep the brand relevant,” Proctor said.

MacKenzie-Childs is a popular brand with celebrities, and Proctor has met many influential folks over the years. One of her favorite customers is Iris Apfel, a fashion icon and world-renowned interior designer who is still going strong at age 97.

The Aurora property, located on a Victorian farm overlooking Cayuga Lake, has also become somewhat of a tourist attraction. The original structure dates back to 1909, and was first used as a dormitory for an all-girls prep school.

The company began producing pottery out of that building in 1983 and later built its headquarters up the road. Free tours of the historic farmhouse are offered year-round, and visitors are also welcome to stroll through the massive gardens.

Proctor is married to Robert Aceto, a musician who has performed as a session and touring guitarist with rock ‘n’ roll bands, including the Tom Tom Club. Their son, Alexei, is a classical piano student at Ithaca College.

Even though they live within the city of Ithaca, their home is surrounded by forest, allowing the family and their 150-pound Irish wolfhound to enjoy the Finger Lakes’ four seasons to the fullest.

Proctor stays fit by taking the huge dog for walks year-round. During the warmer months, she finds time for gardening. She also has an indoor exercise bike (Peloton) that, via online technology, allows users to participate in live cycling classes to New York City. She calls the experience challenging, fun and great for folks who are “not a fan of gyms.”

“You ride to the levels of the music, so there’s a lot of variety,” she said. “It distracts you from the pain that can come with exercise.”

She loves to cook and bake, and owns hundreds of cookbooks. Proctor bakes all of the bread consumed in her home and is especially fond of a mostly vegetarian Mediterranean diet. She prefers organic goods and locally grown produce when it’s available, and she limits her sugar intake.

Tammy Dorward, head of the company’s product development team, travels with Proctor overseas, including India and Portugal. Although she’s been with the company for less than two years, “it feels like we’ve been best friends forever. That’s just the kind of person she is,” Dorward said.

Dorward has tried to uncover some of the secret ingredients to her colleague’s success. Her key findings: peanut butter and the family dog.

“Straight out of the jar, she’ll eat it that way. It’s straight up protein,” Dorward said with a laugh. “Maybe that’s the energy source for that creativity. She’s never on slow mode. She’s always going 110 mph; it’s impossible to keep up. Themes, ideas, anything you see on our website — she’s the one who had the idea. She is so passionate and funny and truly someone who is so full of life.”

“When she gets thinking about her dog and talking about it, that’s pretty funny,” Dorward added. “Her love and affection for that massive dog just oozes out.”

Burgadon said Proctor spent significant time in every department as part of her climb to the creative director and chief brand officer positions, inspiring everyone she’s met along the way.

“That personality,” he said, “is infectious.”

With the company going so strong and her level of enjoyment as high as it has ever been, Proctor is not even thinking about whether to retire at 65, 75 or even 95. She challenges others to stay positive to the best of their abilities.

“This is an interesting time in the world, but it’s really important to find joy in everything you do,” she said. “I can’t imagine doing anything else. If work and play feel like the same thing, why would you stop?”