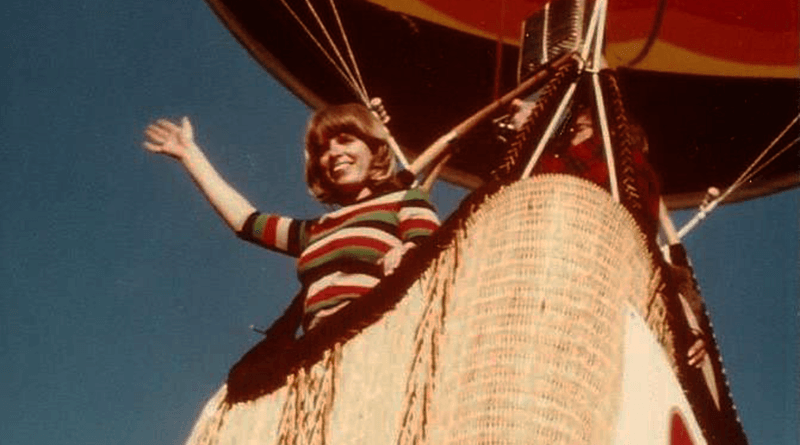 The first time she flew in a hot air balloon, Georgia Peach fell in love with the sport.

It was 1978 and Peach had flown a charter plane to Glens Falls for a balloon festival. She traded plane rides for a half-dozen balloon rides that weekend. She soon had her own balloon.

An English teacher who taught more than 30 years in Skaneateles, Peach regularly made hot air balloon flights over Central New York for years. Of all her flights, however, she says the most memorable occurred when she landed in the backyard of an Apollo astronaut.

In 1980, Peach was a young high school teacher still relatively new to the sport of hot air ballooning. She owned a balloon, but had no crew or chase vehicle to help when she landed.

“I only flew in the mornings because it usually took the rest of the day to get back home,” Peach says with a laugh.

Peach and her friend took off and immediately began climbing due to their proximity to the airport. Then they headed south. After a few hours of flying, the wind had carried them to Cazenovia, about 25 miles from their launch site.

Their fuel ran low, so Peach descended and began looking for a landing site.

She spotted a house with a large backyard and set the balloon down there. The property owner, a man in his late 40s, heard his dog barking and ventured outside to see what was happening.

“He was thrilled that we had landed there and helped us pack up the balloon,” Peach says.

The man asked all kinds of questions about the balloon, Peach says, which made her think he must have had some kind of background in aviation. When he learned that Peach and her friend didn’t have a crew to help them with the basket and balloon, he called a friend with a pickup truck to give them a ride.

The man invited them in for breakfast with his wife while they waited. During breakfast Peach, who flew small airplanes before taking up ballooning, couldn’t help bragging about her flying experiences, which she says with the benefit of hindsight were limited to say the least.

Throughout breakfast Peach and her friend still hadn’t realized who their host was. Then the man’s wife said “Bill, maybe Georgia would like to see the Moon Room.”

The Moon Room turned out to be filled with photographs and memorabilia from the Apollo program, including some actual fragments of moon rocks. It was then that Peach and her friend learned that their host was William Anders.

In December 1968, Anders flew the 231,000-mile trip to the moon aboard Apollo 8, becoming one of the first three humans to visit another world.

On Christmas Eve, as their spacecraft circled the moon, the crew beamed back images of the lunar surface and took turns reading from the Book of Genesis. The broadcast was seen by millions. During the mission, Anders snapped the now iconic “Earthrise” photograph of the Earth rising over the moon’s horizon.

“He was this great guy, very down to earth,” Peach says. “We had no idea who he was.”

Anders arrived in Syracuse in 1978 as vice president and general manager of General Electric’s aircraft equipment division in Central New York. He resigned from GE in 1984 to take a job as an executive with Textron.

“He was a very, very humble guy,” Peach says of Anders. “While I was bragging about flying little single engine airplanes 50 miles, I was talking to a man who had flown every conceivable aircraft.”

Peach was a space enthusiast growing up and had watched Apollo 8’s broadcast in college. After a tour of the Moon Room, Peach offered to take Anders for a ride in her balloon. She says she was surprised the former fighter pilot and astronaut had never flown in a hot air balloon.

A year later Peach, now with a chase vehicle, took Anders, his wife and children on several balloon flights. Two times the wind shifted over Cazenovia Lake and Peach landed the balloon right in Anders’ backyard.

“He thought I was a great pilot,” Peach says. “But it was just luck.”

Afterward, Peach says, Anders gave her a poster-size replica of the famous Earthrise photograph he took orbiting the moon on Apollo 8.

“It was a very, very memorable moment for me,” she says.