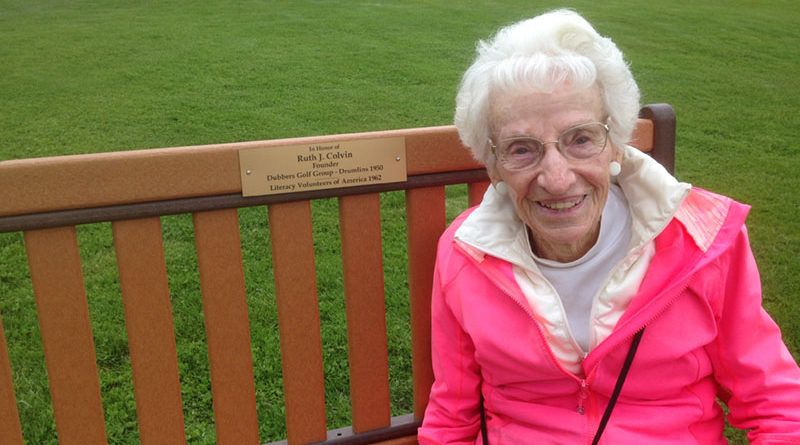 Founder of LiteracyCNY lives independently in Syracuse. She continues to write, exercise and play nine holes of golf every week

Living to 103 is an accomplishment few will achieve; however, for Ruth Colvin of Syracuse, it’s not just about living a long life but a leaving a legacy.

She founded LiteracyCNY (formerly Literacy Volunteers of Greater Syracuse), an effort she started in 1962 that grew to a national organization with more than 1,000 chapters.

Born Ruth Johnson in Chicago, she has always prized reading and education. Her father died when she was 12; however, her uncle had saved money for his brother’s childrens’ education. Once she had finished high school, she learned that the money was reserved just for her brothers — not her — since she was “just a girl.”

Undaunted, she attended a local junior college and in her 40s completed her business degree at Northwestern University in Evanston, Illinois. She doesn’t resent her uncle’s slight. She realizes that if she had enrolled elsewhere, she never would have met her husband, Robert Colvin.

“He was a very special man,” Colvin said.

The couple settled in Seattle, where Robert worked in the chemical industry.

His work relocated them to Syracuse. During World War II, he was one of 50 men selected to stay in the States because he worked for a company making essential supplies. As more of that initial group was called to war, Robert remained unselected until he was one of only five who continued to work.

“He was ready to go, but they felt he was more important here,” Colvin said.

During the War, he worked “day and night because that was his war job and what they wanted him for,” Colvin recalled.

The couple spent 73 years together until Robert died at age 99. The couple raised two children together.

Colvin became interested in the literacy issue in 1960, when she learned that 11,000 people in Onondaga County were functionally illiterate. The figure appalled her and she realized she needed to make a difference.

“I can’t believe someone could live a life without reading,” she said.

Beyond missing the pleasure of reading books, those who don’t read well miss out on many opportunities for education, enrichment and employment. Colvin felt determined to make a difference. She reached out to a number of community organizations, including Church Women United. Colvin recalled that they “were as shocked as I was” that few efforts had been made to combat literacy. The organization voted unanimously to sponsor a literacy project if Colvin would head it. She accepted the challenge, despite her lack of any experience or education in teaching. But her education in business proved helpful as she founded the literacy organization.

Colvin soon learned that non-native speakers represented about half of those who are functionally illiterate. Most of those are immigrants, which strikes a chord with Colvin.

“For most of us, our heritage comes from someplace else,” Colvin said. “My grandmother came from Sweden and someone taught her. I can pay that back by teaching someone else.”

After floundering for two years, Colvin tapped resources at Syracuse University to learn how to instruct her volunteers. She worked with a few reading specialists to discover how to effectively reach students.

“I’ve made many mistakes, but I’ve learned from them and I’ve learned by my successes as well,” Colvin said. “Find an unmet need. There are many with health, children, now with the virus. It’s endless. You don’t need to have that kind of background if you do research. People sometimes talk with me and learn I’m 103 and they say, ‘If she can do it, I can do it.’”

The program went national in 1971, supported by federal and charitable grants. The national organization was named Literacy Volunteers of America and remains headquartered in Syracuse.

The following year, Colvin began her writing career with TUTOR (Techniques Used in the Teaching of Reading) and READ (Reading Evaluation Adult Diagnosis), both with help from co-author Jane H. Root, as training manuals for volunteer tutors.

She also penned “I Speak English” as a guide for tutors in teaching conversational English, as well as “Student Involvement Guidelines,” “Tutoring Small Groups Handbook,” “English as a Second Language Tutor Training Workshop,” “How to Add Family Literacy to Your Program,” “Maintaining the Balance: A Guide to 50/50 Management,” and “LVA Works: A Guide to Workplace Education.”

To record the history of the organization, Colvin wrote “A Way with Words” in 1983.

Her title “Native Language Literacy” is about literacy in any language, as Colvin has traveled extensively to promote literacy. Her book “In the Beginning Was the Word” was based upon her experiences with learner-centered education, which focuses on student goals. The title references the Gospel of John’s opening words.

“Many people say they want to learn to read because of some goal, like wanting to read the Bible,” Colvin said.

She has also written “Off the Beaten Path” about her observations on world travel and culture. Former First Lady Barbara Bush wrote its forward.

Others books written by Colvin have been based upon her life experiences. “New Golfers” was a book for women becoming involved in the sport. “Great Traveling After 55” relates her travels with Robert.

“We had learned so much in our travels,” Colvin said.

Becoming a great-grandmother prompted “Rouse the Mouse and his Friends,” a children’s book that includes a puppet, so her young great-grandchildren who live across the country would feel more inclined to interact with her when they met.

Her latest title, released in June, is “My Travels Through Life, Love and Literacy: A Journey Over 100 Years in the Making.” The title is available through the Onondaga Historical Association (www.cnyhistory.org).

“I keep writing because I appreciate so much when I learn from others,” she said. “Don’t make my same mistakes; make your own.”

Her accolades include receiving the President’s Volunteer Action Award, which President Ronald Reagan presented to her at the White House in 1987; induction into the Women’s Hall of Fame in Seneca Falls; and the Presidential Medal of Freedom, awarded by President George W. Bush in 2006.

Colvin remains on the organization’s board. She believes that age is just a number and she plans to continue serving as long as she can.

Though the firstborn, Colvin has outlived all five of her siblings. Many of her friends have dementia or other serious health concerns. Rather than becoming morose, she remains thankful and stays busy.

“You’ve done nothing wrong if you have dementia, but I count my blessings my mind is still sharp,” Colvin said.

She recounts her blessings and her tips for healthy longevity in her latest book.

“I talk about the balances of life: physical, emotional, spiritual and mental,” she said. “You have no control over how you were brought up. Some have had a bunch of blessings; others have had troubles, but if you can find out why it all happened, you can see why you are the person you are today. I’ve learned a lot about myself.”

She’s a big believer in volunteering and has served as a Girl Scout leader, despite knowing nothing about outdoor life as a “city girl.” She learned alongside the troop.

In addition to the bachelor’s degree from Northwestern, she also has nine honorary doctorates.

“It shows what can be done if you keep opening your mind to help other people,” Colvin said. “It helps you.”

She maintains her physical health by walking 2,000 steps — she uses a cane for stability — and playing nine holes of golf every week.

“It’s a shorter handicap, but I keep doing it,” Colvin said. “Exercise brings more blood to the brain, so it helps me mentally.”

She typically works out on exercise machines a couple of times a week, too.

Colvin said that she has no appetite or taste at 103. “But I’m like a car. A good motor and tires are no good if you put no gas in it. I have to put nutrition in me. Cooking is not my specialty but it’s important to feed myself well.”

She creates meal plans and sometimes friends bring over food.

To keep her mind busy, she likes to complete sudoku puzzles, which she picked up on two years ago, and to perform research on topics that pique her interest.

“Now I’m researching Desmond Tutu,” she said. “I met him in South Africa.”

Colvin has traveled to 62 countries. She enjoys learning from everyone she meets. It’s not hard for her to talk with anyone, despite any difference from herself. A recent interaction she enjoyed was with a 22-year-old also walking in her neighborhood.

“I told her I’m probably the oldest person she’s ever met and told her I’m 103,” Colvin said. “We just stood there and talked. To me, it doesn’t make any difference what color you are, how old you are, where you’re from.”

In addition, she believes that emotional health is vital for a good life.

“Maintain your emotional health by forgiving and helping others,” she said. “You need love, trust and forgiveness. Unless you have those attitudes, that will make a big difference.”

She thinks that ties into spiritual health — something she believes everyone should possess.

Colvin said that she was interviewed by a Muslim man who wanted her to teach his wife English.

Colvin lives alone in her own home simply “because I can,” she said, though she keeps in touch with her son in Washington, DC and her daughter in California. She also has six grandchildren and eight great-grandchildren, the oldest of whom just graduated from high school.

She continues to develop friendships while serving on the boards.

“Because I’m teaching, I make friends,” she said. “If you have a purpose after you retire, you’ll keep going.  To keep yourself going, you must keep opening doors.”

In opening doors for locals, she has opened many for herself—and students far beyond what she imagined.

“I never dreamed the organization would go nationwide,” she said. “If it’s an unmet need, you fill it.”

Photo: Colvin at Drumlins Country Club in Syracuse, where she plays 9 holes every week.