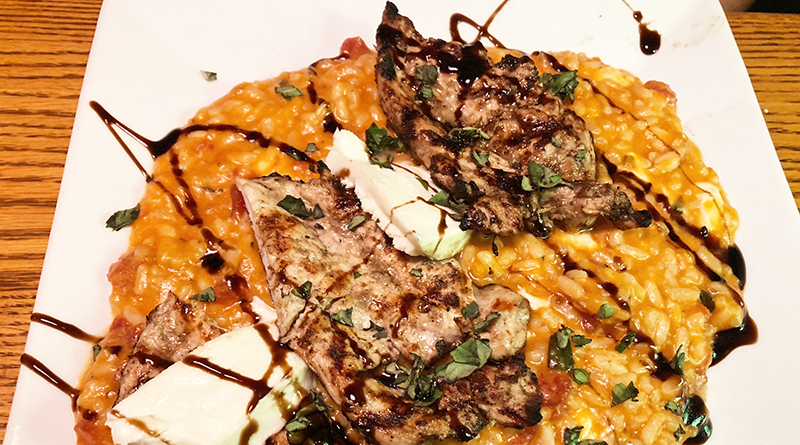 Should We Stay or Should We Retreat?

The village of Liverpool is home to many notable places and activities that can be enjoyed year-round — no matter the weather. The scenic neighborhood welcomes visitors from around the region for a taste of the outdoors and comfort food from different cultures and staples like pizza to burgers.

One particular restaurant, The Retreat at 302 Vine St., tries to accomplish a lot. It’s been operating for nearly four decades, which boasts seniority in itself. There is ample outdoor seating and a bar for fair weather, a place which hosts bands almost every night of the week. The interior décor is rustic, which goes well with all seasonal décor.

There is also that notable mannequin on the roof. Decked out in Syracuse University garb, it may not scare the crows away, but it does a great job at keeping Georgetown fans out (or keeping them on leash).

It wasn’t a busy night, and the sign at the host station read to seat ourselves, which we did, and our server was promptly over to offer us water and ask if we needed anything else.

After taking a few minutes to glance over the menu, it was decided we’d go with the Utica greens as an appetizer. Why not challenge The Retreat, which dishes up American fare, with a local nod? What’s more American than a local staple?

The greens ($8.75) were served up in a metal server. It was a sizable appetizer and worth the price tag. The CNY staple featured standard hot peppers and pancetta. Our batch wasn’t very spicy, however, so the heat sensitive won’t sweat it. The garlic and onions made themselves present, but weren’t overwhelming. The breadcrumb coating was a nice golden brown, and the asiago cheese made a fashionable entrance.

The only aspect that was a little off-putting was the soupy broth pooling in the grooves of the plate. With greens there will be some water or broth that may slide off and through the ingredients, but the amount seemed a little too much. Regardless, I’d probably order this appetizer again, plus ask for a little more heat.

The Retreat presented a bread and butter basket to share. The bread, which was topped with an oil and rosemary coat, came out warm. The butter proved to be a great topic of conversation and fascination. The garlic and chive butter, which was cradled in a plastic dipping sauce cup, was very flavorful. I’m not one to use a lot of butter on bread, but this was an exception with spreading a little extra.

The appetizers we sank our teeth into were the chicken Caprese risotto ($16.99) and the lamb chops Albanese ($17.99). Each entrée comes with a side salad, which is a nice addition to hear about when ordering from the adult menu. (The Retreat also offers a kid’s menu with burgers, chicken, pasta, and grilled cheese.) The salads were basic and epitomes of sides with messy piles of iceberg lettuce, olives, onions and tomatoes.

Despite the underwhelming veggie pile, the entrees were pieces of art. Each dish presented significant, yet not overwhelming, amounts of food. Sure, there is a chance a Retreat patron would feel guilty eating the entirety of these, but that’s due to not saving room for dessert.

Case in point — the lambchops did not make it to leftover status. The chops’ bones stood up and connected to a point, similar to that of The Three Musketeers’ swords. Some would say these were giving each other a high-five. The tender lambchops were cooked wonderfully — I actually told our server Melissa to give compliments to the chef. Each piece of meat was flavored with garlic and rosemary.

The lamb came with soft and fluffy mashed potatoes, which was topped off with a chianti demi-glaze. The potatoes were fresh, and the glaze was rich with flavor. When paired with a piece of lamb, the triple threat of flavor deserved a standing ovation.

Three prociutto-wrapped asparagus were part of the meal as well. The green stems were generously and heavily wrapped in the Italian ham. Although tasty, the entrée probably didn’t need the inclusion of this extra aspect; however, it was a fine added bonus to enjoy.

The chicken Caprese risotto was a pleasant surprise. Three pounded chicken breasts sat on a bed of the risotto, which spread out evenly across the plate as an Italian would present it instead of balled or plopped sloppily. The chicken was joined by pieces of mozzarella cheese, and balsamic glaze was drizzled across the top.

The risotto was tomato-based, based off of its red-orange color and flavor. To describe the taste will come across unappealing, just as a warning, because it was very reminiscent of the sauce found in SpaghettiOs or some Chef Boyardee canned pasta. This is simply due to the tomato. However, and this is a very large and bold exception, the flavor of The Retreat’s sauce is much better.

The chicken risotto dish was very filling, and leftovers were taken home. It’s a great cold weather entrée, which can easily be shared.

Aside the food, the service was really good; Melissa was very attentive, and a couple of the waitstaff who did not know I was writing a review, were very friendly and interacted professionally with the other customers. The amenities — table, utensils, and bathroom — were clean and sanitary.

Before tip, the total came to $47.23, which isn’t bad for three courses and no adult beverages. Although the menu doesn’t get a seasonal or regular update up with new offerings, The Retreat does offer a variety of dishes for everyone.