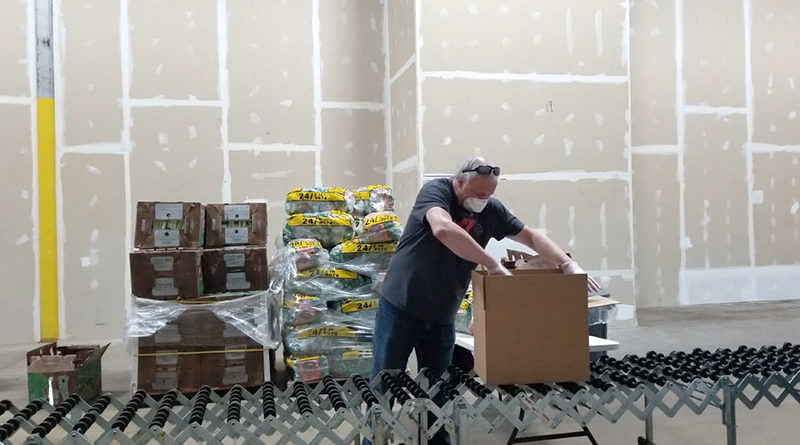 Joe Wrobel had been a donor to the Food Bank of Central New York for years, but once the 59-year-old Liverpool resident retired about           two years ago, he decided to step up his commitment.

“In the past, I was always donating to the Food Bank because I really believe in their cause and what they’re doing, so it was one of the first organizations I thought of when I determined that I wanted to volunteer,” he said.

He usually works two or three times a week at the Food Bank’s headquarters and warehouse, off of state Route 690 in the town of Van Buren. Calling himself “The Meat Man,” he sorts frozen meat and boxes it up so it can be distributed to the emergency food network.

Wrobel is one of about 800 regular Food Bank volunteers They come several times a week and work in the warehouse, and about 90% of them are 55 years of age or better, according to Lynn Hy, chief development director for the nonprofit organization. Others help to staff the mobile food pantry and perform clerical tasks.

Probably now more than ever, during the COVID-19 pandemic, Wrobel and his fellow volunteers are the vital links in the food supply chain, providing for local emergency food outlets, and the numbers underscore this. On its website, the Food Bank posted some statistics for March that show the far-reaching impact of the pandemic on the community.

These volunteers packed 9,000 food boxes in just that month. This equates to nearly 2 million pounds of food that were distributed, which is 500,000 pounds more than a typical month. It served 28,457 households, a 20% increase.

Once people become involved as volunteers, they become more aware of just how many people don’t have any means to get their next meal, and the pandemic has brought that into sharper focus, Wrobel said.

“One thing I’ve always said as I’m going through the steps and the process as a food bank volunteer, is there’s more than enough food to feed the community,” he said. “Everybody who needs food, who’s hungry, there’s plenty of food. We just have to get people to realize that and to figure out where to actually go get it.”

The Food Bank has put safety measures in place to safeguard its volunteers. The organization was able to secure a large warehouse space in East Syracuse with a conveyer belt that allows the volunteers to keep 6 feet from each other in respect for social distancing rules. They pack their portion of the boxes and move them down the belt to the next station.

There are two shifts Mondays through Thursdays and one shift on Friday mornings, with 10 volunteers per shift.

The Food Bank staff is aware that this large segment of its volunteer base is also the same age group that is considered to be more vulnerable to COVID-19. They have contacted the volunteers to explain the safety measures they have put in place, but also to reassure them that if they are hesitant about coming in at this time, then they should stay at home. With many opting to stay home and with the need so great, Hy said, the Food Bank has needed to bring in new volunteers.

For those interested in joining the Food Bank of Central New York’s volunteer team, visit www.foodbankcny.org and click on the “Get Involved” box and work through the application. Or call Matt Monaco, the community engagement coordinator, at 315-437-1899, ext. 223.

Photo: Joe Wrobel of Liverpool, one of 800 volunteers who have kept the Food Bank of Central New York active during the pandemic. “If you volunteer and do something for the community, helping others, you just get a great feeling,” he says.