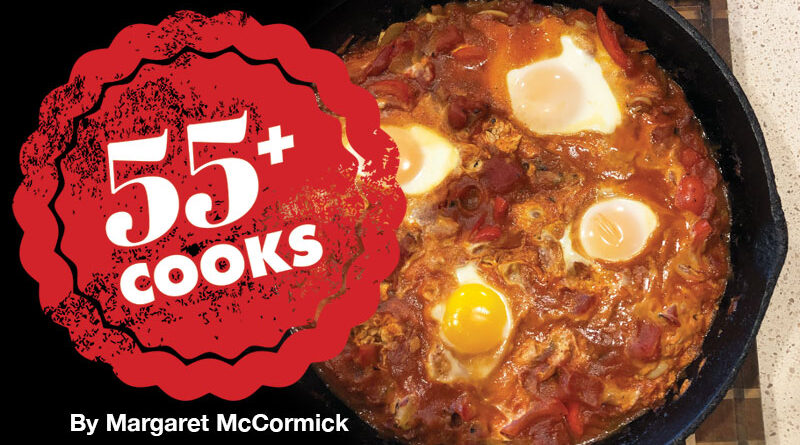 Words and Photos by Margaret McCormick

The evening meal is important at the Hurley house in DeWitt, even if it’s just supper for two most nights. Before going about their respective days, Dan Hurley and his wife, Judy Drucker, have a “morning meeting’’ to decide what will be on the menu. Often, Hurley is the one who cooks it.

Hurley, 69, retired after a long career in communications. He served as assistant vice president of government and community relations at Upstate Medical University for more than 30 years and now gives his time to the Cathedral of the Immaculate Conception, where he serves as a public affairs volunteer. He began his career as a sportswriter at The Post-Standard in the 1970s.

Hurley, one of nine children, learned to cook by spending time in the kitchen, watching his mother and reading cookbooks. He still makes the comfort foods he grew up with, like roasted meats (he roasts a chicken once a week), spaghetti and meatballs and broiled fish. “Much of my cooking seeks to mimic those fantastic meals,’’ he says.

In warm weather, Hurley likes to cook on a charcoal grill. He’s a square meal kind of cook — protein, starch, vegetable — who also likes to bake cakes, pies and other desserts and surprise visitors with warm popovers (see recipe) in the morning. Along the way, he picked up the art of preserving. He freezes summer blueberries, makes several kinds of jam and puts up fruits, applesauce and other things that offer a taste of summer in the middle of winter.

Hurley says cooking doesn’t need to be complicated and that advance planning is the better part of it. “You limit your options if you wait until late in the day,’’ he says.

How did you learn to cook? “Watching my mother inspired me and I probably had an interest in cookbooks from about age 10 or so. I had eight siblings and leftovers were pretty much non-existent. If you wanted something extra, you had to make it. Especially something sweet.’’

How would you describe your cooking style? “Reassuring comfort food. My mother put a full meal on the table for 11 night after night. Spaghetti and meatballs, meatloaf, broiled fish, roast beef with Yorkshire pudding, chicken and dumplings and homemade desserts of Boston cream pie, cakes, pies, cream puffs. Much of my cooking seeks to mimic those fantastic meals.’’

What’s your favorite thing to cook on a weeknight? “In warm weather, it’s probably anything on the charcoal grill with baked potato and a salad or vegetable. Cold weather it’s something more complex.’’

What do you like to cook when family and friends come over? “Braised lamb shanks or chicken cacciatore. Each dish is a little involved, so people think they are elaborate. Braising makes meat fall off the bone if done right. I also make a mean pan of popovers for breakfast when people stay over.’’

What have you been cooking during the pandemic? “Soup at least once a week feeds us for a few nights. Also, lots of shakshuka, a Mediterranean staple (see recipe). We had it in Israel a few years ago and love it. I’ve probably been baking more than anything. I go in streaks and have been known for a very adaptable New York Times plum torte recipe. We have access to fresh blueberries and look for ways to incorporate those. And I have continued to preserve tomatoes, applesauce, apple butter, blueberry and fig jam, plums and chili sauce.’’

What’s your favorite recipe resource? “‘The Fanny Farmer Cookbook’ pretty much has everything I’ve ever needed. My mother received hers as a wedding present in 1943 from my paternal grandmother. It’s timeless. I also have a lot of written recipes of my mother’s and use the New York Times cooking app on a regular basis.’’

What’s your favorite place to shop? “In a perfect world, the Central New York Regional Market late August, early September for produce. The rest of the time we spread it around between Wegmans, Tops, Aldi and Price Chopper. Specialty meats at Liehs & Steigerwald’s or BJ’s. And the addictive Pastas Daily Bread stretch bread.

Any advice for other cooks? “A few things. 1. Plan. You limit your options if you wait until late in the day. 2. Remember it’s not complicated. Protein, starch, vegetable. 3. Keep lots of onions, carrots, celery, chicken stock and canned tomatoes around.  4. Buy a good knife.’’

Shakshuka is a dish of eggs cooked in a chunky tomato and pepper sauce that can be eaten for breakfast, lunch or dinner (pictured, right). My wife, Judy, and I were introduced to it on a trip to Israel and have been making it at home ever since.
—Dan Hurley

Heat the oil in a 10-inch cast iron pan and sauté the onions, peppers and garlic until soft. Add the cumin and paprika and mix with the sautéed vegetables to release the fragrance of the spices. Add the tomatoes, pepper flakes and salt and bring the mixture to a simmer. After about 10 minutes the mixture will thicken a bit.

When the mixture has thickened, use the back of a large spoon to create four indentations in the sauce. Crack an egg in each indentation. Slide the pan into the oven and allow the eggs five to eight minutes to set (depending on your preference).

Serve the shakshuka with crusty bread or popovers (see separate recipe) and a side salad if you like.

From the blog “Sugar Dish Me.” sugardishme.com/the-biggest-fattest-fluffiest-popover-recipe/

Warm the eggs by placing them un-cracked in a medium bowl and cover with hot water (as hot as your tap will go). Let them sit for 10 minutes.

Preheat the oven to 450 F and move the oven rack to a low position (to prepare for huge popovers). Grease a popover pan thoroughly inside each cup as well as around the top edges.

Using a whisk, beat together the eggs, milk and salt until combined. The yolks should be completely blended in.

Add the flour and whisk until the mixture is frothy and all large lumps are gone. Quickly stir in the melted butter.

Divide the batter between the prepared popover cups. They should be about three-quarters of the way full.

Bake the popovers for 20 minutes and then reduce the oven to 350 F. Bake for another 10 or 15 minutes. The popovers will be very golden brown.

Serve immediately (with butter and jam if you like). Makes 6 large popovers.

Nominate a 55+ home cook for this feature! Email details, including contact information, to Margaret McCormick at mmccormickcny@gmail.com