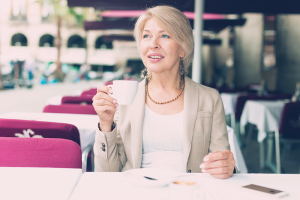 I’ve been noticing more women drinking and dining alone at bars than I have seen in the past. Let me clarify that to say “nice women.” And further, nice, older women.

So you might ask, “How do I know they’re nice women?” You’ll just have take my word for it. OK, so maybe not all are nice, but let’s give them the benefit of the doubt.

While men feel comfortable sitting alone at a bar, in the past I never saw many woman of my generation just walk in by themselves and order a drink. When I traveled alone for work, I’d either order room service or ask to be seated in a quiet corner of the restaurant where I could read and be left alone to eat my dinner — and most other women travelers did the same.

In discussing why that was, my friend Helen pointed out, “It was only 50 years ago that Syracuse attorneys Karen DeCrow and Faith Seidenberg tested the equal protection clause of the 14th amendment that public establishments couldn’t discriminate whom they served.” When they tried to enter McSorley’s bar in NYC, whose motto was “Good Ale, Raw Onions, and No Ladies,” they were refused service, and well… the rest is history.

But in addition to women’s growing independence, there are also more single women around, whether those who chose to never marry or those single through divorce or being widowed. And some women who are married may want to eat out some nights even if their spouse doesn’t.

I spoke both to bartenders and to women eating alone at a number of bars and asked about their experiences.

Jessica, a bartender at a very trendy restaurant, said, “You have to be ready for the experience of walking in alone and taking a seat at the bar for the first time. Get yourself into the right frame of mind where you feel comfortable with the situation. Most of the mature women that I serve have reached a point where they just don’t want to sit at home alone.”

The bartender continued, “When you’re single it can get lonely sometimes and at a bar you run into people who are also in the same situation. I think a lot of your experience depends on the bartender. My fellow male bartenders are gentlemen and family-oriented and look out for women patrons sitting alone. It’s important to us in our bar that we create a safe space.”

Dario, a maitre d’ at a very conservative, elegant restaurant, said, when I asked him about women sitting alone at his bar: “Why not? But try to go where you know somebody, either the manager, the bartender or the wait staff, so they’ll watch out for you.”

A bartender at an establishment where there is music and dancing, Justin said, “A good bartender looks after their guests. You should always feel comfortable talking to us because by the nature of the job we chose, we are conversationalists. I always tell women that’s it’s OK to get up and join others on the dance floor. As I get to know my customers, if they want to engage in conversation, I’ll often introduce them to others at the bar.”

“The women I see who sit alone at the bar are self confident and usually talkative,” said John, a bar manager at a hotel. “Bartenders learn when to talk and when to leave you alone, if that’s what you’d prefer.” But if you’re not acquainted with the bartender, how do you start a conversation? “As a for instance, say you’re drinking wine, you could ask ‘what do you suggest,’ then, ‘may I try it’ and that will lead to conversation.”

But he also issued a couple of caveats — “Be aware of how much you drink, both for how you come across to others and for your own safety. Also, be considerate of the bartender’s time; if they are really busy trying to keep up with orders, that’s not a good time for conversation.”

Diane, a bartender, said that location is important. “I would only go to well-established places in safe neighborhoods and would first go online and read reviews about the place. If it’s your first time there, be open with the bartender and ask them to take care of you. It’s also important how you connect to a place and there’s many elements to consider. For instance, do they play music that you like? Is the ambience and food to your liking? And try to find those places where the bartender is consistently there.”

I really liked the women I spoke with and got into some great conversations. I sat next to a lovely woman, Randi, who having left work late, just wanted a drink and a good meal and didn’t feel like going home and eating alone.

“People don’t look twice anymore at a woman alone at a bar. It also depends on how you feel with it and I’m good with eating alone. If I like the bartender and they’ve made me feel comfortable, then I tend to go to that place more often.”

BJR from Ontario, Canada, said, “I always feel OK alone but I also try to be aware of the vibe I’m giving off. If I feel like talking, I will, but on the rare occasion the conversation becomes uncomfortable, I don’t hesitate to make eye contact with the bartender and have him move me to a different seat. The bartender is always your connection — I’ve never been anywhere that they haven’t made me feel comfortable.”

“Sitting at a table, you’re lonely,” said Roseanne. “At a bar there’s always people to talk to and when you want to get up and leave, you do.”

OK, having read this far, are you willing to give it a shot?

What I found out certainly made me feel comfortable with this option. Think about a place you’ve been where you like the food, the music and the general ambience. For me the music is important because while some people like loud, pounding music, I don’t. Then pick a night that isn’t crazy busy and you can get to know the bartender.

Let me know how it goes.