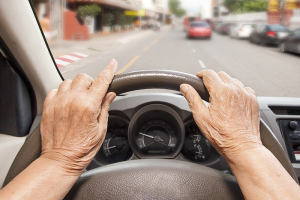 It will become increasingly difficult to tell the new autonomous cars (cars that drive themselves) from those driven by grandma, who sits so low in the seat that only her hands can be seen on the steering wheel.

The percent of senior drivers is increasing rapidly in many areas of the country because we are living longer — and younger drivers may not be driving their own cars in this modern society, particularly in large metropolitan areas. They will either call Uber or an autonomous automobile to pick them up and take them where they want to go. Every major automobile manufacturer is scrambling to design the car that drives itself — even Google is getting in the game. This growing trend will mostly leave only us 55 plussers to do our own thing behind the wheel

Florida has the most senior drivers in the country and the state government does its best to accommodate those of us who have seen our younger driving days. Recently I renewed my Florida driver’s license. The only requirement was an eye test. It will not be necessary to renew my license again until 2023 when I will be 90 years of age.

Driving in the sunshine state is (to say the least) challenging. Half of the senior drivers can’t see too well and the other half can’t hear too well. When the traffic light turns green, seldom does the car in front of you react immediately. Often, it takes a little peep on the horn to get them to react at all. Our auto insurance in Florida costs more than twice that of Syracuse because of the higher accident rate — partly due to senior drivers.

My mother lived near our Florida residence in a small apartment complex. Her car was parked outside the door and she drove it until she was well into her 90s. That car was her independence. She fought me every time I suggested that she sell it and let me drive her anywhere that she might want to go.

One day she drove to a nearby shopping mall and while entering the parking lot she side-swiped a car coming out. The mall security policeman saw it happen and confronted her as she parked her car. “Lady do you realize that you hit another car as you pulled in here?” She replied, “I thought I felt a bump.” Fortunately, Florida law requires that if an elderly person has a traffic accident they must pass a driver’s test to retain their driver’s license. Knowing that she couldn’t pass the test, my mother voluntarily turned in her license.

Of course, not all elderly drivers are bad drivers. I still race cars and periodically take refresher courses in high performance driving. The late movie star Paul Newman was a professional racer and regularly raced at Daytona International Raceway and other main line tracks into his 80s. As long as you keep yourself in shape there is no reason why your driving skills should deteriorate with age.

On the other hand, keeping up with traffic on interstate highways where today’s high performance automobiles run bumper to bumper at speeds of 80 MPH or more, driving is not for sissies.

When the time comes when you no longer feel comfortable in this environment, it is time to hand over your keys.