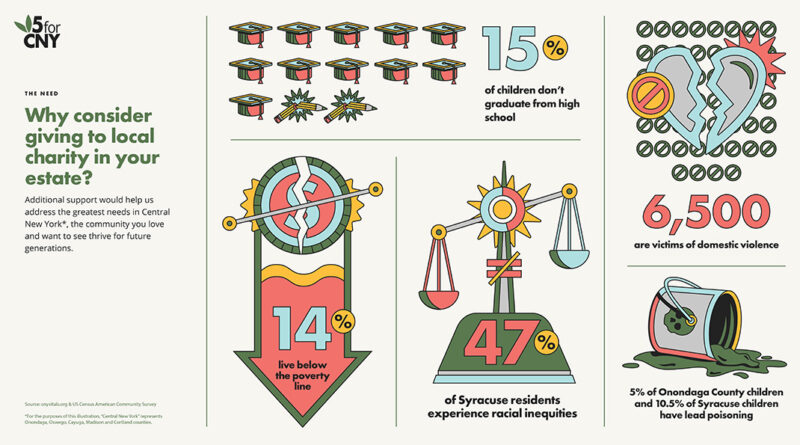 Research commissioned by the Central New York Community Foundation has found that a combined net worth of $245 billion in Onondaga, Oswego, Cayuga, Madison and Cortland counties is poised to experience an 11% transfer between generations, totaling $25 billion over the next 10 years.

Over this larger region, the combined household net worth was calculated to be $832 billion. $84 billion of that is projected to transfer to the next generation within 10 years.

We are releasing this data in an effort to encourage residents to set aside a portion of their assets for the long-term benefit of the region. Many of these assets are likely to be designated to heirs who live outside our community, decreasing the flow of support that Central New York charities rely on.

A robust charitable ecosystem in Central New York results in a more prosperous community. Philanthropy sounds like a lofty word, but what it really means is things like investment in affordable housing, advancement of healthcare and childcare for families, stimulation of economic growth and reduction of economic inequality.

LOCUS’s research analyzed what would happen if 5% of the assets set to transfer through Central New York’s probated estates were invested in permanent endowments for the charitable benefit of the community. Charitable endowments are invested to grow over time and last in perpetuity. A portion of the earnings from funds are paid out in grants to nonprofit organizations.

Following that logic, if 5% of the assets transferring through estate gifts in the five-county region over the next ten years — an estimated $1.3 billion — was placed in an endowment, a potential $74 million in annual grantmaking could result. That could grow to $285 million per year within fifty years.

While these large figures initially seem daunting, they turn out to be quite practical when you drill them down. Per household, the average value of assets set to transfer over the next 10 years is $79,700, so an average gift of $4,000 from each household would reach the foundation’s goal.

Our 5forCNY campaign, which was designed to encourage residents to leave 5% of their assets to a charitable endowment, presents three ways individuals and families can give through their wills or beneficiary designations: by giving to a general-purpose fund; establishing a fund of their own to create a legacy; or donating directly to a local charity’s endowment.

In just a few easy steps, the local organizations and causes that you care about could continue to receive your support long after you are gone – greatly improving the lives of your family, friends and future generations.

Individuals interested in learning how to establish a gift in their estate are encouraged to visit 5forcny.org.

Thomas Griffith, ChFC, AEP, CAP serves as vice president, development at the Central New York Community Foundation. He can be reached at 315-883-5544 or tgriffith@cnycf.org.