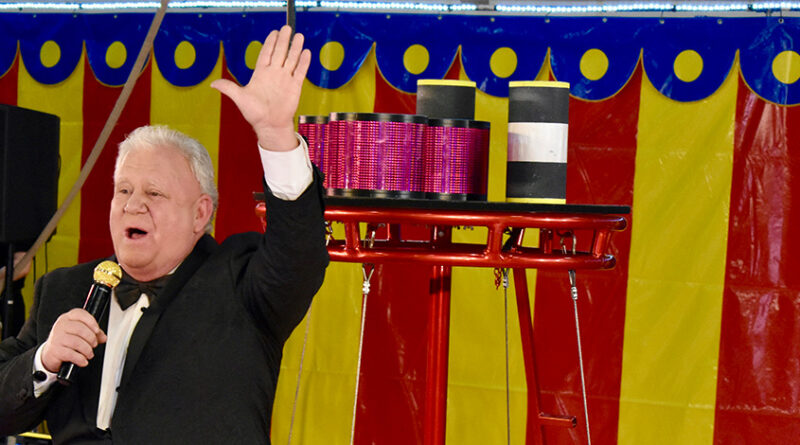 With barely two hours before showtime the school gymnasium had morphed into a popcorn-scented circus wonderland ready to greet the crowds of children and parents soon to arrive.

The transformation occurred at breakneck speed with everyone — except a 9-year-old who doggedly practiced his juggling — unloading and setting up with commando-like precision.

On one end of the gymnasium they erected the ring and backdrop, ran cables and hung speakers and lighting. At the other they inflated balloons and stocked toys, spun 30-pound bags of sugar into cotton candy and popped popcorn.

In the middle of it all was Billy Martin.

The charismatic, friendly-faced owner of Billy Martin’s Cole All-Star Circus is a hands-on boss, working alongside everyone else during set up and then seeing to the smallest details, such as positioning the spotlights just right so they bathe the performers in light.

Martin sets a grueling pace for himself and his circus. Working with school clubs and community groups that sell circus tickets as a fundraiser, they crisscross New York and Pennsylvania beginning each winter. Working seven days a week and living out of campers, they visit more than a hundred schools by season’s end in spring.

“It’s a lifestyle; you have to eat, drink and breathe it,” Martin said. “It’s not for everyone.”

Circus life takes dedication and perseverance, Martin said. He would know. During his years on the road he’s contended with recessions, equipment breakdowns and injuries as well as bomb scares, whooping cough outbreaks and awful weather. Snow days are the reason the circus runs seven days a week without a scheduled day off. Once or twice a month a snow day is bound to cancel a show.

And there’s always another town, another school gymnasium on the schedule. Martin has driven all night to make it to shows and led the circus caravan through treacherous blizzards to get to the next location on time.

On a recent morning the circus left Otsego County headed for a 7 p.m. performance in Oswego County. About halfway into the 140-mile trip one of the box trucks carrying the show hit a pothole on the Thruway and got a flat tire. A long delay and $579 later, the circus got back on the road and arrived at its destination. The next day they had to be on the road by 7 a.m. to be in Canandaigua for several afternoons shows.

“It keeps you on your toes, it keeps your mind going,” Martin said. “You always have to anticipate things.”

Martin was in second grade when the teacher did a unit on the circus. Mesmerized, he was soon putting on shows in his bedroom. His mother helped him build a model circus and he eventually checked out every circus book on the shelves of the local library. In 1972, 12-year-old Martin met James Cole, a veteran circus owner, at a show.

Circuses had long followed a pattern of touring in the spring, summer and fall and then going into winter headquarters. From his home base in Penn Yan, Cole staged performances for children visiting on school field trips. In the 1930s he hit upon the idea of filling the dormant winter months with a touring circus, reasoning that if people couldn’t get to the circus, the circus would come to them.

The show was small enough to fit in a high school gymnasium and eventually became a fundraising project for schools. Art classes designed the posters and the band provided the music.

“It was a unique and marvelous thing,” Martin said. “He was way, way ahead of his time.”

When he first met Cole, Martin exclaimed that he wanted to join the circus. Cole sent him the circus’s route cards and whenever there was a performance nearby Martin dragged his parents to the show. By then his mother had sewn him a ringmaster’s coat and Cole would introduce him at the beginning of shows.

When the circus’s route card arrived in the mail the following year Martin was puzzled by three dates that said “Pending.” He pulled out an atlas and tried looking up Pending without success. So, Martin called Cole long-distance. The circus owner laughed and explained “Pending” wasn’t a place, but a placeholder for three dates that fell through.

Martin suggested he could book those dates for Cole, who chuckled and agreed to mail him the show contracts. Martin lugged out his father’s Royal typewriter and composed several letters. Weeks later he called Cole and told him he had booked all three dates.

“He couldn’t believe it,” Martin said. “He was thrilled.”

Cole paid him $50 for each show he booked. Martin kept the check and never cashed it. From then on, his desire to be in the circus never waned. He developed a balancing and juggling act, managed to wrangle a job and found a family that agreed to let him live with them while touring.

He graduated from high school at 17 and the next day his father drove him to New Jersey to join the Famous Hunt Circus, a big top circus that toured the Northeast.

“He thought it was just going to be a phase and I’d get it out of my system,” Martin said. “That was 45 years ago.”

Martin continued touring with big top circuses in the summer season and joined Cole’s circus in the winters. He got a crash course in the circus business and a decade later when an 80-year-old Cole decided to retire, he asked Martin if he wanted to take over the show. Martin agreed and took the show on the road solo in 1988.

Martin, now 62, still takes his circus on the road each year.

His home is Olean, but he only spends a few months a year there. In the summer and fall Martin and his wife, Angela, who is an aerialist in the show, run a circus under a big top at the Adventureland theme park outside Des Moines, Iowa.

His Cole All-Star Circus, however, typically operates with about a dozen people, which means he serves as ringmaster and light and sound technician. He does everything from booking shows and parking the campers, to meeting the principal and glad-handing school custodians.

He’s usually up by 5 a.m. and gets on the computer to respond to email and handle other tasks such as providing schools with insurance certificates, coordinating with clubs and placing refill orders for toys, balloons and snacks.

But it’s as ringmaster that Martin shines. Clad in a tuxedo, he embraces the role wholeheartedly. He has a commanding presence and his deep baritone has a soothing golden tone when he introduces the show and each act (he even sings briefly). His personality has the warmth of a department store Santa Claus and it’s not unusual for youngsters to appear at his side during intermission to meet him.

During the 90-minute show, however, Martin is content to keep the spotlight on the performers, who typically each have two acts. This season’s tour included two aerial acts, a costume quick change performance, a foot juggler, and unicycle and balancing acts among others.

Martin dubbed the tour the “Time to Have Fun Again Tour” since it was the first time he’d been able to take the circus on the road in nearly two years.

In 2020, the pandemic stopped the circus in its tracks with 10 weeks of dates remaining, leaving Martin with a $30,000 printing bill for the tickets and posters from the canceled shows. He applied for the first round of the federal Paycheck Protection Program for small-business owners, but the money had already run out and he wasn’t eligible for later rounds. He and his wife scrimped and saved and took part-time jobs to pay the bills.

The circus in Iowa went on as planned in 2020, but when November rolled around Martin found himself, an admitted creature of habit, stuck at home and with no upcoming tour to plan for. He began piecing together a tour last year, but when COVID-19 surged in January was forced to postpone some dates.

But it was only temporary and, after 22 months of not being on the road, Martin and the circus set off. Martin said they’ve had some of the biggest crowds he can remember, something he attributes to pandemic-weary people missing the circus and wanting to experience live entertainment again.

As hard as the last two years were, now that he’s back Martin doesn’t plan to give up the circus life anytime soon. He said he’d like to continue running the circus another 15 years, when it will be a century old.

Aside from a deep belief that he’s doing what he was meant to do, Martin said the experience of traveling with the circus is just as energizing as it can be exhausting.

“Every night is opening night and that’s the way you have to look at life,” he said. “Every day is going to be your best day.”