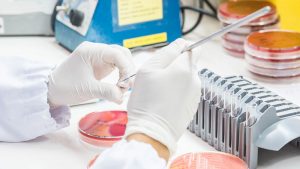 It’s nearing Halloween as I write this, which reminds me that we have created a monster. Or, rather, billions of little monsters called drug resistant bacteria.

Multi-drug resistant (MDR) bacteria have emerged, evolving to resist many different antibiotics. Infection with one of these strains is very bad news for a patient.

The pace of new antibiotic development can’t keep up with this problem. About 700,000 people worldwide die from MDR infections each year. The United Nations predicts that number could reach 10 million by 2050.

Some scientists are trying an entirely different approach to controlling MDR bacteria. They are using bacteriophages — phages for short. These viruses can’t grow, move or make energy on their own. But when a phage drifts into and sticks to a compatible bacterium, it latches on and inserts itself into the bacterium’s genome. It hijacks the bacterium’s cellular machinery and turns it into a factory producing more phages. Eventually all the new phages burst out, killing the bacterium.

Using phages to combat disease is actually not a new idea. After their discovery in 1910, phages were used against typhoid, dysentery, cholera and other illnesses. When antibiotics began to be used in the 1940s, phage use fell out of favor in the western world. Antibiotics were cheaper to produce and easier to use. Also some of the research relating to phage use was controversial.  No phage treatment is approved or available for use in the United States. Phage treatments are still commercially available in former Eastern Bloc countries.

In 2016, biologist Benjamin Chan from Yale used phage treatment to treat a patient’s post-surgical pseudomonas aeruginosa MDR infection. This particular strain resisted antibiotics by a surface pump that sent antibiotics back out of the cell before they could penetrate sufficiently to kill the bacteria. Chan selected a phage capable of entering the bacteria by latching on to this pump. Individual bacteria that lacked the pump could survive the phage only to be killed by antibiotics. The patient recovered and lived several more years before succumbing to unrelated causes.

Scientists use several approaches to combat disease with phages. One method is to administer a cocktail of phages that simultaneously attack different targets on a particular bacterial strain’s surface. Others use a sequential plan, first using one type of phage, followed by a second type, and so on.

Which approach is best remains unknown.

Most phages used so far occur naturally in the environment. Scientists are also beginning to engineer phages designed to attach to specific bacterial cell receptors.

Phage therapy currently is only available under the compassionate-use system.  This is a process, usually difficult, where the FDA permits patients to try experimental drugs outside of clinical trials. The cost to treat a single patient with phage therapy is currently estimated at $50,000.

Much more research is needed to determine whether, when, and how phage therapy will fit into mainstream medicine.