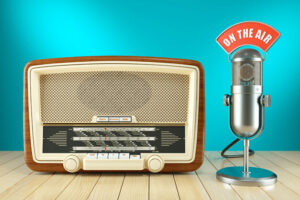 ‘Radio’s surge in popularity during the 1930s and 1940s was brief. After World War II, television began to take center stage, and, bit by bit, the radio that we knew and revered as kids morphed into the much blander and less imaginative radio of today.’

This year marks the 100th anniversary of the first radio broadcast in the United States.

KDKA in Pittsburgh went on the air on Nov. 2, 1920, and broadcast the results of the Harding-Cox presidential election. In the era before television, before the proliferation of social media and smartphones, radio was an upstart medium that eventually would challenge the dominance of the print industry.

KDKA broadcast the first major league baseball game in 1921 between cross-state rivals, the Philadelphia Phillies and the Pittsburgh Pirates.

Within about a 60-mile radius of Syracuse, there are 72 public and commercial FM stations and 40 AM stations.

WSYR (570 AM) is one of the oldest radio stations in the state. First broadcasting on Sept. 15, 1922, as WMAC in Cazenovia, it moved to Syracuse in 1928 and changed its call letters to WSYR. The station is known for broadcasting local news and talk shows. WSYR is not among the 10 oldest stations in the United States, but nine other New York stations are.

Born in the pre-television era, I realize that the radio of my youth died young. This show business giant should have been at the peak of its creativity, yet, at only 30 years of age, the golden age of radio was already declining.

Any American born before or during World War II remembers how great radio used to be — before the all-music niche formats, the endless talk by commentators on the left but mostly on the right or by sports hosts taking call-in views from listeners.

Radio and its wide range of live music, comedy, variety shows and dramatic programming served as a welcome escape from the troubled times during the Depression and World War II. In fact, many called it “escapism,” but radio news gave us a strong dose of reality, too.

My contemporaries and I grew up with Jack Armstrong, the Lone Ranger, the Shadow and Uncle Don. Younger audiences believed soap operas began with television, but we knew better. “Ma Perkins,” “Stella Dallas,” “Just Plain Bill,” “Pepper Young’s Family” and “Backstage Wife” were just some of the soap operas which attracted millions of afternoon radio listeners, mostly housewives.

I can hear the sounds of the radio of my youth until this day. Dramatized radio programs were very important to me. How many times did I gulp down my supper so I could sprint to the living room to listen to the next episode of The Shadow, Gangbusters or the super scary Inner Sanctum and its opening sequence of a squeaky door that scared me half to death.

There were quiz shows, such as “Queen for A Day,” “Dr. IQ, the Mental Banker,” “Stop the Music and many others.”

Many legendary entertainers made it big on radio before transitioning to TV and motion pictures. Included were Bob Hope, Bing Crosby, Lucille Ball, Jack Benny, George Burns and Gracie Allen and Raymond Burr (of Perry Mason and Godzilla fame).

If it sounds as if I had a love affair with radio, you’re right. The radio I loved is gone, but the memory lingers on.

When we were kids, we talked incessantly about radio — not only about the programs, but we also played games emulating our heroes. For example, my favorite cowboy was Roy Rogers; my best friend’s favorite was Gene Autry.

We went crazy over the premiums being offered. With just a cereal boxtop, we could have the Little Orphan Annie decoder ring, so we could unlock the message at the end of each program.

I would drink gallons of Ovaltine so I could accumulate three inner seals of the drink to send away for the Captain Midnight Secret Squadron decoder badge. By the way, I drank my Ovaltine from a Roy Rogers mug which was shaped in the likeness of the King of the Cowboys.

No one could suggest that Buck Rogers’ girlfriend, Wilma Deering, wore a spacesuit that fitted too snugly for a boy my age to look at. The best part was that I didn’t have to be reprimanded by mom for having impure thoughts.

Until this very day, I entertain my grandchildren by pretending that I am the radio announcer on The Adventures of Superman. “Faster than a speeding bullet, more powerful than a locomotive, able to leap tall buildings at a single bound. Look, up in the sky, it’s a bird, it’s a plane, it’s SUPERMAN. Yes, Superman, strange visitor from another planet, who, disguised as Clark Kent, mild-mannered reporter for a great metropolitan newspaper, fights a never-ending battle for truth, justice and the American way.”

Then there was the opening signature for the Henry Aldrich program — “Hen-reee, Henry Aldrich!” “Coming, mother.” (I would try to mimic Mrs. Aldrich, who sounded a lot like my mother calling me for dinner.)

Today’s listeners, who often use FM radio largely as background noise, can’t comprehend how radio could have held a listener’s interest for several hours at a time.

Simple: imagination. In fact, when some of the radio programs made the transition to TV, audiences were disappointed, because the images they had conjured in their minds couldn’t measure up to what they were now seeing on the small screen.

One enormously popular program, “Amos ‘n’ Andy,” had to change the stars of the show when it went to TV because Freeman Gosden and Charles Correll, the originators of the program who also played the title roles, were white men playing Black characters

Some historians say that radio helped create a sense of national belonging in what had previously been a disorganized group of regional identities. Others point out that the pros and cons about the promises and dangers of today’s internet are very much like the arguments that accompanied the debate when radio had begun to become popular and pervasive.

Some were enthused that radio would be a powerful force for spreading knowledge to a large population that had previously been separated by geography and income. Others, though, feared that the propriety and taste of radio programs could defile the sanctity of the home. They also were concerned that if families stayed home to listen to the radio, it would limit civic and social participation and also cut into church attendance.

Radio’s surge in popularity during the 1930s and 1940s was brief. After World War II, television began to take center stage, and, bit by bit, the radio that we knew and revered as kids morphed into the much blander and less imaginative radio of today.