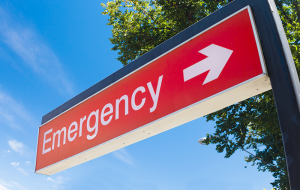 Young, healthy teenagers believe that they are indestructible.

They are filled with youthful exuberance and think they will never encounter any health issues. They don’t yet realize that, as they progress through life, they are very likely to get something that they don’t want.

The human body is amazing, but it is unable to function perfectly forever. I have experienced many bumps and bruises along the pathway to aging. Each health experience leaves its mark and we learn something from it. I thought it might be interesting to share my latest health issue with readers, in the hope that the story may help them cope with the realities of aging.

One Monday afternoon, I ate a prepared meal from a local supermarket. About an hour later, I had a pain in my stomach and I became violently ill. I thought that food poisoning was at hand. I called my son on the phone and yelled, “Take me to Crouse!” which is a familiar motto in the Syracuse area.

The emergency room at Crouse Hospital was packed with people, many suffering from the flu. I patiently waited my turn and was given a CAT scan and X-rays. A number of doctors and nurses at Crouse were students of mine from my general biology course at Syracuse University. One of my former students, a doctor in the ER, said hello and reported that I did not have food poisoning. I had a blocked intestine.

While I was lying on a bed in the emergency room, a doctor and an assistant entered. The doctor kept apologizing for some procedure that he was about to do. I didn’t think much about his comment, until he actually did the procedure. It involved inserting a nasogastric tube through my nose down the esophagus to the stomach to drain the stomach and relieve bloating.

For those of you who have had this procedure done, my comments will be no surprise. It was one of the worst experiences in my life.

The doctor started putting the tube into my right nostril, but it didn’t seem to work. So, he switched to my left nostril. As he forced the tube through my nose to my stomach, I choked and screamed in agonizing pain. I recall thinking, “What sins did I commit to deserve this?”

After the tube was in place, I was put in a hospital room. Intravenous tubing delivered fluids and I stayed there for four days, without eating any solid food at all. Worst of all, I couldn’t talk because of the NG tube in my throat. Talking is what I seem to do best (or most), and I was frustrated at not being able to converse with my roommate on the other side of a heavy curtain. I didn’t say anything to him for four days. (Maybe that was a blessing for him?)

There was a large TV and a clock mounted on the wall in front of me. Since I didn’t feel well, I didn’t feel like watching TV. Nor could I read a book. I did stare at the clock.

Several doctors whom I knew dropped in to say hello, and we had friendly, one-way conversations. Other visitors were unwanted, but they came anyhow. My cell phone was constantly ringing with text messages from my family.

No place for lady friend

I wasn’t very responsive, but it felt good to feel loved and cared about. My companion visited me, but I told her not to come anymore. I didn’t want her to see her “he-man” boyfriend immobilized with a tube down his nose.

The nights were endless. Just when I would start drifting off to sleep, I was awakened by the familiar hospital call: “Time to check your vitals.”

Nonetheless, the doctors, nurses and staff very much impressed me. Everyone was friendly, caring and competent. It is a wonderful feeling to know that you are helping another human being.

Personally, I would be incapable of working in a hospital to accomplish this outcome. I would be fearful of catching every disease that I encountered. I would be terrified that I would make a bad decision that would kill my patient.

‘Being in a hospital bed for several days dulls your mind. You become listless and bored. You get into a state of numbness.’

I tried to help people through my teaching of science to more than 45,000 students during my career. Everyone can find a way of helping others that fits his or her character and personality, and everyone can enjoy that wonderful feeling of satisfaction. Do something good for someone today and you’ll see.

Being in a hospital bed for several days dulls your mind. You become listless and bored. You get into a state of numbness.
You feel like life is blurred. Bowel functions finally started returning, but I could no longer stand the NG tube in my throat. The pain and discomfort was such that I could not sleep at all my last night in the hospital.

I watched the clock every minute all night, wondering why the hands of the clock did not move faster. I thought about Albert Einstein, spacetime and his theory of relativity. I also thought, “This too shall pass.”

The next morning, the doctor appeared. I said, “I can’t stand this NG tube.” He replied, “OK, we’ll take it out.”

I tried to prepare myself for another episode of agony, like what I experienced when they inserted the tube. I closed my eyes and waited in fearful anticipation. There was a very brief choking sensation. “What happened?” I asked, “Aren’t you going to take it out?” “It’s out! It’s in the garbage,” he replied. Wow! What a relief!

My daughter-in-law drove me home while I was in a state of exhaustion from not sleeping at all for a full night and from the overall hospital ordeal. When I left the hospital, I had the same feeling that I get after I drive through the Lincoln Tunnel leaving New York City and reach the open highway. Freedom, at last!

As an addendum to my hospital adventure, I found out that, while I was in the hospital, my car‘s battery had died in the near-zero temperatures. I had forgotten to ask someone to start the car every day while I was hospitalized.

It took a number of days to recover from this hospital adventure. Despite my admiration and respect for people in the medical profession, I want to avoid them as a patient. Unfortunately, the likelihood of illnesses increases dramatically as we move past 55-plus toward the inevitable.

A gerontologist told me elderly people should try to avoid hospitals and nursing homes and exercise regularly. My advice to older people is to have as much fun as you can, laugh a lot, and squeeze in as many experiences as possible. There is always more to know and there is always a new adventure ahead.