Thanks to PT techniques, some surgeries can be avoided 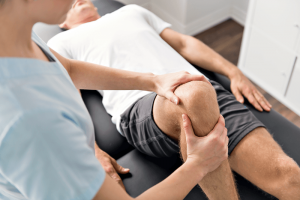 Over the years my musculoskeletal system has taken many hits, starting with a herniated spinal disc while water skiing at our home on Owasco Lake 50 years ago. Fortunately, my first encounter with orthopedic injury also opened the door to conservative medication. After weeks of suffering from the herniated disc I was admitted to Upstate Medical Hospital in Syracuse under the care of physician Hansen Yuan, who is still practicing medicine a half century later. The doctor had scheduled me for surgery but the day before he came and sat by my bed and explained, “After looking at your X-rays I believe that you can avoid surgery by doing physical therapy. This will not be easy and the pain will not subside right away but in the long-run your back will be stronger; the herniation will shrink and you will save your disc.”

My wife drove me directly from the hospital to the physical therapist. I was in pain and not at all happy about this situation but after a couple of weeks of PT the pain subsided, I could walk normally, and I learned a lesson that served me well for the rest of my life.

My next encounter with the healing power of physical therapy occurred many years later. I was walking down the stairs of our townhouse at Martin Point in Auburn — foolishly reading a magazine on the way down (no, it was not 55 PLUS). My foot caught on a carpeted step and pitched me into the air landing me on the wood floor beneath. I could not get up because two of my four quadriceps tendons had ruptured. I called 911 and soon an ambulance delivered me to Auburn Community Hospital’s emergency room and from there to orthopedic surgeon Marc Pietropaoli.

Pietropaoli was another doctor who practices conservative medication. I was scheduled for an operation next day but he called me at home the night before and said, “I have been studying not only your X-rays but also your MRI, which gives a much better picture of the injured tendons. I believe that with extended physical therapy you will have a better result than with surgery,” he said. Her added that “most doctors would operate but I have been schooled in a relatively new philosophy that utilizes modern diagnostic machinery and less invasive procedures. When a doctor has only a scalpel as a tool then everything looks like it needs an operation. I operate on far fewer patients and with much better end results.”

Pietropaoli has his own physical therapy department to ensure that when PT is prescribed it is correctly done.

My daughter, who owns her own physical therapy business in Rochester, tells me that half of her patients are people who should never have had orthopedic surgery in the first place.

Pietropaoli is one of the few orthopedic surgeons in the country who is trained for subchondroplasty, a relatively new procedure that is an alternative to knee replacement. Many times, when a patient has knee pain, it is not in the knee joint but the result of tiny fractures in the femur (thigh bone) beneath the knee joint (an MRI can reveal this). When this is the source of the pain, a simple injection can fill the tiny fractures in the femur bone (which heals the bone) and resolves the problem. I would happy to share my experience — just drop me an email at the address on top of the page.

The human animal is a marvelous creature. Many times it can heal itself without some of the expansive (and expensive) medical procedures that have evolved over time. As computerized medical science (artificial intelligence) develops, perhaps it can turn us backwards toward the time when man could be more self–sufficient and healthy.