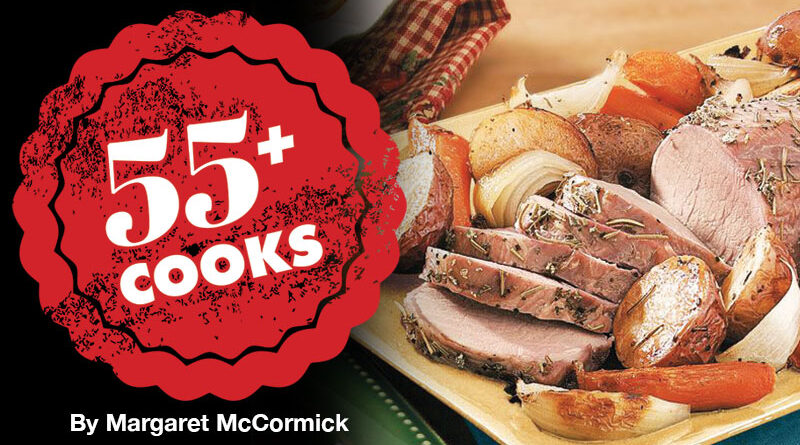 Vito Sciscioli (pronounced shih-SHOW-lee) is retired but likes to stay active. He and his wife, Janet, sing in the choir at University United Methodist Church. This time of year, you might find him in his garden, though he got tired of fighting deer and woodchucks and other critters and now grows mainly tomatoes and herbs.

Now that he has more time, he enjoys spending time in the kitchen and cooking for family and friends, when possible.

He’s not a fussy, detail-oriented cook. He describes his cooking style as “straightforward,’’ using ingredients that are familiar, readily available and seasonal.

He learned to cook by watching his mother, and later from a variety of cooking shows on PBS and the Food Network, including “Cook’s Country’’ and “America’s Test Kitchen’’ (and their magazine counterparts, as well). He has a fondness for Italian American food, like cioppino (fish stew) and pasta dishes, and he likes to grill.

“I am definitely not a French cook, and most dishes [I make] are pretty straightforward and do not require advanced techniques,’’ Sciscioli says.

Sciscioli and his wife live in Syracuse. They have three adult children and one grandchild (“who has not figured out that eating my food will render big benefits to him”). Some family members are vegetarians. When cooking for them, Sciscioli looks to books like “Diet for a New America,’’ by John Robbins. “The lentil loaf and miso mushroom sauce is a holiday favorite when beef Wellington does not match up,’’ Sciscioli says.

How would you describe your cooking style? “I cannot say I have a style except I like to do preparation ahead of time, especially when a lot of vegetables need to be prepared or proteins need to be marinated… I do like to use everything and will put leftover veggies in the next morning’s frittata, or if I have salmon left over, I turn that into salmon cakes.’’

What’s your favorite dish to cook on a weeknight? “One of the easiest dishes to cook on a weeknight is pork tenderloin with roasted vegetables (see recipe, below) and a tossed salad. Toss in baked apples and it can be done in the oven at the same time except for cooking potatoes (which take longer to cook). In summertime, this changes from the oven to the grill.’’

What do you like to cook when family/friends come over?  “For family or when friends come over, the dish I like the most is cioppino — frutti di mare, fish stew, call it what you like. This involves homemade egg noodle fettuccine and assorted seafood with a light marinara sauce. However, this involves last-minute kitchen preparation so a lasagna, both with meat sauce, vegetarian and some gluten-free oven-ready noodles, can be an interesting balancing act. The casserole dishes allow for more socializing.’’

Do you have a favorite recipe resource? “I recently joined The New York Times cooking app because I kept on getting blocked from reading Melissa Clark’s recipes and I am about to toss our recipe box out the window. Otherwise, watching the Create channel on PBS is enjoyable. Lydia (Bastianich), Sara (Moulton), Ming (Tsai), ‘Cook’s Country’ are all there.’’

What’s your favorite place to shop? “We shop at Wegmans and can find most things. I am still looking for a good butcher shop occasionally. If you really want to make beef steak Florentine-style or if doing osso bucco, you will have to hunt for prime cuts.’’

One pork tenderloin (approximately one pound)
Salt and pepper
A sprig or two of fresh rosemary
A couple cloves of garlic, peeled
¼ cup olive oil
¼ cup balsamic vinegar
¼ cup coarse Dijon-style mustard
An assortment of vegetables for roasting (see below)

For the pork tenderloin:

Place pork into a zip-top plastic bag with salt, pepper, rosemary, garlic, olive oil, balsamic vinegar and mustard. Seal the bag and marinate the meat overnight, preferably, but in the morning will do for dinner time. Refrigerate until about one hour before roasting.

When ready to cook: Heat oven to 350F. Remove pork from marinade and place in a roasting pan. Place pan in the center of the middle oven rack. Check for doneness after 35 minutes (50 minutes tops). The internal temperature should be about 160F.

Cut an assortment of vegetables, including potatoes, a little larger than bite-size (you can use all kinds and whatever is in season). When cut, you will want enough to cover either a large Pyrex baking dish or a heavy-duty rimmed sheet pan. Place the veggies in a plastic bag or a covered glass bowl and marinate them with olive oil, balsamic vinegar, garlic and rosemary. Do this in the morning or a couple hours before roasting.

Vegetables can be cooked in the same oven as the pork, but potatoes take longer to cook. When pork has reached desired degree of doneness, remove it from oven and cover with foil. Continue to roast the vegetables until done.

Serve with a tossed salad, if desired.

Exact quantities are not required for this recipe. It’s not a pastry, after all!

Skinless chicken thighs can be substituted for pork in this recipe.

Nominate a 55+ home cook for this feature! Email details, including contact information, to Margaret McCormick at mmccormickcny@gmail.com.