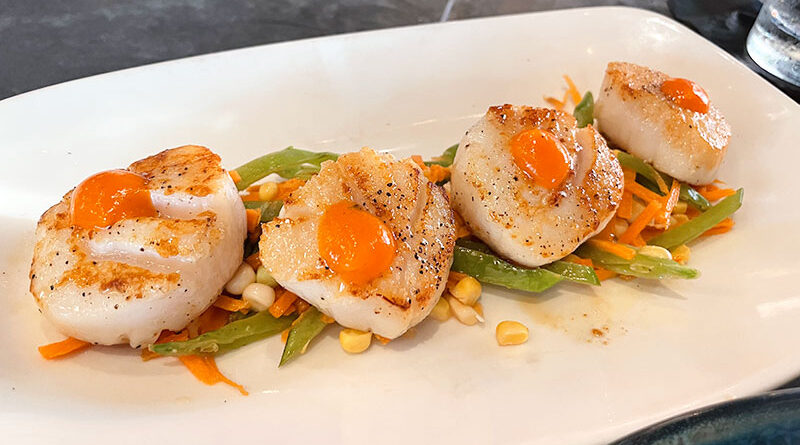 You would hope that one of the longest restaurant names I’ve ever encountered — and I’m looking at you, The Craftsman Wood Grille and Tap House — would keep mouths as filled as saying its name.

I’ve been meaning to check out this spot since it opened a couple years ago, a revamp and revision of what was previously The Limestone Grille.

The restaurant, appropriately located at The Craftsman Inn & Suites, 7300 E. Genesee St. in Fayetteville, is a chic and comfortable spot.

Judging by the interior and exterior aesthetics, the eatery lives up to its name, especially with emphasis on the “craft” and “wood” parts. Of course, “tap” gets a nod with consideration for the 19 draught lines.

Plus, the establishment means business if they have a stake at Maker’s Mark, considering The Craftsman’s own collection of private select bottles making a quiet yet distinct statement.

Each single of the specialty bourbon is $16. I wasn’t feeling that frisky; however, I did order a lager from Syracuse brewery Talking Cursive. The $10 beer seemed a little high for a lager. Most of the other drafts were $6 or $7. Yet, the smoothness and nuttiness of this Vienna lager (per Craftsman’s menu) or sunflower seed lager (per Talking Cursive’s site) won me over.

The other bourbon ordered, a Bulleit rye (for dessert), also came to $10, so you see where the pricing is coming from.

The menu is compact enough where I’d want to try it all, order every item with no regrets.

Speaking of no regrets, try the crispy cauliflower ($16). These tempura-battered florets are bathed in General Tso’s sauce and graced with scallions and peanuts. The tempura batter allows for a great crunch. The last few times I’ve enjoyed the General Tso’s chicken, there was no kick. However, for this small plate, the sauce had spiciness and a slight sweetness. If Craftsman were selling this sauce, they’d have to put a jar aside for me every couple of weeks.

The cavatelli ($18) was as colorful as it was flavorful. The perfectly cooked pasta shared a dish with squash, zucchini, oven-dried tomatoes and spinach. The squash and zucchini were thin sliced so they didn’t have that slight crisp to them and teetered on the mushy side. However, combining them with bites of the tomatoes and spinach — all felt right with the dish. The lemon-thyme butter sauce was on-point. The balance of the seasoning and the citrus was cooperative, as if each was trying to selflessly push the other in the spotlight.

The four, large diver sea scallops ($35) were presented on a bed of slaw, featuring corn, snow peas and carrots. The slaw was basic and fresh. The seared scallops stole the limelight with their flavor and tenderness. Not one of them were tough in the slightest. Although the price made me scratch my head, the quality of the entrée exceeded expectations. It did come with a slide, however.

For that side, cue the roasted yellow and red beets (regularly $6), which came with nuts. To quote the band Coldplay — the beets, they were all yellow. However, this didn’t make me red with anger. They weren’t tough and didn’t taste overly earthy.

The Berkshire rib pork chop ($26) was a generous hunk of pig and topped with frizzled onions. It was charred and cooked a perfect medium, as I ordered. Unfortunately, it was pretty salty. The entree came with a red pepper sauce and a grilled portion of a garlic bulb. Cut off a piece of tender pork, pull out a little piece of garlic, stick them both on a fork to dunk them in the sauce — nothing short of delightful.

The side to the pork was the zucchini fries with chipotle aioli (regularly $8). The large portion of lightly breaded, thick-stripped zucchini wasn’t overly heavy — of course, it wasn’t consumed in one sitting. The chipotle aioli had that slight smokiness and mild heat, a great complement to the breaded veggies.

It was a busy night but as the crowd died down and the leftovers were boxed up, the service kind of forgot about me. The water glass, which was filled a handful of times during dinner, sat empty for the last quarter of the meal, which is a no-no. My check was still in limbo, so I had to ask for it.

Before tip, the bill came to $126 and change. If you’re a person looking for huge portion size, this isn’t for you. If you’re looking for quality ingredients and a meal to enjoy with friends or family, head on in.

Build a night around your meal. Yes, I went there.