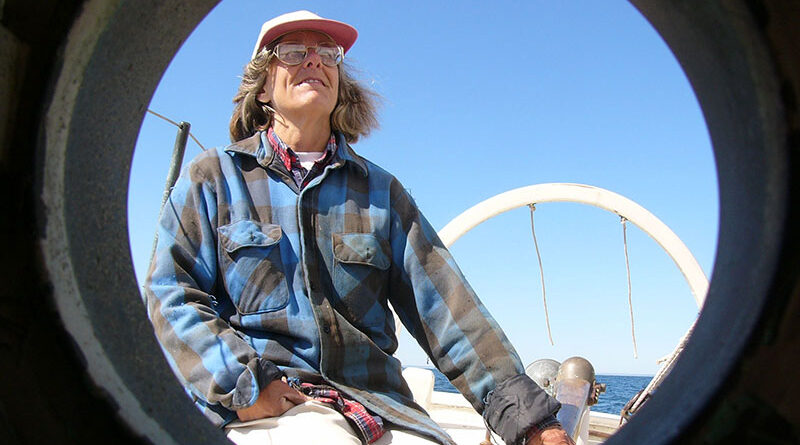 “I grew up on the west side of Wayne County on a 50-acre hobby farm. In this weedy environment with a small creek, a pond and an overgrown abandoned orchard, I acquired my life-long interest in nature study that continues to this day,” she said.

In 1996, she married Chris Gateley, who works as a software engineer with his small family-owned company based in San Diego. They lived in North Wolcott until 2017 when they moved to Fair Haven.

Her formal education included four years at a small Midwestern liberal arts school, Grinnell College, and two more years getting a master’s in fisheries in Massachusetts.

After a few years of environmental work in Baltimore and Rochester, she ended up in the classroom, teaching high school science back in Upstate New York.

“My foray into teaching coincided with the beginnings of freelance writing for magazine and newspaper publication. And as the digital age transformed print media, I shifted much of my energy into publishing short-run books,” she said. “My chosen niche for writing nonfiction was Lake Ontario, as well as nature in general. For reasons unknown, I found a scarcity of recent literature on Lake Ontario and saw this as an opportunity. A passion for sailing had led me to these wide waters and as I explored both American and Canadian shorelines with my 23-foot sloop Ariel, I found much history ecology and human interest to write about.”

Gateley launched into a mildly profitable short-run publishing in 1995 with “Ariel’s World, An Exploration of Lake Ontario,” a 172-page account of history and changing ecology of our Great Lake as seen while sailing solo aboard an elderly wooden boat. It sold well and was followed by a half dozen more works on maritime history, lake-related folklore and, most recently, an update on the lake’s most acute environmental challenges and how we can remediate many of them. That work, “Saving The Beautiful Lake,” also sparked a one-hour video, “Quest For Hope,” now available for download at susanpgateley.com.

“My magazine stories and various book projects were indeed largely done during the off season,” she explained.

“I have also authored three books for Arcadia Publishing. The most recent — “A Natural History of Lake Ontario” — will be released this summer. The motive for most of these words on water was that of increasing awareness of and appreciation for the lake,” she said. “To that end, I also established a seasonal sailing instruction – day trips business in 1997. What better way for people to appreciate the lake than to interact with it aboard a sailing yacht, I figured.”

Most of the time, this theory worked pretty well. Once or twice an open lake charter or sailing lesson had to be terminated for seasickness or rough water. And once, a fast-moving squall soaked the captain and passengers alike as they motored into the harbor.

“But I never lost anyone overboard,” she quipped. “And, a significant number of people came back as repeat customers. Many who sailed with me had never been on a sailboat or on the waters of Lake Ontario. People from out of town almost always expressed amazement at the oceanic expanses of the lake. More than one asked, ‘Does it have a tide?’ And many took memories home of the lake’s wide skies with iridescent clouds, brilliant sunsets and spectacular inland displays of thunderheads and towering cumulus along the lake-land breeze convergence.”

Except for one year, she always operated the sailing business out of Fair Haven Bay. She used the same 32-foot Chris Craft Cherokee sloop during the approximately 17 years that she did charters and lessons.

Some of her charter clients came back for sailing lessons and subsequently bought boats of their own, “which was a great satisfaction to me,” she added.

“I think one’s impressions of the lake are focused and sharpened when experienced from the deck of a sailboat. On a good day, everything seems more intense. Whether it’s a brisk strong wind or one of those last late-fall days of golden light and warm gentle sun and breezes, sailing is sensual. It’s done in an environment of light and water that is often a place of profound beauty and unexpected optics,” she said.

Father Time caught up with the charter captain and her spouse, she admitted. Now, both the ‘big’ boats she used for charters have been sold. She still sails as a “civilian” aboard a 23-footer with her husband.

And she is still writing about the lake.

Some of those efforts are posted at her Lake Ontario Log, linked to: susanpgateley.com.

“I’m working with an extremely talented photographer on a book of collected Lake Ontario images and I have another Arcadia Press book due out later this summer. I also have several earlier books for sale on my website and on Amazon.com, including a historic novel “Widowmaker,” and Saving The Beautiful Lake — a recent environmental history of Lake Ontario,” she said.

“Twinkletoes and the Riddle of the Lake,” “Ariadne’s Death” and “Passages On Inland Waters” are still in print. Rivers End Bookstore in Oswego sells copies or visit her website, where you’ll find links to purchase them on Etsy and Amazon.