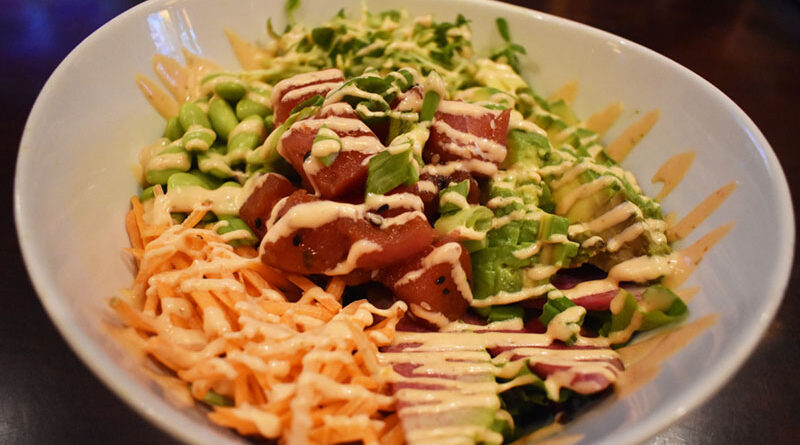 Eating my way around the Finger Lakes village

The gateway to the Finger Lakes — geographically shown, regionally designated and my personal feelings about Skaneateles, New York.

There’s always something to do, shops to browse, and food to enjoy. Going off the Eastwood neighborhood article a few editions ago, because it was a hit, I took to the streets of Skaneateles — well, Jordan and West Genesee streets — to enjoy some Central New York flavor. Keep in mind that I didn’t get to enjoy all the restaurants in the village. There’s only so much time and so much I can eat. For example: Rosalie’s, The Krebs, and The Sherwood are not on this list but reviews of the restaurants can be read on the website. I made the difficult decision to pause on Moro’s Kitchen because I didn’t want to rush and was already dizzy from food consumed.

Needless to say, there are a lot of eateries in walking distance. I just didn’t burn enough calories in between.

When you dine by the water in a restaurant with water in its name, how could a fish dish be avoided? Cue the poke bowl for $16. It’s the healthiest option on this list with poke tuna, rice, greens, watermelon radish, cucumber, avocado and other veggies. There’s also a drizzle of spicy ranch but who’s counting calories anyways?

The bowl of nature’s delights and vibrant tuna is a hearty option. 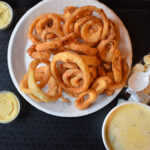 The fish fry has some of the most notable seafood in the region, and their fries are some of the best. What about their seafood chowder and onion rings? Since I love the fries so much, I don’t remember the last time the onion rings entered my belly. The lightly coated and fried onion was very good, leaving me torn between the two standard sides. A whole plate of rings ($3.25) were served up to me, and I had to resist eating all of them.

The honey curry dipping sauce for the onion rings — wow. Move over, Tully’s, Doug’s sauce is better. The amount of fried onions to sauce was a bit uneven, so I had to be more conservative with dipping.

The bowl of seafood chowder ($4.11) had high and low points. The bad news: it’s more of a soup than a hearty chowder. The good news: the flavor makes up for it. The homemade broth is not overly fishy because the taste of carrot and celery take the stage. Plus, it’s not too salty. 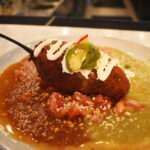 For some reason, the chili relleno ($15) really called out to me as did The Frida cocktail ($10) This was the only restaurant I got a cocktail at, too. The cocktail was a delight and not overly tart when considering the grapefruit, lime, cherry and hibiscus. The smokiness of the mezcal makes itself known. It’s definitely a nice sipping drink.

The chili relleno, a grilled-to-a-crisp poblano pepper, is filled with hot (temperature) cheese and sits in spicy red and green sauces. Poblanos, on any day, usually have tougher skin than bell or jalepeño peppers, so it took a slight “oomph” to stab into it. When cutting in, the fondu-like cheese oozed out like lava. The sauce had a nice kick but it wasn’t mouth-numbing. 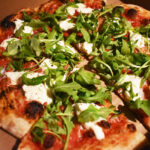 When it opened a handful of years back, Gilda’s caught my eye because of tapas and wood fired pizza. Five years later, how has the oven seasoned? Like George Clooney — very well. The burrata pizza ($16) has tomatoes and the eponymous cheese, plus arugula added after the pizza comes out the oven. The peppery flavor of the greens with the rest of the ingredients stands out but doesn’t overpower. The crust is crisp and strong enough to hold the ingredients well. The singed parts of the crust add a nice smokiness. Overall, it’s a strong artisan pizza. 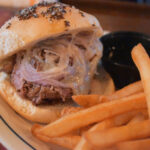 First there was Clark’s roast beef sandwich in Syracuse. Then came LakeHouse Pub in Skaneateles with competition. Their roast beef sandwich with onions and cheese ($9.75) on kimmelweck is dynamic. There’s something about those crunchy caraway seeds and salt that truly eliminates the blandness of rolls. The flavor of the beef has remained consistent through the years but the size seemed smaller than remembered. Aside from that, the sammy did not whammy.

The sides of horseradish and au jus are included. The River Rat horseradish will clear sinuses and then some. It’s as refreshing as it is pungent. I also added on standard, crispy fries for ($2.50). Move over ketchup. Hello, more horseradish. 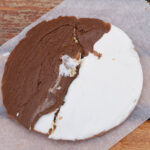 A great place to get some carbs is the little bakeshop behind The Sherwood Inn. Its stretch bread is a dignified rival to Syracuse’s Pastabilities’ loaf. However, its sweet treats are something of note. They have cookies the size of your head. To reemphasize: They have cookies larger than your children’s and grandchildren’s heads.

This includes their chocolate chip ($2) and half-moon ($2.50) cookies. The former is a crispy, dunkable classic cookie which pairs well with a glass of milk, coffee or hot chocolate if the sweet tooth is raging with excitement. The half-moon is one of the best. Patisserie’s version boasts a cakey body and light, in-house frosting. The result is miles ahead of competition. 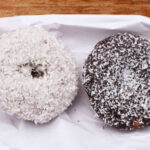 The bakery’s coconut doughnut is one of my favorites. The light glaze keeps the coconut flecks on its lightly fried exterior. Now, which shows I haven’t gotten treats from there in a while, they offer chocolate and coconut doughnut.

The doughy treats have been made consistently, and they only cost $1 each. The light, airy, cakey inside has a confident and delicate, crispy crust. It’s satisfaction with every bite. The combination of chocolate and coconut, however, is a step up from the norm.