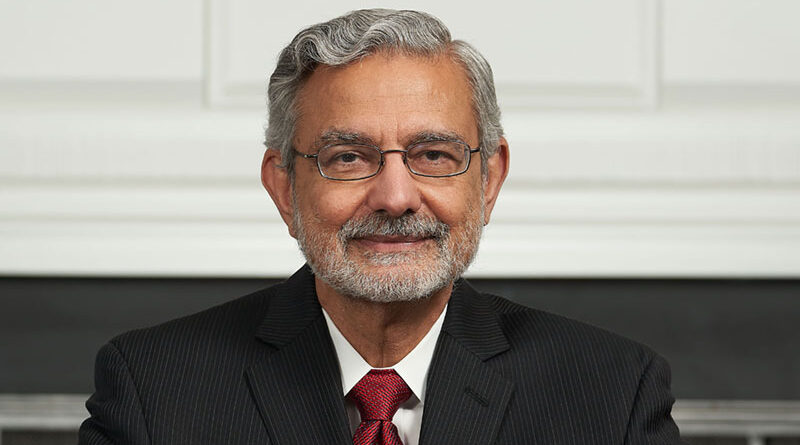 “I think the main advantage is I know so many people and have served with them on every level,” said Dewan, who began his training at SUNY Upstate in 1975.

“I trained here for four years and many of the senior people I work with now were actually residents with me in the trenches,” he said.

He said those kinds of relationships are invaluable, and he could not imagine walking into an 11,000-person organization and beginning to build relationships.

“You absolutely cannot replace a 45-year relationship, no matter how hard you try. Instead of asking, ‘Can I talk with you?’ it is more like, ‘Hey, I need a favor.’ It’s a really different relationship.”

Dewan’s background in psychiatry allowed him to develop the essential skills valued by all leaders.

He managed an inpatient psychiatric unit for many years, and experienced challenges posed by seriously ill patients.

“What you learn is not to get rattled easily and not to react because something in front of you is difficult,” he said. “Despite someone who may be out of control and saying hostile things that are hurtful, it’s important not to react and still treat them respectfully.”

While that certainly can be difficult, health care professionals must understand the patient who is under stress of his or her own kind.

“That’s what we need to do with our organization,” he said. “When I took over, the organization was under tremendous stress.”

The appointment of Dewan came during a time of controversy at Upstate.

“The idea was to take the positive and not react to some of the negative stuff people were saying,” Dewan added.

“We have wonderful people and are nurturing them, supporting them and watching them flourish. To me, that’s been the most gratifying part of the last three years,” he noted.

The 69-year-old Syracuse resident earned his medical degree at Bombay University before coming to the U.S. in 1975 and did his residency at University Hospital, SUNY Health Science Center in Syracuse.

Dewan is a SUNY distinguished service professor and also served as interim dean of Upstate’s medical school. He has also served as director of both undergraduate education and residency training.

A native of Bahrain, India, Dewan came to the U.S. as a young man and said he was delighted to earn a faculty slot in the psychiatric department at SUNY Upstate, an environment that nurtured him.

“However, there was never a time I thought I could get here, partly because of never thinking I could,” he said.

Dewan never applied to be interim dean or president.

“It’s not what a person with my background dreams about,” he said. “I am very happy being a faculty member and still love teaching and writing, but the positions of dean and president are nothing that I thought were possible or something to aspire to.”

“It is absolutely gratifying and humbling,” Dewan said. “I keep saying it is a real privilege to be able to do this and be tapped to do this.

“I often say how I have had more jobs that I have not applied for than I have applied for.”

He said 2020 was a difficult year, but it also was perhaps the most gratifying for many health care professionals at SUNY Upstate.

Dewan said the organization has “amazing” people who are being duly recognized for the remarkable work they have done in the face of COVID-19.

“We are committed to serving the community in an even better way because we know we can and there’s a need. We are up to the challenge,” he said.

He said in 2021, expect more expertise and programs at SUNY Upstate as well as increased capability to treat additional patients.

“Our chief executive officer, Robert J. Corona, and our four deans for example are all really terrific. We have all the ingredients: superb leadership and incredibly good people that work here. Now that we are aligned, I am very excited about tomorrow,” he added.

Corona said Dewan leads by example with the highest integrity.

“He is decisive, strategic, very intelligent and has a gift of being able to deliver tough messages with kindness and compassion,” he said. “He is a true champion of those who have the greatest need. He empowers his people and allows them to thrive while doing their jobs, and is the furthest person from a micromanager.”

“I always believed that when you think of any organization, you first need to select a group of very good leaders,” Dewan said. “You hire the best people, not just for leadership, but at every level. But then, you turn it over to them. They are the experts, and no matter how smart or arrogant you are, you can never know what the person on the ground knows.”

He said he strives to hire the best people and trust them, with his job being to support them.

“We all know what the work is: We need to provide the best care for our patients, educate students as well as we can, and we need to do the best research,” Dewan said.

“We know what the target is. I often tease and say, ‘My job is to hire the best people and support them, and then get out of their way and worry about how we are going to get better parking,’” he added.

During Dewan’s stint as interim president, the university expanded several services, including urology, neurology and mental health for children.

“SUNY Upstate is often seen as just another hospital or sometimes another big hospital,” Dewans said. “But the way we look at it is twofold. First, it is a regional medical center and we serve a very large population. Secondly, it’s the only public academic medical center in the region, and our primary motivation for doing anything is to serve the public.”

Dewan said his team views the growth in that same spirit.

“What we want to do is provide a level of care that is better than the patient can receive anywhere else. That’s the academic difference. We have more specialists, expertise, machines and technology, because that is what is required to be a good educational enterprise,” he said.

He said it is essential to teach the next generation with the best of all resources.

“That is just of the one thing that drives us. We don’t just want to have more, we want to have better,” he added.

It’s the first child psychiatric unit in a general hospital in the region. There are several in state psychiatric centers.

“There is a very good one at Hutchings [Psychiatric Center in Syracuse], but this is the first time we’ve had one,” he said. “It’s something the community has been asking for.”

However, even if a highly ranked insurance provider such as BlueCross BlueShield covers a child, he or she would not be admitted to Hutchings because it does not accept that form of insurance, Dewan said.

A child would then be directed to health care facilities out of the region, such as in Saratoga Springs.

“We want to be available for anybody who needs anything at any time and provide the highest level of care,” he said.

“It’s not just about getting together tenured surgeons. Each one is a general neurosurgeon,” he said. “They can do everything. Each one also has a specialty and can do things even others in the group can’t. When you put them all together, it’s very heartening.

“If you need care when you walk in, there is someone who has the expertise to take care of you no matter what. We are the only hospital in the region where you can walk in and receive excellent treatment for literally anything you want.”

It is a comprehensive level of care and academically based, which generates trust among patients and ensures them they don’t have to go elsewhere for treatment, Dewan said.

Although other hospitals in the region provide sufficient basic care, they transfer patients to Upstate on a regular basis when availability allows.

SUNY Upstate gets referrals from the Greater Syracuse area plus a region that encompasses 17 counties and even beyond for certain treatments.

In terms of a support system, Dewan enjoys the support of his wife along with their two adult children.

Due to his hectic work pace, he has been unable to focus not only on his family, but himself.

“Recently, I haven’t done a lot of sensible stuff in terms of caring for myself,” said Dewan, noting he takes advantage of the times he can get outside at home to come up for much needed air. “I’ve temporarily given up on the things that I really enjoy.”

That includes participation in a tennis league, a source of both exercise and camaraderie.

He and his wife Anita have two children, son Amant and daughter Radhika Fliegel. They enjoy traveling as well as their three grandchildren.

“A little time with them rejuvenates me for a very long time,” he said.

The Syracuse resident earned his medical degree at Bombay University before coming to the U.S. in 1975 and did his residency at University Hospital.

He is a member of the American Psychological Association and Organization of Advancement and Integration in Medical Sciences.