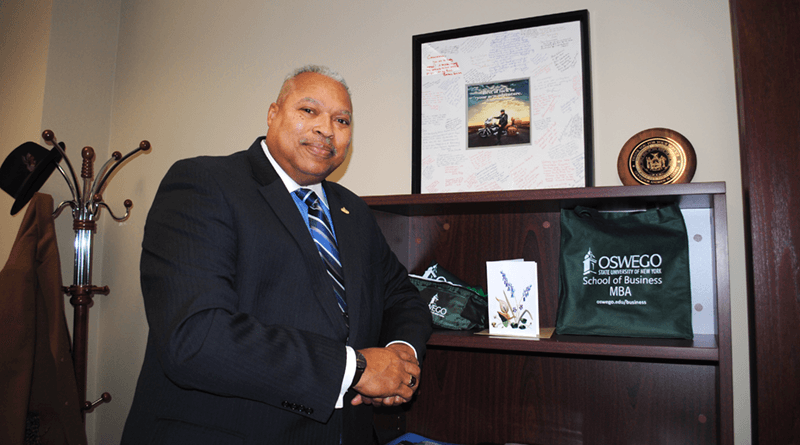 At 63, a former member of the Onondaga County Legislature and New York State Assembly, takes on a new challenge

Sam Roberts has been in politics and public service since the 1970s. For decades, he worked at General Motors and held various positions in the United Auto Workers union there.

He has been a member of the Onondaga County Legislature and New York State Assembly, and he has held other state positions for years.

He was honored recently with the Pioneer Public Servant award, citing his achievements with the UAW, as a member of the legislature and assembly, and as commissioner of the New York State Office of Temporary and Disability Assistance.

The award is given by Helping to Empower Incarcerated Young People, a project of the Concerned Citizens Action Program.

“When you look at the pioneers, I’ve kind of been out there in front of a few things over the years.  I’m honored to do that, but I’m just standing on the shoulders of the people who came before me,” he said.

He said despite being the second African-American elected to the legislature and the first person of color from this area to serve in the assembly, he has never promoted himself as an African-American candidate.

Despite the awards, the accolades and his years of work in the public sector, the 63-year-old isn’t sure he’s made his biggest accomplishment yet.

“I don’t know if I’ve reached my biggest accomplishment yet. The thing is, it’s still a work in progress for me,” he said.

Roberts sat down for an interview recently as he started a new chapter in his life as SUNY Oswego’s special adviser to President Deborah Stanley for neighborhood and organizational collaborations in the Syracuse and Central New York regions.

As such, he will help to enhance relationships and develop initiatives with local neighborhoods, organizations, government entities and other SUNY institutions in the CNY area.

Roberts took this job with SUNY Oswego in order to remain closer to his family and his hometown of Syracuse. For years, his work has had him traveling to and from Massena and Albany.

“SUNY Oswego was an opportunity to come back home. I’ve been living out of my suitcase since my daughter was 3 years old, and now she’s 21. I was blessed to be afforded this opportunity,” said Roberts, a father of seven ranging in age from 21 to 45.

Prior to taking this position, he had served as the commissioner of the OTDA(New York State Office of Temporary and Disability Assistance), calling it one of his most fulfilling jobs.

“We dealt with homelessness, refugee services, and temporary aid to needy families. And again, when I go and break ground for a homeless shelter or supportive housing complex knowing the problems that we have, not only in Syracuse and New York state but across the country with homelessness, it’s something,” he noted.

In his office at SUNY Oswego’s Metro Campus in Syracuse is a framed collage that sits on his windowsill from the Homeless Housing and Assistance Corp., a program administered by the OTDA in recognition of Roberts’ work as commissioner.

Also from his OTDA staff is a photo of a gentleman on a motorcycle against a setting sun, with well wishes as he begins his new job at SUNY Oswego. It is appropriate since Roberts owns an Indian Motorcycle.

While he’s proud of his work at the OTDA and as he moves forward with his job at SUNY Oswego, he said there are so many things in society that are, as he put it, “unfinished.”

“Borrowing a quote from Gov. Andrew Cuomo, and one that’s been used by others as well, ‘it’s better to give them a hand up then a hand-out,’” Roberts said.

The best way to help somebody out of poverty, he said, is through jobs and education, making sure that everyone has a fair shot at those jobs and encouraging children to stay in school and get the possible education they can.

“You have to make sure everyone’s at the table.  When you talk about discrimination, it’s not just racial discrimination. It’s also about dollars and cents. There are poor whites, poor blacks, poor everybody,” he said. “I won’t feel good until I see that everybody’s eating at that table.”

While working in Massena for General Motors, he attended classes at SUNY Canton and SUNY Potsdam and ultimately earned a bachelor’s degree in business, management and economics from SUNY Empire College.

His long career in public service can well be attributed to his strong rapport with people and his upbringing.

“I just love people. It comes from family. I was blessed to have my mother and father under the same roof. I have a lot of friends that didn’t have that,” he noted. His father and mother, Andrew and Annis Roberts, raised him and his four older siblings on Syracuse’s east side.

He credited his parents, too, for igniting in him an interest in politics and the labor movement.

They took Roberts as a youngster to the polls with them when they voted, and his mother would later become an elections inspector.

They were also strong labor union people, he said.  His mother worked at General Electric for 38 years and was in the International Union of Electrical Workers, and his father was a sheet metal worker at Carrier.

Shortly after, he started working at GM and served as chairman on several committees and members on others.

As a teen in Syracuse, he became acquainted with Frank Jones, who at the time was involved in the Democratic Party in the 19th ward. The ward includes parts of the south side and the Comstock and Meadowbrook neighborhoods.

Roberts ended up doing some campaign work for Jones, who had him do some poll watching.

“That was where I cut my teeth,” Roberts said.

At Jones’ suggestions, Roberts introduced himself to Nancy McCarty, who was a major player in the local Democratic Party and especially the 17th Ward, a stronghold for the party and Roberts’ home neighborhood.

He would impress McCarty right from the start, and he would go on to become a block captain, a member of the 17th ward committee, and secretary for the ward.

Along the way, he worked with some heavyweights in the local Democratic Party at that time, including Nancy Larraine Hoffmann, Rosemary Pooler, Lee Alexander and Tom Young, learning a lot and making a name for himself in the party.

By now, it was the late 1980s, and Hoffmann was vacating her seat on the Syracuse City Council to move to the state Senate.

Roberts had expressed an interest in running for the seat, but it wasn’t in the cards; the Democratic Party Committee went with another candidate. So he waited.

“The next thing that came up was the county legislature, which was a few years later, but I was just stronger and better,” he said. He won the seat and would go on to serve five two-years terms, all through the 1990s.

He was still working at the local GM plant as a tool and die maker, but when that closed, he transferred to Massena and worked at the GM Powertrain plant there.

He retired from GM, and in 2007, he went to serve at the state’s Office of General Services as the superintendent of the Sen. Hughes State Office Building in Syracuse.

In 2010, he ran and won a seat in the state Assembly, representing what is now the 128th District. In 2015, when he was entering his third term, Cuomo tapped him for the job as commissioner for the OTDA.

Words to live by

Roberts has been involved in martial arts since he was a teen.

When the Westcott Youth Organization opened up in his neighborhood, he came up through the program and became a volunteer. He taught martial arts there, because as he said, “I know what it did for me.”

Eventually, he became a director of the organization. Today, he holds an eighth degree black belt in American Shotokan Karate.

He alluded to situations in his life in which because of the mindset he had learned through martial arts, he could walk away. “I didn’t have to prove anything to anybody,” he said.

He also credited martial arts and his instructor with his ability to deal with challenges that have arisen.

“He always said when you come to these stumbling blocks, you can try to push it out of the way, you can climb over it, you can walk around it, and sometimes you can dig underneath it. But don’t let that stumbling block stop you from getting to the other side and doing what you have to do. So that’s the way, just find some way to work around it,” Roberts said.

Another of his teachers offered Roberts some wisdom that has stuck with him.

One of his professors at OCC, Jim Dupree, used to tell him that if he could make a difference in the lives of one of his students, he would consider that his biggest accomplishment.

Years later, Roberts ran into Dupree, who told him, “I think you’re that one student.”