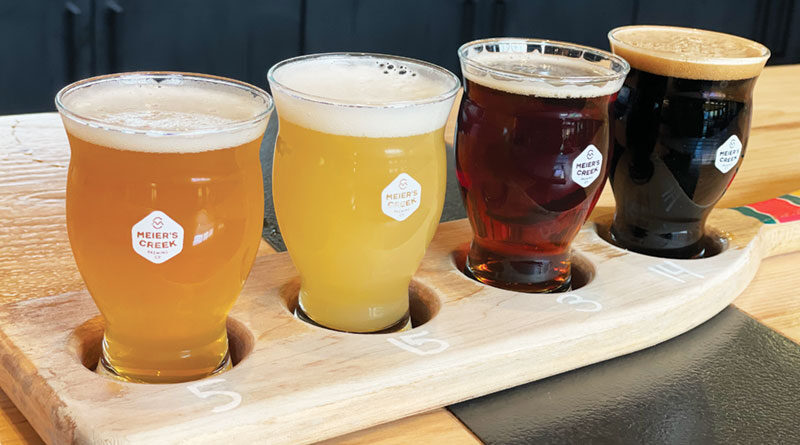 The huge facility is perfect for a brewery who can handle it properly: an expansive outdoor area complete with patio seating and land to explore.

During the meal, I enjoyed a flight ($14 for four 5 oz. beers) because sometimes it’s hard to decide.

The Smile Back (American pale ale) and Later Bozo (New England IPA), which boasts a label with a guy on a jet pack — if that says anything — were my favorites out of the four. The Sap Sucker, a maple porter, made me happy because the maple was not at the forefront. Strong maple is off-putting (for me).

I also enjoyed a pour of the Character ($6.50/pint), a nitro cream ale and collaboration with local beer bar A.W. Wander, which was very enjoyable. Cream ales aren’t on my radar, but I’d order this vibrant, low ABV beverage again.

Corn and crab hushpuppies ($14), which proved to be a shareable option, are presented with a side of green goddess dressing. Why go with ranch? It’s too typical. I’d be curious if Meier’s throws some anchovy in the dressing – but does it matter? The flavorful white, seasoned dressing pairs very well with the hearty fritters of crab — and, yes, the crustacean is noticeable — pieces of corn, and cornmeal.

The fried buttermilk chicken sandwich ($17) proved itself to be one of the largest fried chicken sandwiches I’ve ever had. It’s almost necessary to squeeze the sides of the roll as you move in for a bite. The sound and feel of the cracking is satisfying. With that said, there’s a significant crunch with each bite and it’s not overly breaded or greasy. It’s topped with pickle and garlic aioli. A heaping pile of crispy, lightly seasoned fries comes with it.

And what about their pizza? Meier’s Creek offers four Neopolitan-style options. The garlic and arugula of the Italian blanco ($16) are definite attention grabbers. And broccoli rabe. Get your greens and your carbs with this guilt-free pizza. The crust wasn’t very crispy, which is fine. But the fresh ingredients, especially the ricotta — cheese takes precedence — really helps

At this moment, let’s switch gears. The one big qualm I had against my visit to Meier’s Creek is the bar service. It was a very long dinner out. To put things into perspective, I (by myself) sat down at 4:15 p.m. and left a few minutes before 7 p.m. For essentially a four-course meal, it’s a lot of time.

I can quote Tom Petty to emphasize the waiting was the hardest part. Readers may say (and I can hear people scowling): it’s just the times and restaurants are struggling. This is valid. However, there were three people behind the bar at one point (and one bar back). I had to grab to wave for service, no one checked up on how the meal was, and the staff had no problem interacting with each other. Kudos to team camaraderie but there were others next to me who were questioning the lack of attention as well.

I was hesitant to order dessert due to the waits but did so considering they were out of shrimp and grits. Ordering only three items wouldn’t do the review justice, and the sticky toffee pudding ($10) squeaked in at the last second.

This Medjool date sponge cake was worth the extra time. Toffee drizzle topped the thick, albeit light, cake and vanilla ice cream. It’s a personal-sized dessert but it’s shareable if you’re feeling generous.

Would I go back again? Absolutely. It’s a great spot. Being new and surviving the pandemic shows the integrity. And, in my opinion, it’s a wonderful brewery in Central New York. I’ve enjoyed Meier’s beer before visiting. When compared to the former dweller, Meier’s Creek took what was handed to them, ran with it all and upped the ante.