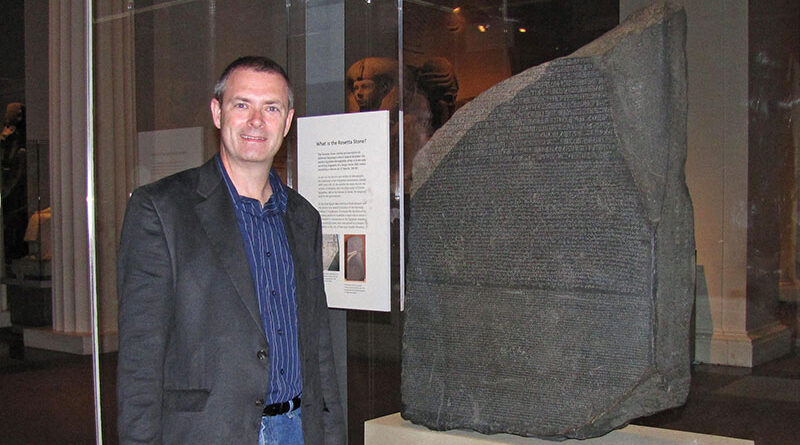 The work of historical fiction is part past, part present, part mystery and all adventure

Jay LaBarge is a world traveler who knows how to keep the adventure going long after a trip. Mayan ruins in Mexico, a pre-Columbian  walled city, Pueblo cliff dwellings in the U.S. Southwest — all were visits that were just the beginning for “Aztec Odyssey,” LaBarge’s ambitious work of historical fiction, part past, part present, part mystery and all adventure.

The recently-published book shifts from the richly-imagined struggles of the 16th century Aztecs to those of a 20th century guy from Michigan.

The Camillus resident aspired to become a writer only recently. Newly retired in 2019, he found he had the time to re-evaluate, to follow his passions and to reflect on what he wanted his legacy to be. He and his wife, Sandy, have two grown daughters and a grandchild.  And then there was all that travel, a lifelong passion which he and Sandy share.

“I like to be somewhere I’ve never been, dig into the local culture, eat the local foods … stay in out-of-the-way places,” the 60-year-old said.

It was just such trips, particularly to Chichen Itza, ancient Mayan ruins on the Yucatan Peninsula dominated by a magnificent stepped pyramid, and Tulum, the well-preserved pre-Columbian walled city on the Mexican Gulf coast, that converged in his imagination and led to the “Aztec Odyssey.”

The book is set in two worlds and three parts.  Part I follows the 16th-century journey of Aztec ruler Montezuma’s third son, Asupacaci, and his Aztec warriors after the Spaniards’ conquest. Parts II and III take place in the present, with a would-be archeologist named Nick LaBounty, who puts his skills to good use when he begins his own journey to recover a lost family relic and shed light on the mysterious circumstances of his father’s death.

LaBarge creates rich characterizations and vivid details, an especially remarkable accomplishment in Part I, with a character as distant in time and place as Montezuma’s son Asupacaci. No historical evidence of Asupacaci’s fate exists, so LaBarge was able to create a fictional journey for the Aztec warrior, getting inside the warrior’s mind and inside his culture with meticulous details down to Aztec tools, weapons, customs and daily life.  The book is peppered with words from four languages — English, Spanish (for the Conquistadors), Nahuatl (for the Aztecs) and Navajo (for modern-day Nick LaBounty’s love interest).

How did LaBarge research a project of this magnitude, which links enigmas from an ancient culture to present-day life?

“The traveling gives me the sense of authenticity,” he said. “But, I didn’t have to go anywhere. Once you have the plot, it’s easy to find information these days. All you need is a keyboard and an internet connection.”

It helps that LaBarge has a wide range of academic interests, above and beyond his past professional career in technology-oriented companies.

“If I had not been in technology, I probably would have been a professor,” he said. “I loved all the ‘ologies!’”

Then there is his passion for history, which dates back to boyhood.

LaBarge started the book in 2019 and worked on it “in fits and starts” until it was released in December 2020. Along the way, he learned a great deal about gathering the creative support he needed. He found that having an editor, for instance, was invaluable, not only for input on the writing but for marketing fundamentals as well. He also relied on a small group of three or four good friends for critiquing his work in progress.

“As a writer, I find you can become blind to some things. They didn’t pull any punches,” he said.

LaBarge also touts the advantages of self-publishing. “Aztec Odyssey” is self-published and available on Amazon, an arrangement LaBarge is happy with because it gives him autonomy over his writing and his marketing.

Even as the book is marketed on Amazon’s website, for instance, LaBarge can make revisions if he chooses, because Amazon prints copies as they are ordered. “It’s a living edition!” he said. He adds that, for all writers, self-publishing can be done inexpensively and “gets a lot more voices on the market.”

LaBarge has great plans for future projects. The most immediate is seeing “Aztec Odyssey” produced in an audio version through Audible.com. That’s been an interesting process for him, from auditioning voice actors to checking on-line pronunciation programs for his Navajo, Aztec, and Spanish words. As for his next writing project, LaBarge is working on a new Nick LaBounty book, which will feature yet another ancient mystery – the disappearance of the ancient Minoans who once dwelled on and near the island of Santorini off the Aegean coast of Greece. And yes, LaBarge and his wife have traveled the region and soaked in the mystique of the ancient Minoan culture.

And it won’t stop there. With other memorable trips behind him and no doubt other travels on the horizon, LaBarge is keeping his “ologies” handy for an entire Nick LaBounty series!

Photo: For an author who likes quests, Jay LaBarge went on a quest of his own to view the Rosetta Stone, which unlocked an ancient civilization’s secrets in three ancient scripts.