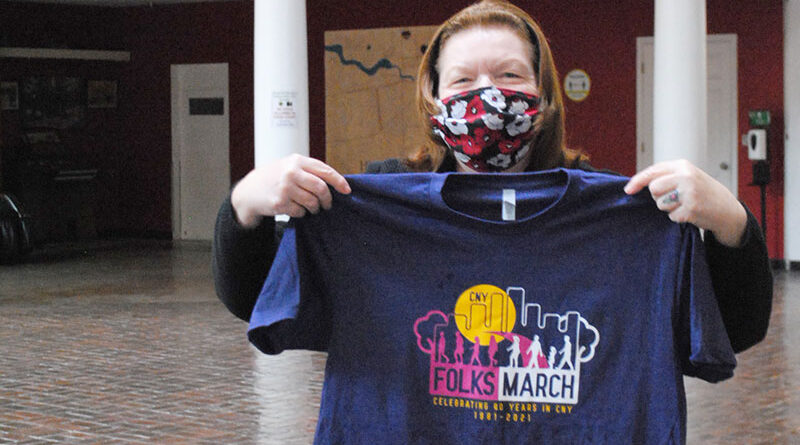 CNY Folksmarch mixes friendship, fitness and an opportunity to discover parks and attractions throughout the area.

The group organizes walks one weekend each month, choosing locations like malls in the winter and area parks and some of the region’s towns when the warmer weather allows. Each walk is approximately three miles and members do them at their own pace and can travel whatever distance they’re comfortable with. To better accommodate diverse schedules, the walks are to 8 to 11 a.m. on Saturdays and 1 to 3 p.m. on Sundays. Folksmarch membership numbers approximately 50 active members, along with a mailing list of 200.

Mary Ledford, 60, the group’s president, said her favorite part of the walks is the chance to visit different areas.

“For me personally, I like to go different places,” she said.  “I like the aspect of going places I’ve never seen before.”

The committee that chooses the locations — and suggestions from members are welcome — looks to include sites in Syracuse and points north, south, east and west of the city, Ledford said. Each one is within an hour’s drive from Syracuse.

Brian and Stacy Noll, 57 and 60 respectively, of Liverpool, share Ledford’s interest in exploring various attractions throughout the area. The couple has been members on and off since the 1980s, with Brian serving as the group’s current treasurer. During a recent walk at Auburn’s Fingerlakes Mall, Brian noted that it’s a great opportunity to come out and walk, see the community and enjoy camaraderie with others. After a walk last year in Auburn, Stacy said that they took advantage of being in the area to visit the nearby Harriett Tubman Museum.

“It’s something to do on these COVID-dreary days. We get time to bond,” Grudzinski said.

For the group’s $40 annual fee, members get a passport, which get stamped at each walk and collector pins, specially designed for each trek.

This year’s schedule includes walks at Reed Webster Park in Camillus in April; Breitbeck Park in Oswego; in May; Stone Quarry Hill Art Park in Cazenovia; Labrador Hollow in Fabius in July; Community Park in Baldwinsville in August; Robert G. Wehle State Park in Henderson in September; Green Lakes in Fayetteville in October and Pratts Falls, Pompey in November.

Folksmarch was created four decades ago and had been under the auspices of the Syracuse YMCA. Its physical education director at the time, Walt Price, and his wife, Peg, had been visiting family in Germany and participated in Volksmarche, a non-competitive walking program, there. The Prices loved the event and decided it would fit well in the Y’s program at the time. Even after Walt retired in 1991, he continued to oversee Folksmarch for the Y until 2016. At that time, the program moved out from under the Y umbrella and was incorporated as CNY Folksmarch Inc. in January of 2017.

Those interested in joining the program can bring a buddy or come solo to an upcoming Folksmarch and walk right in. The specific schedule with dates is on the group’s website – folksmarch.wordpress.com or check out their Facebook page – Facebook.com/Folksmarch.