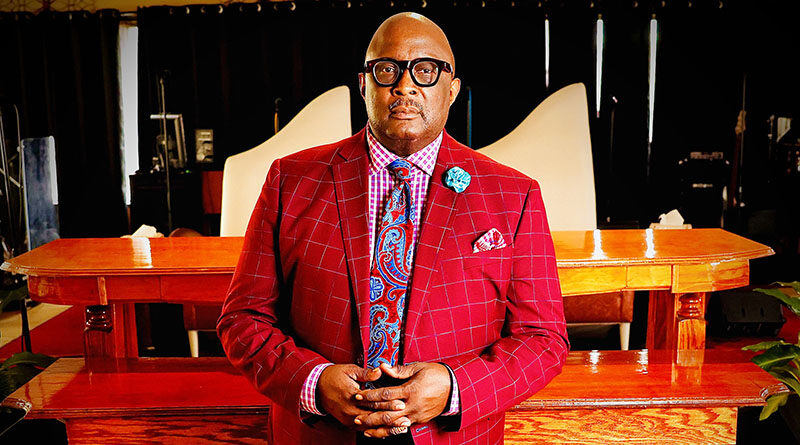 By his own account, you would never believe that the “little boy from the projects” of Syracuse as he calls himself, whose mother completed only high school and whose father did not finish elementary school, would ever turn out to be anyone respectable.

But the Rev. H. Bernard Alex has become not only well-educated but also a communitywide leader, charitable organizer and pillar of the community’s faith. He has done all of those things and still has plenty of plans for his future.

He learned patience and empathy through his brother, Ronald, who suffered oxygen deprivation and subsequent developmental disability from his birth. Alex said that the hospital in Florida denied adequate care to Wilma and Ronald because of their race. Alex also had six sisters, with five still living.

Growing up with a special needs brother “made me sensitive, so now the work I do at the church is advocacy,” Alex said. “I don’t come with a bias. I come with meeting people where they are. How I wanted my brother to be treated is how I treat people who come in for help.”

Alex recalled that he never saw a black teacher at any of his schools. This lack inspired him to want to write educational curriculum “that was culturally and socially sensitive to particularly people of the diaspora,” he said. “Most curriculum at that time was a Eurocentric posture and students who were not didn’t see themselves in the books. There were things stated that were not factual.”

Despite their own lack of education, his parents urged their children to read. Alex flexed his library card often and read and reread the set of encyclopedias the Alex family had at home.

“I was mischievous,” he said. “My mother would say, ‘Go to your room’ and I’d take an encyclopedia, let’s say ‘H’ and I’d read it from beginning to the end. It helps with ‘Jeopardy.’ I say to kids all the time, ‘Reading opened for me a way to see the world.’ I just loved reading those encyclopedias and books because I could go anywhere I wanted to go.”

His lifelong thirst for knowledge has served him well. Although he was accepted at several prestigious universities, he chose Tuskegee University, where at last he sat under the teaching of “teachers who looked like me,” he said. “It made such an impact. I could only imagine if I had someone in a classroom or textbook who looked like me before this.”

He began studying as an English education and language arts major. He eventually shifted to religious studies in graduate school, which he referred to as “part of a Divine plan.” Beginning in 1985, he worked in a few different fields in Syracuse after graduation, including education, minority affairs, and, in 1991, as a pastor. He does not count those interim years between completing his education and becoming a minister as wasted years because of all he learned in working with people, administration and teaching.

Since 2001, he has led Victory Temple Fellowship Church.

During the pandemic, he took virtual classes and seminars from Harvard.

“You only stay vibrant and relevant by stretching yourself academically, socially and relationally,” he said.

In addition to his academic prowess, Alex is a notable musician. He has performed as a vocalist since a young man. While a freshman, he organized the Tuskegee Gospel Ensemble, an unofficial group. During spring break, he and his ensemble members borrowed a school-owned bus to drive to Syracuse for a non-endorsed performance.

“We loved the Lord and were going to sing,” he recalled. “When we got back, President Payton said, ‘Have you lost your minds?’”

Although the nonsanctioned trip got him into hot water, Tuskegee has maintained a gospel group ever since. He has sung in concert halls in venues including Buffalo, Houston and Seattle. More recently, Alex performs with the Syracuse Opera Company and Syracuse Symphony Orchestra.

In addition to his interest in performing art, he serves on the board of the Everson Museum. His community interests include serving as president of the Syracuse National Action Network, involved in diversity, equity and inclusion training and social justice training.

“I draw from life,” he said. “People ask if I think about retirement, but I can’t imagine that. There’s too much going on, too much happening. I feel a responsibility and accountability for all my parents sacrificed for me to have every academic opportunity possible.”

One of the ways in which he serves is through Victory’s community feeding program. Every Wednesday when he’s not in a meeting, he cooks to help the other volunteers and the team feeds anyone who comes from noon to 1 p.m.

“I cook meals with this thought in mind: I will never serve something I would not serve to my own family,” he said.

A typical meal might include rosemary chicken, garlic mashed potatoes, string beans and a dinner roll. He plans the meal sizes so that participants receive enough food to take some home. As the cost of food has risen, he has seen more people attending.

“It breaks my heart to see children when they get their food and they start eating even before they go,” Alex said. “I’ve seen grown men cry because if we weren’t cooking, their family wouldn’t have had food for a few days.”

Grants and donations for his 501(c)(3) organization from donors like KeyBank Foundation, Allen Foundation and the Community Foundation help the church with the project. During the pandemic, a meal participant’s request for laundry detergent sparked a new way to help. Soon, organizations including Crouse Health began dropping off detergent, bleach and fabric softener for the church to distribute. This experience and so many others have taught him that the Central New York community is full of caring people.

“Some of them don’t know what to do or how to connect but when they find out, they do,” Alex said.

As another example, he cited the church’s Fathers Arise, a community festival that almost did not happen in 2021, its inaugural year. The free event includes a bevy of grilled chicken, hot dogs, burgers and ice cream. Mere days before the event, the church freezer died, allowing all the food to spoil.

“I was going to cancel,” Alex recalled. “I was done. ‘OK, God, what kind of joke is this?’ I couldn’t take another setback.”

That morning, Nicole Sommavilla with WSYR Channel 9 News contacted Alex to follow up on a story about the event. He told her about the loss of the food, and she decided to cover what happened. Her story turned into a request for help. That Thursday and Friday, the church parking lot brimmed with donors ready to drop off cases of food—meat, chicken, buns, ice cream and everything he would need for the festival.

“I even got a call from a beef farm in Tully who said we had someone order half cow and didn’t pick it up,” Alex said. “They said, ‘If you can pick it up, you can have it.’ It was grass-fed beef. It was such a testament to the core value elements that I still believe exist in Central New York.”

The event continued in 2022. Alex hopes to continue to draw the community together through food, faith and working together.

In 1986, Alex wed Jahnjae E., who hails from Monrovia, Liberia in West Africa. The couple met in high school through singing together and now have four grown children, Zeruiah, Zaire, Zion and Zecarjah — and one grandchild, Zeruiah’s son, Asahel.

In addition to spending time with his family, Alex enjoys cooking, traveling, and antiquing.