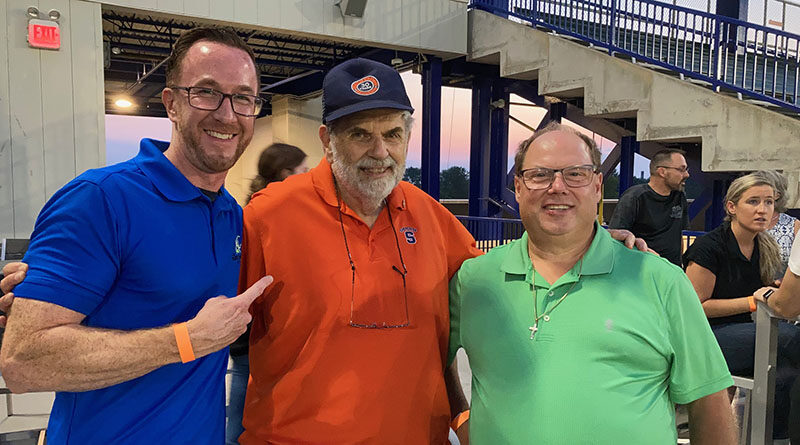 ‘Barter baron’ continues to do what he does best — networking, bartering and community service

“It keeps me young. I’m involved. I’m doing something” he said.

This statement by Bernie Bregman is more of an understatement.

The 90-year-old dynamo has indeed been involved in the Central New York community, and continues to reach out to his expansive network of friends, colleagues and contacts to carry on his work.

The Dewitt resident currently runs his own marketing firm, BBB Marketing, and is the program and membership chairman of the Eastwood Rotary.

Among Bregman’s many other endeavors, he remains involved in various bartering group, his synagogue, Congregation Beth Sholom-Chevra Shas, and his Tip Club.

He’s had had several different careers; he got involved in the practice of bartering and brought it to new heights; he’s impacted the work of numerous organizations of which he’s been a member; and he’s donned costumes in order to attract people’s attention to his various ventures; and he’s even been an advertising model.

In a take-off of an iconic beer ad that features the “most interesting man in the world,” Bregman dressed in a dark suit and a stark white shirt, assumed the posturing of that actor, and posed for ads, among them for Stone’s Steakhouse. And through it all, he’s established a network of contacts that spans the country, if not the globe.

His community involvement keeps him attuned to current events in the area, and his work in bringing in speakers for the Rotary Club meetings, for example, gives him the opportunity to keep up-to-date with the movers and shakers in the community, albeit, one could argue that he, himself, is one of those movers and shakers.

His work has been celebrated by several of the groups to which he belongs.

When his Rotary Club celebrated its 60th anniversary last year, the organization honored Bregman, its oldest member, with the first Bernard B. Bregman Lifetime Service Award, saying that the club “would not be what it is today without Bernie.” The award, the Rotary added, was created “in order for others to strive to achieve so much.” Mostly recently, the club presented him with a jacket and polo shirt in recognition of his previous tenure as president.

What drives Bregman to stay so involved in the community?

It might seem ironic that Bregman, who has become a guru in the sales and marketing field, did not enjoy sales when he was a youth.

He joked that as a boy growing up in East Orange, New Jersey, if he had magazines or something similar to peddle, his mother would sell them for him to their customers at the family-owned grocery store. Watching his father work 12-plus hour days at least six days a week convinced the young Bregman to look to something else as a career.

“I vowed to never go into retail,” he said.

Eventually he went into news reporting, and then sold household cleaning goods and paint door-to-door. He also has turned his interest in bartering into a gainful enterprise, and had had a 30-plus-year career in marketing with the CNY Business Journal before retiring just a few years ago. That doesn’t even begin to include the initiatives he’s taken on, and still takes on, for many are nonprofit organizations.

To say that Bregman becomes immersed in these various groups would be, again, an understatement. He said he has been president of nearly all the associations with which he’s been involved. For example, he is a past president and past member of his synagogue’s executive board and the board of trustees, and just in 2022, he had been a driving force behind the publication of a special supplement to mark the 60th anniversary of the Congregation Beth Sholom-Chevra Shas.

Bregman has always had a penchant for writing since he was a youth, having penned for a weekly newspaper and then becoming editor of his high school newspaper. He attended Syracuse University, where he graduated from its journalism school in the mid-1950s. He would go on to serve as an Army public information officer, based in Fort Bliss, near El Paso, Texas. Returning to Syracuse, he went to work at the Post-Standard and then WHEN-TV, the forerunner to the current WTVH.

Three weeks before his wedding in 1957, he was let go from the television station. Needing a job, he answered a blind ad for someone “able-bodied,” and ended up becoming a Fuller Brush salesman for several years. Learning that he was to be dismissed from that business, he went to another household goods outfit, and took half of his sales force with him, he said.

It was during his stint with Fuller Brush, a manufacturer of cleaning supplies, that Bregman said he started to hone his networking skills, which has been key to his success over the years.

It was through his connections with the local B’nai Brith organization, that Bregman became an investor in a new paint manufacturing company, Syracuse Paint and Varnish. He also handled its sales and marketing, and he owned a paint store in Shop City.

His first barter happened while he was with the paint company, and it would help launch him into a new venture. A local radio station had approached him to run some ads, but he didn’t have the funding. So, they worked out a trade — free airtime for a paint job at the radio station building.

Although he left Syracuse Paint and Varnish after about 11 years, that trade would lead to his involvement with the Trading Exchange, which is a clearinghouse offering goods and services to its members, who then earn credits toward goods and services they might need. In 1976, he became its marketing director.

Over the years, Bregman’s work in bartering has been written up in a number of trade journals. In 1983, reporter Jim Mulder wrote a feature in the Syracuse Herald-American Post Standard’s Empire Magazine, about the local bartering operation and its benefits to small companies and those who are starting up. In it, he called Bregman the “barter baron” and “Syracuse’s undisputed swap king.”

Whether “barter baron” or the honoree of lifetime achievement awards, Bregman seems to sum it well.

“I’ve had a helluva a life. I hope it continues for a long time,” he said.