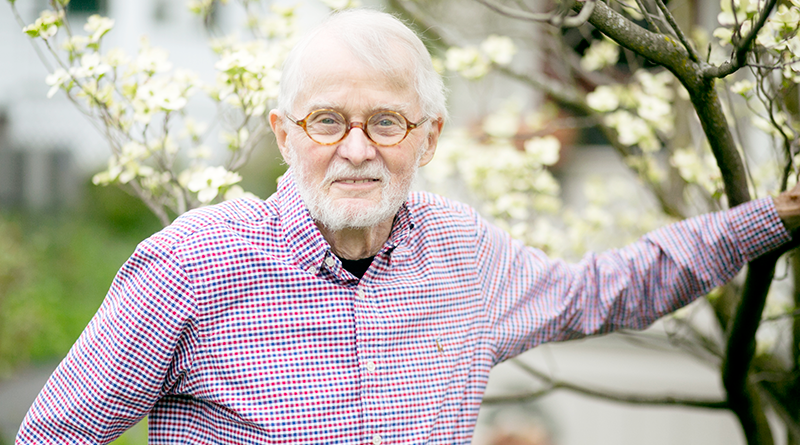 Longtime Syracuse Newspapers columnist Dick Case is heralded for his wit, charm and wisdom. But what makes him unique is the ability to find the special and unusual elements in people and places that normally wouldn’t make the news.

True to his Central New York roots, the Marcellus native graduated from Syracuse University, spent most of his writing career with the local metro daily and even taught graduate level courses at his alma mater. But it was mostly Case’s experiences outside of the classroom that shaped his voice and vision as a writer.

“I never got accepted into the journalism program,” Case, 81, recalled during a recent interview at his home in the Strathmore neighborhood of Syracuse. He graduated from SU in 1956. “I think I probably had too many jobs. I nearly flunked out.”

With the recent release of his latest book, “Salt City Trivia II,” published by the Onondaga County Historical Association, Case took some time to reflect on a long rewarding career that spanned different eras of the newspaper industries leading up to his continued volunteer work in the community.

Case has loved writing for as long as he can remember. Not long ago, he came across a story he had written as a youngster, “The Jungle Boy,” in his late brother’s scrap book. “I was maybe under the influence,” Case said with a laugh, “of the Tarzan movie.”

He joined the reporter’s club at high school, providing coverage of Marcellus High School events for a local community weekly newspaper. A neighbor, Wesley Clark, then the dean of Syracuse University’s journalism program, talked Case into attending SU. Case enrolled as an American Studies major and signed up to write for the Daily Orange on the first day of classes

Back then, all student staffers on the Daily Orange had to work on the production end of the paper once a week, which included helping with the printing press. He didn’t much like that job, but stayed on so he could pursue his interest in eventually becoming columnist. Case gradually worked his way up, writing movie reviews before he was promoted to a columnist position his junior year. His column, “A Grain of Salt,” was a combination of opinion and profiles. He also worked for a local news radio station, WAER, and worked as a copy boy for the Syracuse Post-Standard, changing paper for the teletype machines, answering phones and fetching coffee for cranky staff writers and editors. The environment was competitive, fast-paced and often tense. He loved it.

Case was drafted into the U.S. Army upon graduating from college. This was during the span of time between the Korean and Vietnam wars. He was assigned to a position writing radio scripts for the Army’s propaganda unit, which was based in Japan. Case’s reports, which included everything from news, to scripted dramas and soap operas, were translated into Korean and Mandarin Chinese and broadcast into China and North Korea.

“The goal was to get North Korean soldiers to defect,” Case said. “I never had any idea if it reached its target. It was the same situation then as it is now: The war was over, and there was a demilitarized zone. If I had to be in the Army, it was a good job to have.”

Shortly after returning home, Case caught up with his old neighbor, Wesley Clark, who told him that the Syracuse Herald-Journal (afternoon paper) was hiring. Case took the job as a general assignment reporter. His first assignment was covering a taxi driver strike. He also filled in for other staffers in a variety of beats, including crime and courts. The Herald Journal competed with the Post-Standard, so if the morning paper had a story first, Case often had to find something new and different for the same event and expand on it to counter the competition’s report.

Case met his wife, Sandra, at work. She worked in the classifieds department at the Herald Journal. They were later married and had three children, John, Laurel and Elizabeth, who also went on to work at Syracuse Newspapers. John Case previously produced a short satire film about infamous former Syracuse mayor Lee Alexander. Dick and Sandra have one grandchild.

Early in his career, Case took a one-year sabbatical from the paper to attend graduate school in Cooperstown. After that, in the last part of the 1960s, Case left Syracuse for Chicago to work as an editor for the Chicago Historical Association. He worked there for two years but continued to freelance for the Herald Journal. He was there during the 1968 Democratic Convention. “I remember walking to work,” he recalled of the unrest that occurred during the convention, “through a rising ring of tear gas.”

Case enjoyed the change of scenery of working and living elsewhere, but he couldn’t stay away from Central New York for too long. He returned home and resumed working here at the paper, covering higher education for a number of years before he was named a full-time columnist in 1979. The byline changed from Richard G. Case to Dick Case. In the beginning, he was worried about having enough topics to produce a column every other day. But when Case carved his niche as someone who would write about “people well below the level of historic scrutiny,” there was never a shortage of ideas.

There was the one about the man who lived in the smallest house in Syracuse. There was also a piece about folks in the Oswego County hamlet of Caughdenoy who liked to eat eels. Case had the freedom to travel to interesting places outside of the region, including the North Country and the Adirondacks. After the devastating ice storm of 1998, he talked to Amish residents in the St. Lawrence County village of Heuvelton about how they helped their “English” neighbors cope with the lack of electricity. Case never counted his columns but would estimate he’s written more than 1,000.

He is not without regrets. He got to know a group of inmates in the Auburn prison involved with a prison art project. Case wanted to showcase their talents and unveil the human side of these amateur artists, but in hindsight he believes he may have been too sympathetic to their situation without, on balance, thinking about the plight of their victims and their victim’s families.

“When led by the heart,” he said of the emotional issue, “instead of [being led by] the head.”

Case has maintained a good sense of humor as the times changed. He’s old school enough to remember the days when staffers smoked at their desks. Case himself smoked cigars and a pipe at work. One time, while interviewing a new director of the Syracuse Symphony, Case forgot that his pipe was still lit and noticed smoke coming out of his coat pocket.

“That’s when I decided to gradually give it up,” he said.

The early to mid-1990s may not have been considered the heyday of newspapers, but locally it was a fine time for Case and many of his colleagues. Syracuse Newspapers promoted their columnists heavily. There were billboards containing images of Case standing alongside I-81, or climbing out of a manhole. “Good Guys, Bad Guys, Big Guys, Little Guys” was a slogan used in the promos for Case and was also the title of his first book in 1994. It was a collection of columns. He later published “Remembering Syracuse,” and “Up North,” a collection of columns Case wrote about people in the Adirondacks and the North Country.

With so many changes over the years, including the merging of the Post-Standard and Herald-Journal staffs, budget cuts, and the prioritization of an online product instead of a daily newspaper, working as a columnist in the Salt City was always a pleasure and an honor for Case. That’s not to say he didn’t have bad days. One of the worst days on the job was when a column he wrote about a topless dancer was cut by an editor for fear that readers would be offended.

“The point I was trying to make was that she was also a housewife and a mother,” Case said. “They didn’t see it that way. They stated their reasons. I was mad, though.”

The last bad day at work was in 2012, when Case and many other veteran employees were informed that their positions would be eliminated under a massive cost-cutting initiative that also scaled back the paper’s home delivery.

“I probably should have retired long before I was shown the door,” he says. “But I had the best job in the world. I never thought about leaving.”

Still, Case had plenty of work waiting for him doing something he loves before he would have a chance to taste the boredom of retirement. The Onondaga County Historical Association needed his skills and institutional knowledge to educate local residents, promote their work and insure that the events of this unique community are well-documented for future generations to learn about. There was a desk with his name on it the day after he exited the Clinton Square building, then headquarters of the Syracuse Newspapers, for the last time. Case works at the Historical Association three mornings a week on a volunteer basis. With Case’s help, the organization published Salt City Trivia in 2014 and Salt City Trivia II this past December.

The former columnist’s volunteering has included work at Contact Community Services mental health support hotline, Vera House, Huntington Family Centers, Samaritan Center and Unity Kitchen. Case and his wife did a fair amount of traveling in the past, with regular trips to Florida and the Carolinas, but as they get older, he says, they are more cautious about traveling too far or being away from the area too long. They are both pretty health-conscious, “enjoying chicken cooked many different ways, but not eating red meat.”

To stay vibrant, Case uses his exercise bike daily and walks around his neighborhood, stopping at a corner store to pick up the Post-Standard and the New York Times Reading often, staying in touch with old friends and continuing with his volunteer work helps the old-time newspaper veteran stay sharp.

For the time being, Case has no plan to stop writing about the area he loves. This was not the first time he was asked about why he continues to care about Central New York.

“I ask myself that, and my wife asks that,” he said. “This is where I’m from. I have an ancestor who settled here after the Revolutionary War. I feel a tug from the land, I guess.”