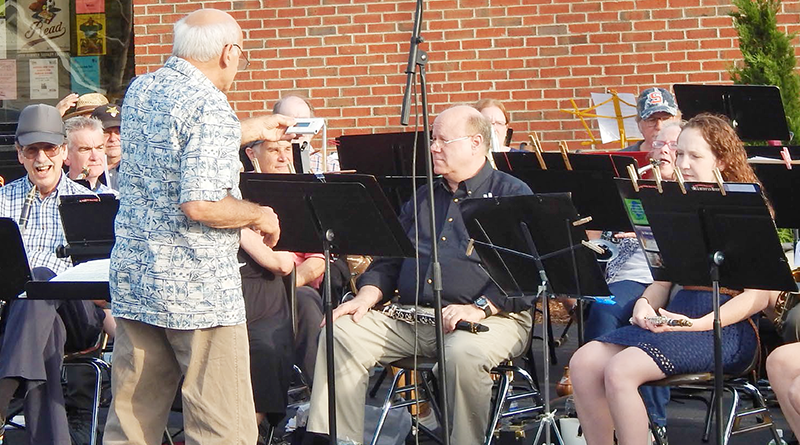 When Lyncourt Community Band musicians warm up their woodwinds, brass and percussion, they are a discordant lot at best — until their conductor signals for silence and their notes emerge on one beat, launching into a “West Side Story” song.

The Lyncourt Community Band itself evolved in much the same way, with dedicated musicians from all walks of life bringing their crazy mixture of musical backgrounds and abilities into harmony with each other. They keep it going with the guidance of three committed conductors and a passion for music re-discovered, for many, in their later years.

The band has attracted a successful mix of former students from their high school teaching days, professional musicians, and older adults who dusted off instruments they once played or bought new instruments to start all over again.

“My flute literally sat under my bed for 30 years,” said Laurie Cecconi, 57, a former high school student of DeAngelis. Picking it up was worth it. Two seasons ago, Cecconi played a solo for the band’s selections from Tchaikovsky’s 4th Symphony.

Just like Cecconi, others took their seat in the band so they could re-vitalize their musical interest in a community environment. Mark Franklin, 58, a retired radiologist, was Nuzzo’s high school student way back when. “I found I missed that part of my life when I was playing music, and I thought, well, I can figure it out again, he said.

Seven years ago, Franklin bought a new saxophone. “So I had to learn to play it. Now it gives me a direction for my brain,” he said.

Another saxophonist, Kim Fagan, 55, had a similar path. A French horn player in high school, she started learning the saxophone 13 years ago, and heard about the Lyncourt Community Band from a friend.

“There was a point where I was thinking every line of music as it went from my brain to my fingers. Now it’s automatic,” she said.

As she plays Big Band standards like “Autumn Leaves” and “Harlem Nocturne,” she realizes, “I’m a saxophone player now.” Aside from new music and new friends, Fagan has taken on an integral role in the band’s operations, that of business manager who coordinates communication, publicity, concert programming, and music distribution.

The band has many more returning learners. Percussionist Dick Calagiovanni, 68, retired from Verizon, picked up his drumsticks again in 2014 after 36 years of not playing, and Bob Marsman, a retired Syracuse police sergeant, says, “I realized my early desire to play trumpet at 52.” Now 70, he’s been playing in Lyncourt for six years.

Of course, some of the musicians have been playing for life. Two of Ron Nuzzo’s former students in the band have professional experience. The band’s go-to trumpet soloist, Rhys Hensen, 61, was a studio musician in Los Angeles for years and led his own band, which contracted for large events.

Dan Lawitts, 64, was the timpanist/artist-in-residence for the Concord Chamber Orchestra in the Milwaukee area, and played for other bands and orchestras in Milwaukee and Chicago, while doing double duty on his day jobs.

In tune with music

Whatever their musical level, the musicians thrive on the week-to-week connection with other musicians and on the possibilities inherent in practicing and performing all kinds of music from Tchaikovsky to George Gershwin to Cole Porter.

“It transports you to a different realm, “ says Carol Dumka, a retired music teacher and a bass clarinet player. “When I was a teacher, I would tell my students I didn’t expect everyone would want to play professionally, but they should continue their music throughout their lives. I’m a believer in community bands.”

So is Shannon McGlew, 24, a Syracuse University law student from Buffalo and one of a handful of younger generation players in the band.

Last year, Shannon, a flutist, found the band on Facebook when she was looking for an outlet outside of her law studies. Now she values not only the exposure to experienced musicians but the connection beyond her school campus.

“I feel attached to the community now. I’ve met people who are not students. And I realize that the music is not just for me — it’s for the community and the concerts,” she said.

Community, music, concerts — this is the life of the Lyncourt Community Band because they are DeAngelis’s life. Of the three conductors, it is DeAngelis who the musicians regard as their founding father.

After retirement from the Lyncourt School, where he was band director for 54 years, DeAngelis started the Lyncourt Community Band along with his colleague and former middle-school student, Sam Julian.

“We started with 12 musicians who could barely play ‘Twinkle Twinkle Little Star,’” he recalls with a chuckle. Now 40 strong at their maximum, they can perform Gershwin’s “American in Paris.”

Like a father, DeAngelis is both generous with his compliments, praising all of his “outstanding people,” and conscientious about challenging them.

Having played bassoon for the Syracuse Symphony for 35 years, he draws on his background to add classical pieces to the band’s repertoire.  At the same time, he is conscious of the musicians’ varying ability levels.

“He is intuitive in the way he understands how all abilities fit together,” Fagan said. “He’s bringing the band to higher levels.”

DeAngelis himself exclaims with his wide smile, “To see them improving is one of my life’s joys.”

DeAngelis is highly respected in the Syracuse area. This year he was the recipient of a special honor — a 2017 Syracuse Area Music Award for Hall of Fame Music Educator of the Year.

The Lyncourt School auditorium is named after him, and his band’s popularity is evident in the enthusiasm of the wall-to-wall audience that fills St. Daniel’s gym in Lyncourt for the annual holiday concert every December.

Monsignor Eugene Yennock, 91, pastor of St. Daniel’s Parish, attends all the concerts at Lyncourt and provides concert and practice space in the gym. He speaks warmly of DeAngelis, a life-long friend. “There’s his enthusiasm, his skill, the heartfelt feeling he puts into his musical endeavors,” Yennock said. “He’s influenced so many students. They in turn become teachers and musicians and transmit music to others.”

Now 86, DeAngelis said he realized in his mid-70s that he ought to start “pulling back,” as he puts it. So he brought in two other conductors.

We have a trio of approaches that makes the band work together better than ever,” he said.

He recruited Nuzzo straight out of retirement from the Jamesville-DeWitt School District. At 70, Nuzzo was up for a new challenge.

“This is for me,” Nuzzo recalls thinking after his first rehearsal. He has been playing trumpet since age 11 and lived briefly in New York City in his youth, hoping to break into the music business.

He abandoned that idea when he heard of an opening in the Jamesville-DeWitt School District and taught music there for 49 years.

“I made the best decision of my life,” he said. “I loved every minute of it.”

How does Nuzzo feel about conducting a band now where some of the members are former students of his?

For one, he can now give them a challenging piece like Berlioz’s “March to the Scaffold.”

“Think of it,” he said. “It’s so rewarding to have them think enough of me that they want to be in a band with me now.”

DeAngelis’s other conductor, Sturge, is a colleague from Signature Syracuse, a nonprofit organization where they both volunteer with city schoolchildren.

Now 60 and retired from Syracuse schools, Sturge teaches part-time at the Syracuse Academy of Music and plays trumpet in three other bands. Always experimenting, he recently dusted off his dad’s E-flat sousaphone, which has been “hanging around for 50 years,” he said.

If Sturge loves performing, he finds his conducting just as rewarding. “There’s an energy loop here. Whatever energy you put into it, you get back sometimes more than you put into it,” he said. And, he gets to work with “really loyal, hard-working people,” he added.

For Sturge, conducting has meant new friends, an opportunity to try new literature, and another place where community and music meet.

As Sturge so succinctly puts it, “The ‘community’ in community band is very literal.”

For the Lyncourt Community Band, this certainly sums it up. When they walk into the rehearsal room and warm up, with their wild assortment of notes and chords and cymbal clangs, they are individuals. And when they play together, on a literal level and beyond, the harmony begins.

All are welcome for the Lyncourt Community Band’s concerts in June:

No other concert was on the schedule as of press time. For more information, go to http://lyncourtcommunityband.webs.com/ or visit the Facebook page of the band (just go to Facebook and type “Lyncourt Community Band”.