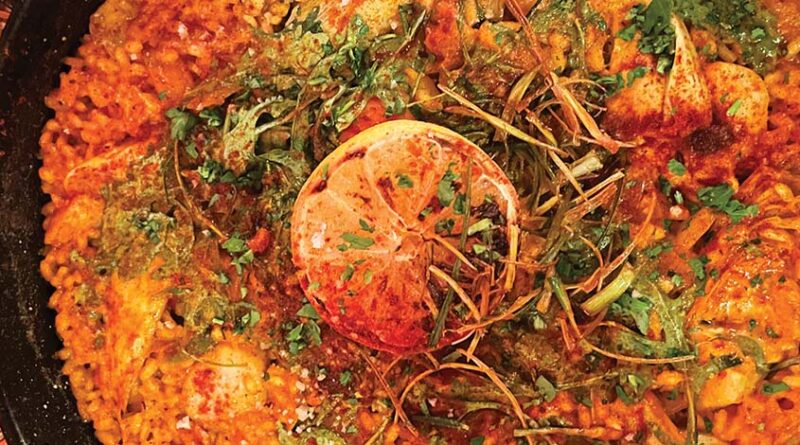 If there’s one thing to take away from the pandemic, it’s a good reset. This can be a personal, a creative and even a business-related pause and consideration.

When Otro Cinco, located at 206 S. Warren St. in Syracuse, hit the pause button in late 2020, who knew what to expect? There were many unknowns.

The younger sibling of Alto Cinco resurfaced, however, with a new approach.

Depending on familiarity with the cuisine of the restaurants and Otro’s popular pre-pandemic paella nights, it’s almost obvious the restaurant resurrected with a Spanish focus, shedding itself off the Mexican fare of tacos, burritos and the like.

Otro still boasts the homemade meals and fresh ingredients but focuses its attention now on paella, tapas and more. Getting ahead in the post — if you’re not into flavor, this is a good spot to stop reading. Otro is full of it.

The meal in the dimly lit restaurant was kicked off with a Ziggy Stardust ($12). The David Bowie alter ego was as colorful as the late musician’s creativity with plum-infused tequila, rosé aperitivo, lime, cava and sage bitters. The cocktail isn’t very sweet which is right up my alley.

First came the buñuelos de garbanzo (the menu is bilingual) or chickpea fritters ($8). For anyone who knows me, I love a good fritter. These hit the spot. The butternut squash and chickpea fritters came with a chai yogurt to dip into. Although these flavors may not sound like they’d go together, it’s all about the taste. The crispy coated fritters with a soft interior paired well with the yogurt.

For small plates — veggies. The mushrooms or setas marinadas ($10) were marinated with sherry and fresh herbs. Stocky leek columns were placed around the plate as delectable and decorative additions. The mushrooms were sautéed perfectly, not slimy nor mushy.

The croquetas ($12) sat on a plate with a generous drizzle of saffron aioli. The small chicken, spinach and potato croquettes packed big flavor. Sharing the aioli was a difficult part. The artistic drizzle was unfortunately ruined in the process of enjoying the dish.

The calabacín frito or fried zucchini ($9) was presented in a way that defied expectation. The spiralized, coated and lightly fried zucchini was a webbed ball on the plate of greens. The construct was sprinkled with a citrus vinaigrette. Similar to the classic take on fried zucchini, the taste was the same but with a zesty pinch.

And then there was paella. The Spanish rice dish is pretty versatile and combined with a variety of ingredients. That night we enjoyed the shrimp and scallop paella. The shellfish option felt right.

At Otro Cinco, there are three sizes of paella to choose from — 11-, 13- and 15-inch skillets all with different prices. The prices are not universal for each option either. Respectively for the scallop and shrimp paella, the sizes were priced $34, $42, and $48. Being two people, we opted for the smallest option, which serves one to two people. In our opinion — especially when ordering tapas or other large plates — the small paella could serve three or maybe four people depending on appetite.

Finding the tender shellfish was a fun hunt. Occasionally, we’d come across one of the many artichoke hearts. We also found a fair amount of leftovers when the utensils were retired.

However, they didn’t stay down for too long. The St. James almond cake ($9) with blueberry compote was worth it. The cake, although it felt thick to cut into, was light when biting into it. The almond was definitely the most prominent flavor but it was backed up with a nice citrus zest.

Aside the food and atmosphere, a huge compliment has to be made to the hostess and our server. Both were incredibly welcoming and tentative, frequently stopping by the table and conversing beyond the typical check-in. Compliments, of course, go to the chef as well.

I know many people and have gotten into debates on weather they’re “Team Alto” or “Team Otro” — but it’s entertaining and positive. With their current iteration, Otro distinctively stands out from its older sibling. It’s just as seasoned.

Featured image: At Otro Cinco, there are three sizes of paella to choose from — 11-, 13- and 15-inch skillets.