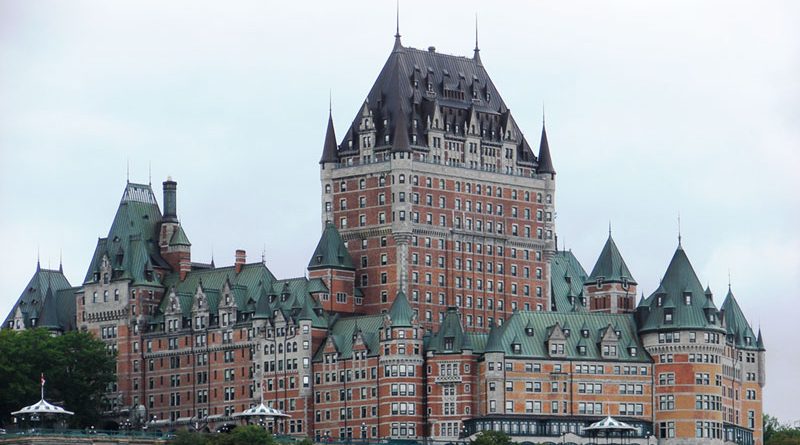 Can’t make it to France just yet? Then visit Quebec City, the most French place in all of Canada and the capital of the Canadian province of Quebec. It is one of the oldest cities in North America with history, adventure and culinary delights. It is the heart and soul of French Canada and an all-season destination.

1. City Tours: First-time visitors should consider the hop-on hop-off tour on a London-style double-decker bus, which visits all the important sites in the city. It makes 12 stops but those with enough time should consider taking it once around to enjoy the informative commentary and decide what places they would most like to visit then hop off to explore. There are also horse and carriage tours along with walking and bike tours.

2. Old Town: Old Town is the historic center of the city with Our Lady of Victories one, of the oldest churches on Place-Royale. Don’t miss the massive mural nearby depicting Old Quebec and many of Quebec’s leading writers and artists. It is an UNESCO World Heritage site. A funicular with the main entrance located in the historic House of Louis Jolliet (explorer of the Mississippi) connects the Old Town to the Upper City.

3. Museum of Civilization: This is a culture-packed museum, with traveling exhibits that covers everything from religion to Rome’s history. It is the place to learn about the history and culture of Quebec but changing exhibits and the museum’s diversity make for an entertaining visit, whether it’s your first time or the hundredth. Learn about Canada’s “First People.” Topical guided tours are included in the admission price.

4. La Citadelle: The star-shaped fortress perched high above the St. Lawrence River has protected the area since the 1750s. Once a formidable French fortress, it now hosts changing of the guard ceremonies every summer day at 10 a.m. and soldiers beating the retreat on drums every Friday at 7 p.m. in the summer. Their guided tour shares information on more than 300 years of history.

5. Plains of Abraham: Located next to the Citadelle it is where the fight for supremacy between the French and British empires occurred. The park is the scene of the 1759 Conquest, which changed the fate of North America. Apart from its historical past, there are over 250 acres of meadows and grassy knolls making it the Central Park of Quebec. There is a museum dealing with its history, a variety of activities and the Joan of Arc Gardens.

6. The Arts: The Museum of Fine Arts, located on the edge of the Plains of Abraham, has more than 25,000 works produced by Quebec artists dating from the 1700s and including Inuit art. The museum has permanent and changing exhibits including one featuring the 260th anniversary of the Battle of The Plains of Abraham. They often have special events and workshops. Free tours along with digital tours on mobile devices are available. Quebec City has several art galleries including Centre Materia, an artist-run center that promotes artistic research and creativity. Each year from mid-May to mid-June the Carrefour International Theater has a contemporary theater festival.

7. Parliament Building: The 19th century house of government is fronted by statues of people and events important in Quebec history. There is a free tour of the building and it is possible to make prior arrangements for a reserved seat to observe the National Assembly. The National Assembly Library regularly house thematic exhibitions. The gardens are a pleasant place to stroll. There is a restaurant and a café open to the public.

8. Notre Dame Cathedral: The cathedral is the oldest church in Canada and has been designated a World Heritage Site by UNESCO. The ornate ceiling glitters with gold leaf. Tours are available during the summer that will unravel its history through two fires back to 1647. Visitors can see but not pass through the Holy Door, a real door in the wall of the Chapel of the Sacred Heart. One is only allowed to pass through the door on Jubilee Years, which only occur every 25 years. Check out their schedule of concerts.

9. Culinary: Poutine is Quebec’s signature dish — fries, gravy and cheese curd — that is spreading worldwide. Tourtiere is Quebecois meat pie that can include minced pork, beef or wild game. Foodies might enjoy one of the several walking or bus food tours. There is a special food tour at Christmas time. Maple syrup is a good take-away gift. Afternoon tea at the Fairmont Le Chateau Frontenac is an elegant affair in an elegant setting. There are also tours of the historic hilltop hotel that was once a 17th century castle complete with turrets.

10. And more: The Museum of Naval History includes a small section dealing with the Battle of Oswego along with other fascinating exhibits of importance to Quebec’s strategic location. Montmorency Falls, which is higher than Niagara Falls, is often included in a Quebec City tour where there is a cable car ride to the top and viewing platforms. The falls are especially photographic in the winter. There are also trips to the shrine St. Anne de Beaupre with glorious stained glass, paintings, mosaics, and stone and wooden sculptures. Several ski resorts are in close proximity to the city. Check out their unique ice hotel less than 45 minutes for the city.

Photo: Fairmont Le Chateau Frontenac in the heart of Quebec.