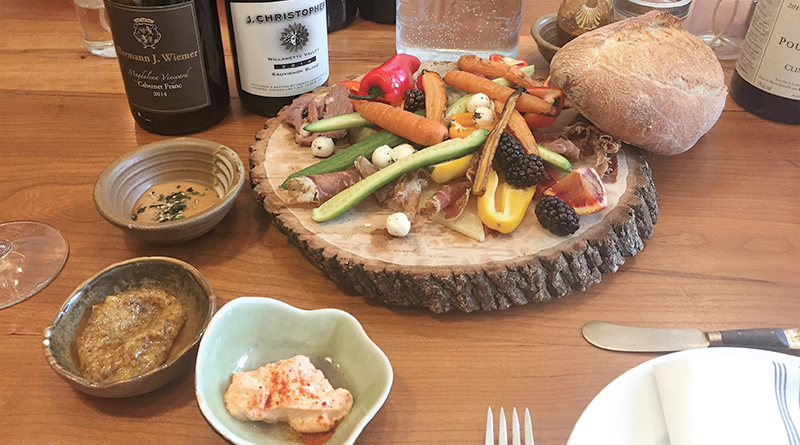 We mulled over the wine list and snuck another slice of jamon as we waited for the rest of our dining companions to arrive. Not long after all 12 diners arrived, we were given playing cards that corresponded to a seat at the dining room table and sat down.

FLX Table is a lone 12-seat table, where dinner is served twice nightly from Thursday to Monday. It is located on a one-way alley with no sign except for the restaurant’s logo on a single piece of paper and a sample menu taped to the door.

The only menu is a list and descriptions of the five courses, selected by chef Christopher Bates. The wine list was filled with selections from the Finger Lakes and elsewhere, but we, like everyone else at the table, opted to go for two of the five beverage pairings (Baller and FLX Baller, both $55) and again put our meal in Bates’ capable hands.

In addition to being chef and co-founder of Element Winery in Arkport, Bates is a master sommelier, the highest level a wine professional can achieve. As of this writing, there are currently only 236 master sommeliers worldwide.

Dinner started with a selection of cheese, raw and roasted vegetables, fruit and charcuterie presented on a sliced tree trunk slab, along with a selection of dipping sauces, to be shared between two diners. Platters of several types of butters, including brown butter, smoked pork schmaltz and a yellow turmeric butter shaped like a rubber duck, were passed around the table, as one would do at a family dinner.

The next dish highlighted yellowfoot, lion’s mane and maitake mushrooms, served pickled, raw, roasted and pureed to a hummus that served to bind the dish together. Black garlic and oniony ramps provided a fresh kick of flavor.

The menu at FLX Table changes often, but judging from past and subsequent menus, our next dish is a frequent appearance in some form or another—and for good reason. That same smoked pork fat that we spread on our loaves of locally-baked sourdough bread in the first course was whipped into a bowl of polenta.

An egg cooked to 64 degrees Celsius in a sous vide water bath was placed on top of the polenta. My knowledge of the Celsius temperature scale was admittedly rusty, so I had assumed the egg would be barely cooked with a yolk that would run over the dish at the slightest fork prick.

Instead, the yolk had thickened, but not hardened, perfectly mimicking the consistency of the polenta. A dusting of black licorice on the egg helped cut some of the richness from the small piece of unctuous foie gras and streak of black truffle puree on the plate.

We visited FLX Table on Easter Sunday, so to recreate the biblical lamb with bitter herbs, Bates rolled a coarse lamb sausage in a seaweed powder and served it with salty sea beans, piquant black olive puree and ethereally tender “pee-wee” potatoes, with a scattering of finely chopped pitch-black dried olives over the plate.

The seaweed powder gave the meat a grassy and intensely savory flavor that paired well with lamb’s natural mild gaminess. The sea beans, also known as sea asparagus, gave the dish a burst of salty sea freshness, like slurping down a freshly-shucked oyster.

Dessert that evening was a chocolate pot de crème served with rosemary ganache, peanut dust, bitter almond brownie and brown butter caramel, topped off with a light meringue. Additional brown butter caramel was passed around the table. The unofficial sixth dish was a homemade marshmallow — with a catch. Diners had to walk to a nearby bar to receive it, from where they can keep the good times rolling.

Earlier this year, FLX Table was named the best new restaurant in the country in a USA Today 10Best poll and after eating there, it’s clear to see why. Dinner at FLX Table is a deeply intimate experience, like being invited to an exclusive dinner party where all the guests know how lucky they are to be there.

The food and drink is pure fine dining, but even with the initial apprehension at dining at a table of strangers, FLX Table is immensely comfortable and welcoming, thanks in part to the mismatched chairs and silverware and Eminem and Frank Sinatra playing in the open kitchen. You won’t feel weird ripping off a piece of bread to scrape up the last of the butter, or reaching to pick the last piece of smoked duck breast from the farmers board.