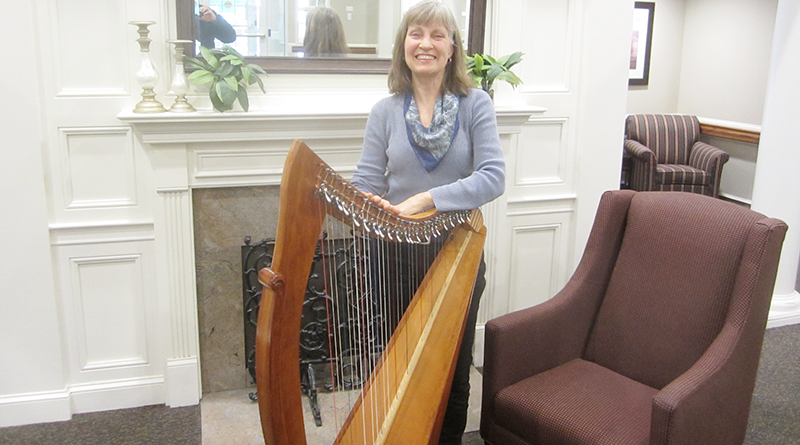 There is something seductive about the harp. Its serene, enchanted melodies can draw people to it like moths to a flame.

That’s what happened while sitting down to interview Alexandra Coursen, runner-up in the recent Hidden Gem international harp concert and composition competition in England. As we sat near her harp to chat at the Nottingham nursing home in Jamesville, employees wandered in, attracted to the instrument Coursen had just been playing.

One employee, William Kitchcart, was invited by Coursen to try his hand at the harp. Kitchcart is a self-taught musician and seemed to be a natural on the instrument. As we sat to talk about Coursen’s journey with the harp, we were serenaded by the soothing tones of the harp as Kitchcart plucked its strings.

“He’s amazing,” Coursen remarked. “He’s a natural. He needs to get a harp. There wasn’t one bad note.”

There haven’t been many bad notes in Coursen’s path into music either. The 61-year-old started on the piano when she was younger. She practiced for hours as a child and eventually landed in Oberlin Conservatory in Ohio. But she found the expectations at that level weren’t a good fit for her musically, where everyone had deep reservoirs of ability.

“I studied at Oberlin Conservatory,” she said. “I didn’t remain there. I transferred to the college. It’s a very intense environment to go to a music conservatory. There are so many people who are so good at a conservatory. You realize what’s in the cards. I didn’t want to be a piano teacher so I got out of the conservatory very quickly and I graduated with a degree in government. I then went on to law school at Syracuse, became a lawyer, practiced law, and retired about two years ago.”

It wasn’t until well into her career that she discovered the instrument that would become her new passion.

“About 25 years ago, I learned that you could buy a traditional harp — a Celtic harp — not one of the big harps that you find in an orchestra. They were affordable,” she said. “You could carry them without all the fuss that you’d have with a big concert harp. I loved the sounds and essentially taught myself. There are books on how to teach yourself harp. It’s very similar to the piano when you read the music.”

Coursen took lessons with some harpists in the area, but they were really more or less concert harpists. Her initial involvement with the instrument was on a slow burn. She had young children at home who took up her time. When several of the strings broke on her instrument, she basically ignored it for a while.

But about 10 years ago, she founded a local group — Harmony of Harps — that she could play with. With her kids grown, she became more serious about the instrument.

“That got me going,” she said. “When I first went to this ensemble, I was playing with one finger with one hand because I hadn’t been practicing. You must practice, at least I do, to keep your faculties. We get together once a month. We perform at the Scottish Celtic games. Usually we have a concert at Christmas time.”

Then the harpist started playing in Irish sessions in pubs around Syracuse like Kitty Hoynes and J. Ryan’s. An Irish seisiún is an impromptu musical performance where random musicians will appear at an Irish pub and play old, familiar tunes. There is no music on paper to read and play.

“I had to dig deep into this Irish tradition of no music,” Coursen said. “It’s very instinctive. If you’ve been doing it from day one, playing by ear, it’s very natural. For some classical musicians, it can be natural. I don’t think it was natural for me. As I’ve said, I really like those notes on the page. The more you do it the better you get at it.”

While immersing herself more into the mysteries of the harp, Coursen decided she wanted to compose for the instrument. She came up with a unique way to create pieces. She takes the letters in a person’s name and applies a key to each of them, based on how they line up with the alphabet.

“Let’s say I’m writing this first piece of music and I’ve never done this before,” she said. “This was two years ago. The baby’s name is Michael. M is going to be an F (key). I wrote this for this little baby shower. Michael Thomas Jones. There’s the melody with the notes that are assigned to the letters of his name. It’s sort of cute and personal. From there I went on to do another baby. I wrote it in two hours. It’s a one-page piece of music —quick and dirty.”

Coursen applies varying amounts of effort to creating these “name pieces.” She took several months to compose a wedding name piece for her sister and brother-in-law, joining the names of the bride and groom melodically.

The new composer wanted to continue to improve. She discovered an online mentorship program led by renowned jazz harpist Deborah Henson-Conant. It was there that she learned about the Hidden Gem concert. It was free, so she entered.

“I sent it off in the email,” she said. “They announced the finalists 16 days later. Ever since I learned I was a finalist, you’re smiling inside. I was the only woman. These finalists are in composition school. I’ve been sort of doing this for fun.”

She didn’t win the competition, but the name piece of hers that was played, “NESHAMA” qualified her to be a runner-up, which means her music will be published and the concert will also be available on CD.

Coursen is tickled by her success and plans to continue to pursue playing the harp and composing music for it. She writes both name pieces and conventional pieces. The instrument has certainly seduced her, as it does many others, with its mesmerizing music.

“The sound is seductive,” she said. “I was about to say enchanting, but I really have to say seductive. To sit down and practice the piano is tedious. When I practice the harp, I have to stop myself. You get seduced by the sound.”