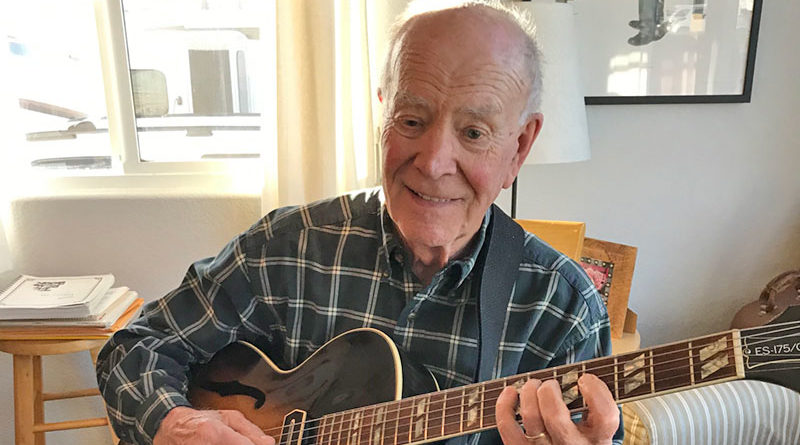 Like so many Americans, Donald Miller never got over the Vietnam War.

He was eligible for the military draft in the 1960s but was not called to serve. He felt unsettled about that during his time in college and, after embarking upon a successful career as a teacher, musician and composer, came up with something in 1986 that would give him some peace of mind and, more importantly, honor military veterans.

“I always felt guilty that I didn’t serve,” he said. “That stayed with me, and I felt like I needed to do something. We have a national anthem, but we don’t have an anthem of remembrance for veterans.”

Not bad for a guy from the Midwest who grew up picking hillbilly mandolin and Gypsy jazz guitar.

Miller, 82, is a retired professor and former chairman of Onondaga Community College’s music department. The Jamestown, Ohio, native was raised in a musical environment where his mother played the piano and his uncle played guitar. Miller took up the mandolin at a young age, idolizing Django Reinhardt, a guitarist and composer who is said to be the first jazz talent to emerge from Europe.

During high school, Miller was invited to play tuba in a community band. Although he could not read music, Miller was able to blow out the correct notes by memory.

During his audition for admission into the music program at the University of Cincinnati, Miller’s instructor initially showed him the door after quickly determining that he could not decipher the pages in front of him. Miller then demonstrated that he could sing back a song played on the piano note by note, and he was offered admission to the school on conditions that he completed a remedial program where he would quickly learn to read music.

“I started to walk out after that and I remember him yelling, ‘get back here!’” Miller recalled.

Miller began his college career majoring in music, with a stint as a pre-med student before completing a degree in music education. All the while, he played guitar in progressive jazz combos four to five nights a week. His favorite gig was Jazz Bohemia in downtown Cincinnati on Friday nights.

“They didn’t have a college major in guitar, which was a blessing in disguise,” he said.

Miller continued on to complete a doctorate program in church and sacred music. He credits his composition teacher, Halsey Stevens, with inspiring his creativity. He landed a job as a church choir director before he got into teaching music. His career later brought him to Central New York, where he taught at Onondaga Community College and Le Moyne College.

Miller was a big fan of contemporary jazz artists like the Dave Brubeck Quartet, George Benson and Barney Kessel, but he still enjoyed teaching classical guitar.

Giving back to craft

Reflecting on his own experiences, he invented a methodology for teaching self-taught guitarists how to read music through a group setting where each musician played a different part in a composition.

Miller’s curriculum included several themed books, including Christian hymns, Hispanic songs and Renaissance music. He also hosted more than 30 workshops across the country to promote the curriculum. The workshop at the Guitar Foundation of America in San Antonio, Texas, sold out in 20 minutes, noted his wife, Mary Miller.

“I didn’t expect them to be that popular,” Donald Miller said. “I wrote them with the idea of trying to bring guitarists up to the standards of a violinist. But it was easy to learn because each person had their own part, so in a group setting they were forced to learn it.”

In 1986, Miller, while still teaching at OCC, set out to create an original work that was inspired by the inscription on the Tomb of the Unknown Soldier in Arlington National Cemetery. The composition is scored for a chorus, three trumpets, two trombones, and a tuba, timpani and organ. He carefully chose the lyrics to be all-inclusive since the religious beliefs of the Unknown Soldier, if in fact they had religious beliefs, were unknown. Hal Leonard, Inc. published the piece and donated all of his composer royalties from the sheet music to the Vietnam Veterans of America and the Paralyzed Veterans of America.

“It has long been my hope that this piece might have a wider distribution and in so doing brings comfort and healing to all who have had a loved one die in service to our country,” Miller says. “My wish for our veterans is that they may hear in the words and music of the piece a message of gratitude for all the sacrifices they have made.”

Miler recalled that the melody just came to him. “I wrote it on a brown paper bag,” he said.

In 2006, the North Carolina Master Chorale in Raleigh, North Carolina recorded it as a CD. Three years later, the composition won the Freedoms Foundation at Valley Forge George Washington Medal of Honor. Word of this special song spread over the Atlantic Ocean, and on June 6, 2015, the Normandy Museum in France began playing the song annually in commemoration of D-Day.

“I had no idea it would get to this point,” Miller said. He credits his colleagues at OCC, David Rudari and Sue Tormey for leading efforts to get the composition recognized at the state level.

After his retirement from OCC, Miller continued to compose. His body of work includes arrangements that have been performed by the former Syracuse Symphony Orchestra. He and Mary spent time travelling across the country to visit their five grown children, three of whom had served in the military. The couple also flew overseas to attend live performances and learn more about music.

These days, Donald and Mary Miller spend their summers in Sylvan Beach and the colder months in Arizona. Donald plays guitar regularly with an 18-piece jazz band based out of Mesa, Arizona. He also volunteers as the chorale director with an interdenominational church. When he does get back to Central New York, Miller sporadically sits in for jam sessions at Funk ‘N Waffles in Syracuse.

Even at his age, Miller never gets tired of plucking his guitar, belting out a tune and writing melodies down as soon as they pop into his head.

“My professors told me, just because something comes easy, doesn’t mean it’s not good,” he said. “And nothing helps you stay sharp like music.”