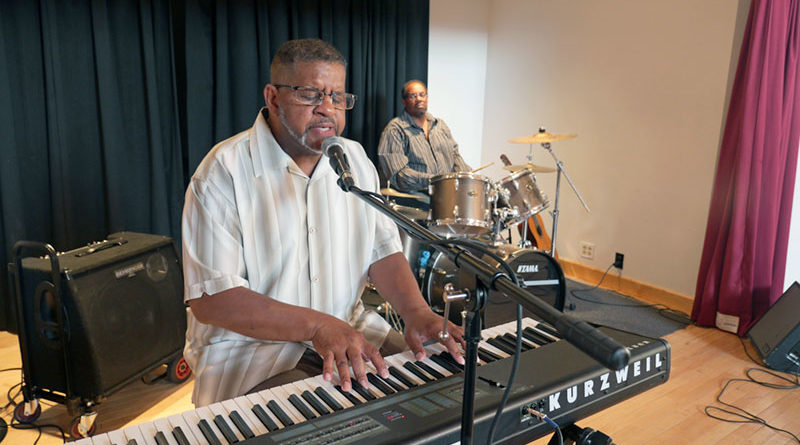 Central New York is well known for being a hotbed of music performance.

And one of the hottest in this Mecca of music is Sam Wynn, a 63-year-old virtuoso of keyboards and vocals who has toured the United States with The Shirelles, The Drifters, The Coasters and even Bo Diddley.

Today, he is heavily involved in music throughout the area, performing at Harborfest, Jazz in the City, Jazz Fest in Syracuse and Binghamton, the Pan Am Village at the New York State Fair, Juneteenth and even serving as minister of music at his church — Prince of Peace Missionary Baptist Church in Syracuse.

But it wasn’t always this way. There was a time when the love of his life, music, led Wynn down a dark road.

“When I was 14 years old, I started doing drugs and drinking,” Wynn said. “I was drinking, smoking weed. You want to be part of the scene. I never thought it would take me as far as it did.”

Wynn’s musical journey begins at age 5, when his grandmother in Yonkers shipped a piano up to Wynn’s home in Utica. Young Sam had shown a love for the instrument while visiting and his grandmother said she would give him the piano if he was serious about it.

“I had about a year of formal lessons, but after that, I pretty much learned on my own,” he said. “I could hear a song, listen to it a few times and then sit down and play it. That is a gift.”

From there, Wynn moved away from music for a bit and was involved in sports at school and at the Boys and Girls Club in Utica. “Sports came and music kind of went,” he said. He ran track and played a lot of basketball.

Then as a young teen, a friend asked him to join a band. He loved it. But this is when he also came to know the musician’s lifestyle — lots of late nights at gigs, too much alcohol and dabbling in drugs.

“I ended up spending nine months in a juvenile detention center,” he said. “I was pretty rebellious.”

It was then he moved to Syracuse. He worked for a time as an auto upholsterer working on car seat covers and interiors, a trade he had learned from his father.

“But when I was 18, an offer came to travel to Nova Scotia and all through Canada,” he said, working for musicians who were on the James Brown label. This is when alcohol and drug addictions really took hold.

“I would buy alcohol and cocaine. It would take over the consciousness of what I was there for,” he said. “And I was always broke,” said Wynn, noting he would spend money from his gigs on more alcohol and drugs.

He began touring the country with The Shirelles and The Coasters and eventually moved to South Carolina. He performed at the large hotels and casinos in both Atlantic City and Las Vegas.

“I would stay up all night gambling. I really thought I was enjoying myself,” he said. “But I would leave each weekend with no money.”

He moved back to Syracuse and performed in and around the city. “It just got worse,” he said of his addictions. “After a while, I couldn’t find any side work. The addictions wouldn’t allow me to work very long. I started not liking who I was.”

It was time for a turnaround. Wynn said he went to Narcotics Anonymous and attended programs at the Rescue Mission and Salvation Army.

“I needed to try for a different path. I started listening to what God was and who Jesus was and what they meant for my life,” he said.

And he had to stop playing music.

“Music always took me back to using,” he said. “So I had to take some time away from it. I had to stop playing music — stop being around that kind of lifestyle. I had to learn how I was valued as a person. I had to put the drugs down and be accountable. I began giving thanks and helping others.”

Today, Wynn is nearly 11 years clean. He is back into music. He helps homeless, youths and less-fortunate people around town. He gives back. He shares what he has learned in his programs about life, God and Jesus Christ.

“Everything came together — I learned the goodness of Jesus,” he said. “And then a lot of opportunities opened up.”

“I am happy to be clean and alive,” Wynn said.

He will continue to attend his programs and giving back to the community. And he will be forever thankful for the help in turning his life around.

“I will never be able to give back what he [Jesus] did for me,” Wynn said. “Now, people are starting to see me as a different person. People accept me as Sam.”

Photo: After many ups and downs, Sam Wynn, 63, is back on playing  keyboards.  He also helps homeless, youths and less-fortunate people around town. Photo courtesy of Rescue Mission.