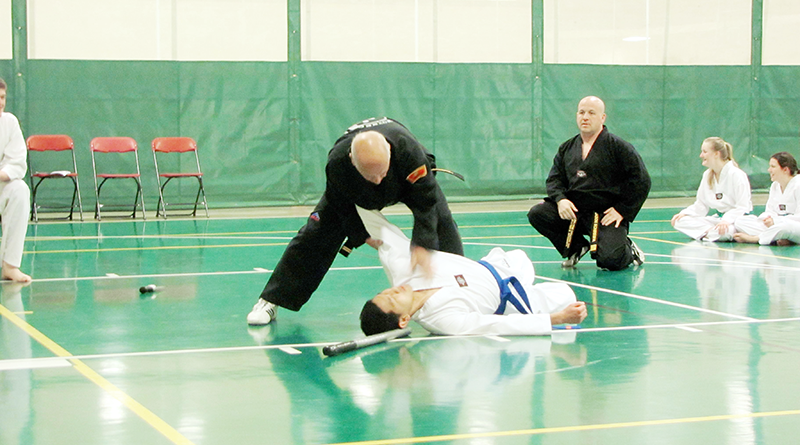 It’s taken over 10 years, but 74-year old Antonio Eppolito of DeWitt earned his fourth-degree black belt this spring. Now he is not only a doctor of education but a master of taekwondo.

“I’m going to stay with it, and if I can go further, fine,” Eppolito said. “It’s always been my goal to reach the fourth degree so that you’re considered a master.”

Eppolito said starting a journey into a martial art has a beginning, but it never has an ending. You can always learn more about the art.

He started his path to master with the taekwondo club at Le Moyne College at the age of 64, after he had been a professor of teacher preparation at the college for 14 years. He dabbled in karate in his younger years, but never really found the time to devote to the martial arts like he had wanted.

“I didn’t want to do it just piecemeal and show up when I could,” he said. “I did it full throttle.”

Eppolito found an able master at the club. Even though he’s a master himself now, the professor has a master who can continue to teach him at Le Moyne. Master Bruno Shirripa, 61, is a sixth-degree taekwondo black belt who founded the club in 1989.

“My master, he’s sixth degree,” Eppolito said. “He’s inspiring.  Anyone beyond the sixth degree is considered like a grand master. It goes all the way to 10. They’re gurus. These guys are amazing. All you have to do is touch them and — boom — they’ll put you down.”

But Eppolito made it clear that the martial arts are not about hurting people. It’s about being able to protect yourself and those you love and keeping active. The art aspect of taekwondo should not be underemphasized either. It joins the mind, body and spirit in a healthy activity.

The art had more practical beginnings, Eppolito explained. In ancient Korea, farmers and young military men were low on weapons. They needed to turn their bodies into a form of defense so they developed taekwondo.

Eppolito remains a professor emeritus at the college. He said learning the art has transformed his life in other ways too.

Similarly, his teaching knowledge has impacted his ability to learn the martial arts. You set a bar the student can reach and when the student reaches that bar you move on to another, he said.

He encourages others to give martial arts a try no matter their age. You don’t have to become a black belt to gain something from the experience, he said.

“You are going to be able to do certain things,” he said.  “Just being active. Not everyone has to reach a black belt. Just getting from white belt to yellow belt is a great thing for some people. That’s a lot of learning, a lot of training, a lot of repetitiveness, coordination, balance, and increase in stamina. You’re going to live a healthier lifestyle perhaps.”

Participants should check with their doctor before undertaking a new activity regimen, he said, but they shouldn’t hold themselves back if they want to try it.

The club at Le Moyne teaches faculty, staff and students. The students in particular inspire Eppolito. Some of them come out with both a bachelor’s degree and a black belt after four years.

“I really praise these students who take 20 hours of undergraduate work and can juggle their time,” he said.

Earning belts takes a lot of time, repetition and commitment. Eppolito did not gain his without some bumps along the way. He broke his toe going for his blue belt, cracked his head open while sparring, has had two operations on his knees and most recently couldn’t move his arm because of tennis elbow.

He has been active much of his life. He was into sports as a boy growing up on a Canastota potato farm and loved road running too. As an adult, he ran the first 15 Mountain Goat Run events in Syracuse.

Today, when he and his wife Nancy hold their annual family reunion, he gives his four kids and their kids a lesson in taekwondo.

“We all go to the Outer Banks in North Carolina for a week,” he said. “During that time, I teach them taekwondo. They have shirts and belts and all that.”

His family has been supportive of his efforts to become a master, Nancy said.

“He’s been really focused on this and it’s very, very important to him,” she said. “We’re all very proud that he pursued it and made this level. He really enjoys being involved with the young people at Le Moyne. It keeps him connected even though he retired, because he’s a man that really didn’t want to retire. Having to retire was a hard thing.”