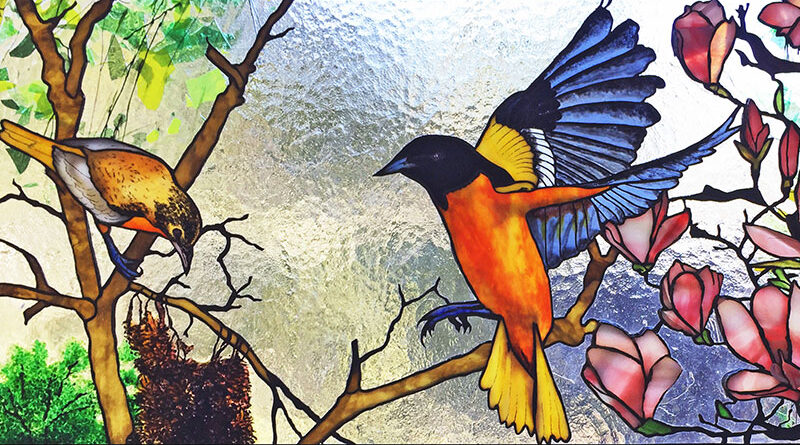 Growing up in Essex, England, he loved to draw. Today, Robert Oddy, who turns 77 in June, applies his talents to pieces of glass, crafting them into richly colored stained-glass artworks.

He put his interest in art aside as he prepared for college. He holds a bachelor’s degree in mathematics, a master’s in computing and a Ph.D. in information retrieval. He has worked as a computer programmer and taught college in England before accepting a position at Syracuse University’s School of Information Studies in the early 1980s. He resigned in 1997, as he has stated on his website robertoddy.com, to “devote myself to creating stained glass art.”

Within a couple of years of his arrival in Syracuse, he needed to find something to do at home, he said, and he started looking at stained glass, something he still finds a bit ironic.

“It’s funny because I was surrounded by stained glass in England, but it was much older stuff. Medieval, some of it, and that didn’t really interest me very much.”

What did pique his interest were works from 19th and early 20th centuries, and he decided to try the craft out.

He purchased a box of scrap glass, some tools and “just played with it,” he said.

Oddy is self-taught in stained glass making, and over the years has studied the techniques of some of the masters in the craft, including Louis Comfort Tiffany.

His studio, located in his home on the east side of Syracuse, is outfitted with two workbenches, a kiln, grinder, a ring saw, along with volumes of reference books. More than three dozen cubbies of various sizes line one wall, neatly filled with pieces of stained glass, and shelves line another wall, with assorted bottles of glass powder and chips.

Several samples of his work are displayed in some of his studio’s windows, and the sunlight pouring in makes the colors even more brilliant.

While he has made smaller pieces, such as lights and ornaments, he prefers working on windows and what he calls stand-alone panels. He said his work is more representational, as opposed to abstract, often working from photos to create his images. Since his work, most of which is commission-based, revolves around a client’s desires, he can do an extensive range of subject matter and styles, as his website, bertrobertoddy.com, proves.

Early on, he said, there were times when, upon the installation of the stained-glass window, the owner would host a party and invite people to view it. “We called them ‘window warmings,’” he said.

“I love the process itself. I enjoy cutting glass and shaping it,” he said.

Before cutting that first piece of glass, however, Oddy has noted that he sketches out his ideas, works with his clients to arrive at a final design, and decides on form and color. Selecting the glass is one of the most important aspects, he said. As he begins his work, he cuts the glass into various shapes, grinding down each piece to smooth out the edges and soldering pieces together with copper foil. He often adds texture with tiny glass pieces or powder.

Although the glass has degrees of contrast in its composition, Oddy will sometimes enhance shading by painting on the reverse side and then it fuses into the glass while in the kiln. This piece of equipment has been programmed to heat and cool the glass at the correct temperatures.

Oddy sees a connection between  his work in computer programming and what he does now in stained glass.

In the early years of his computing career, he explained, he worked on much simpler machines, on which programming was done at a detailed level.

“What I was doing,” he said, was “building some big-picture kind of thing out of the tiniest details. You have to have the ability to see how the little details would all come together in a big picture. That’s rather similar to making one of these. Bringing together all these details, but I’ve always got in my head the big picture.”

He estimated that he has done 60 to 70 pieces. But, he’s unable to really identify one that he prefers.

“I like different pieces for different reasons, and very often, the most recent one is the favorite,” he said.

However, there is one that is special titled “Symphoria,” which he created about nine years ago in honor of Syracuse’s orchestra.

An ardent supporter of the orchestra, Oddy was upset when the Syracuse Symphony Orchestra filed bankruptcy in 2011. The following year, some of the musicians regrouped and emerged as Symphoria. Oddy wanted to offer his help, so he approached the organization with the idea of making a piece to be raffled off.

“I was very distressed about the bankruptcy,” he said. “I wanted to give them whatever support I could. And I decided I can actually raise more money doing this raffle prize than I could possibly do by giving them the cash.”

In “Symphoria,” the central figure is a phoenix rising above a vintage scene of downtown Syracuse. As Oddy explains it, “The orchestra’s coming back. It’s coming to life again.”

With the ascending phoenix are a timpani, cello, trumpet and horn, a grand piano, and the scrolls from violins. In the bottom right-hand corner of the piece, which, at first glance might look like a fence, is actually a line from the score that Symphoria’s principal pops conductor Sean O’Laughlin wrote for the fanfare of the season. O’Laughlin gave Oddy the first page of the music prior to its debut.

Since Symphoria’s first season, Oddy has donated a prize, either a window or panel or something that the winner commissions, five times. Most recently, the raffle prizes have included other donations besides Oddy’s art, and Symphoria Pam Murchison estimates that he has helped the organization to raise about $100,000.

“I think that the fact that it’s a friend and a neighbor, a local person, just makes all the difference. Central New York is an incredibly rich region. People are very talented and very generous. Bob’s work is a great example of that,” Murchison said.

This season’s winner of the piece, titled “Florida,” has decided to give it back to Symphoria, so it could be displayed in a more public place for people to enjoy. Details as to the piece’s new home are being worked out now.

“The winner was so overwhelmed with Bob’s generosity and just really felt like having the piece somewhere where all Symphoria supporters can enjoy it and really take part in Bob’s generosity was the best way to share the piece,” Murchison said.