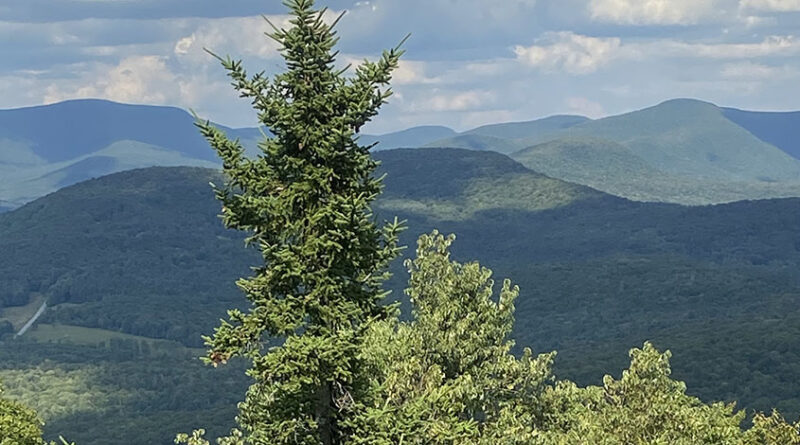 Here’s a recap of my 2022 hiking adventures. There were no long trips last year, because in April I suffered a spinal compression fracture (ouch). So backpacking was on hold in 2022. I have osteoporosis and recall no specific injury.

My friend and I planned to hike the Foothills Trail, 70 miles along the border of North and South Carolina, over eight days. Seven days of walking with a rest day in the middle.

On the drive down, my back started to hurt. I thought it was just stiff and sore from the long car ride.

After a night in a hotel, we parked our cars three hiking days apart. On that first day my back hurt more and more. I thought I’d feel better because I was up and moving.

In an amazing coincidence, I met up with two women that I had hiked and camped with in Maine’s 100 mile wilderness in 2021.

On the second day of hiking, my back hurt even worse. It was not better the third day, but there was a road crossing only one quarter mile beyond our campsite.

A road crossing with a picnic table on a warm and sunny day. So, I sat down and sent my friend ahead to get her car and come back to pick me up.

On another bright note, a backpacking couple soon came along. They were traveling in the opposite direction and had already crossed paths with my friend who filled them in on the situation. One of them was a massage therapist turned medical student now in his first year as a physiatry resident. Physiatry is a medical specialty also called physical medicine and rehabilitation.

He gave me a free back massage which truly felt good. I then went back to reading my Kindle until my friend picked me up.

We spent a “zero day” (no hiking) at a hotel in Seneca, South Carolina. I took my dog for a walk at nearby South Cove County Park on Lake Keowee, which was beautiful. As much pain as I was in, I was still able to appreciate how beautiful the area was.

I focused on the Catskill Fire towers first. I’d never been hiking in the Catskills previously, and geographically they are closer together than the Adirondack fire towers. I was able to finish those in two trips, one overnight and one two-night trip. Both times I stayed at a very nice state campground, Kenneth L. Wilson Campground. The campsites were spacious, the bathhouse with hot showers was clean, and there was even a dog park. I didn’t use the dog park as I figured my dogs had plenty of exercise hiking with me. 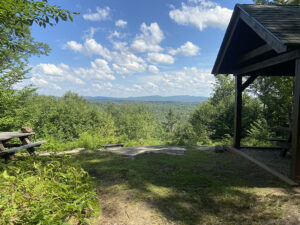 Compared to the Adirondacks, the Catskill Fire Towers had better roads — pretty much all were paved — but also more people. Although there was a lot of overlap in crowd size. But the proximity to New York City in general meant more crowds.  The busiest Catskill hike was Overlook Mountain, 4.6 miles, on a hot humid day. About ¾ of the way up are interesting ruins of an old hotel. As I trudged up in the heat, people kept telling me about a rattlesnake at the top. One woman even showed me a video, pinpointing exactly where it was. But by the time that I reached the top, it was gone. Tremper Mountain was the least crowded of the Catskill Fire Towers, on a September weekday. Alas I lost my glasses somewhere on that hike and had a long drive to find a store that sold “cheaters” so that I could read that night and the next day before returning home. 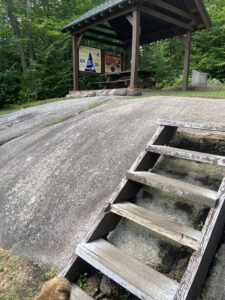 I re-hiked the only Adirondack Fire tower that I had previously visited, Cathedral Rock. This is a short easy hike located on the grounds of the New York State Ranger School, one of my alma maters. Although not difficult, be careful because there are some steep drop offs where people have been injured or killed in the past.

The toughest hike so far was Snowy Mountain, 7.8 miles round trip. I should have paid closer attention to the guidebook which states, “Many hikers consider this the hardest fire tower in all seasons.” The start is deceptively pleasant, but the final segment is straight up rock climbing. I was exhausted when I got back home, although by then my dogs were reenergized and ready to run around some more. 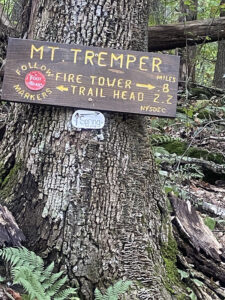 The longest hike: Woodhull Mountain, 15.2 miles. Also the least crowded with zero other hikers. The most crowded: Rondaxe (aka Bald) because it is very close to Old Forge and not very long, two miles. Biggest surprise: Stillwater Fire Tower. I mailed in a donation to the folks who maintain it and received a reply from the man who handles donations telling me that his daughter lives just a few houses down from me.

Here’s to hoping that I can visit nine more fire towers in 2023 and finish the fire tower challenge. 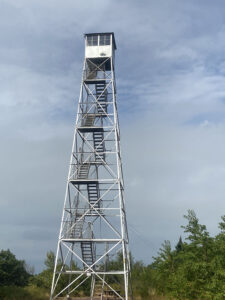