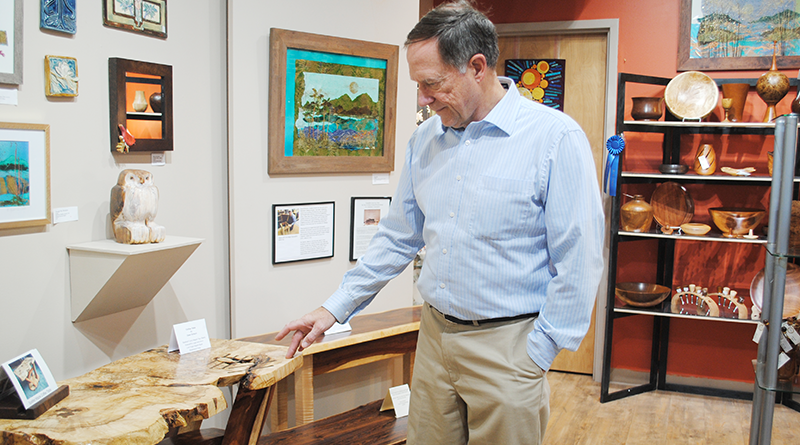 Meteorologist Dave Eichorn used to forecast the weather at WSYR NewsChannel 9; now he is all about creating pieces of furniture 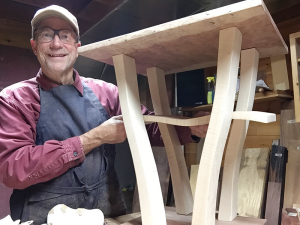 The forecast appears sunny for former meteorologist Dave Eichorn, who has taken his long-term interest in woodworking to a new level, creating and selling his furniture pieces in two Central New York shops, as well as through his website.

One bench sold after only about a week on display, and he has donated pieces to local nonprofits as well for their fundraising initiatives.

After leaving WSYR NewsChannel 9 in 2016, Eichorn took up a teaching post at SUNY College of Environmental Science and Forestry, but he’s leaving that job after this semester, enabling him to devote more time to his woodworking.

“It was a tough decision,” he said. “But I just decided, this is what I want to do.”

“This” is making furniture, something that the 64-year-old’s been doing for more than 30 years. He hasn’t sold any of the pieces until he left the television station.

Up until then, he’s crafted about one-third of the furniture in his home in Tully, which he shares with his wife, Gwen, and many pieces are in their place in the Adirondacks.

These pieces include coffee tables, a writing desk, and a bedroom set. His workshop is in the basement of his home.

A friend who collected various woods, both domestic and more exotic species from around the world, introduced Eichorn to the craft.

While his friend’s specialty was in finishing the woods, Eichorn wanted to do more.

So, he bought textbooks, practiced and admittedly made a lot of mistakes, but through it all, he learned how to do things correctly. He has become proficient at the skill of making mortises and tenons and then joining them together with glue instead of nails or screws.

Although his earlier work was a bit crude, his very first piece has stood the test of time. He had made a coffee table for his home in the early 1980s, and today it sits in his son’s apartment near Ithaca.

His work schedule at the television station allowed him the time to really hone some of his woodworking skills off hours. He would work at the station from about 1:30 p.m. and not return home until after midnight. So, for the first half of the day, while his family was not home and his friends were at work, he had time to woodwork.

Eichorn said now that he has learned some of the basics of proper joinery, he’s breaking out and experimenting.

“I am getting more artsy. I like the whole idea of contemporary rustic. It’s like for the rustic part of it, you let the work do the artwork for you. And the rest is up to me,” he said.

It’s the lines, or grain, and the color of the woods that resonate with Eichorn.

“One of the things I love in wood is the figure, the movement and the figure in the wood itself — what people call the grain. I love things with contours. I love maps. I love weather maps with contours,” Eichorn said.

He never stains his pieces, letting the wood speak for itself. He’ll often blend various species of wood — such as rosewood, birdseye maple, purple heart, and bubinga — and work the grain and color into unique furniture.

While much of the exotic wood he uses was acquired years ago, any new purchases are from sustainable or plantation grown sources, he noted on his website, eichornwoodworking.com. Sensitive to the rarity of some of his woods, very little of it goes to waste. He often takes long strips left from other projects, edge join them and glue them, thereby creating beautiful cutting boards.

Always a meteorologist at heart, though, his experience can help him in the woodworking processes.

Woods expand, contract and breathe, and can be impacted with big changes in weather, so with his knowledge, he can determine if certain parts of a project need to be completed sooner than later.

He’s self-taught until about two years ago, when he decided to attend a weeklong summer workshop at the Center for Furniture Craftsmanship in Maine.

“What I want to try to do is back up and get some formal training in the fundamentals. If for no other reason, I want to become reaffirmed that what I think I’m doing right, I actually am doing right. If I’m doing something wrong, I want to find out about it and correct it,” he said.

He’s been at this for decades, and one might think he’s mastered the art after all this time, but Eichorn continues to evolve.

“It never stops. I’m going backwards and forwards. I’m going forward stylistically and breaking out of square lines, getting into some contemporary form, which is a real struggle for me because I’m not really an artist. I can’t paint; I can’t sculpt. When I see something, and I like it, I know it.”

His efforts to grow as a woodcrafter have been enhanced too.

His furniture is featured at Cazenovia Artisans, a co-op in the heart of that village that showcases handcrafted art from painting to jewelry and pottery to soap making.

Although that shop has been around for about 17 years, Eichorn just became a member within the last 18 months, so in addition to creating and selling his furniture as a member of the co-op, he works shifts at the stop as well.

It’s been an experience that has only enhanced his creative process.

He easily engages with the customers that come in, but the other artisans and their work motivate him.

“It’s been a huge help. I see other people in here going through the same struggles as me, trying to evolve, and it gives me comfort. There’s a brethren spirit,” he said. “It’s inspiration in here. When I come, especially on days when it’s not terribly busy, I’m able to look around through the store and pick up snippets and ideas.

“You wouldn’t believe some of the design ideas I’ve gotten just from looking at wall art in here,” he added.