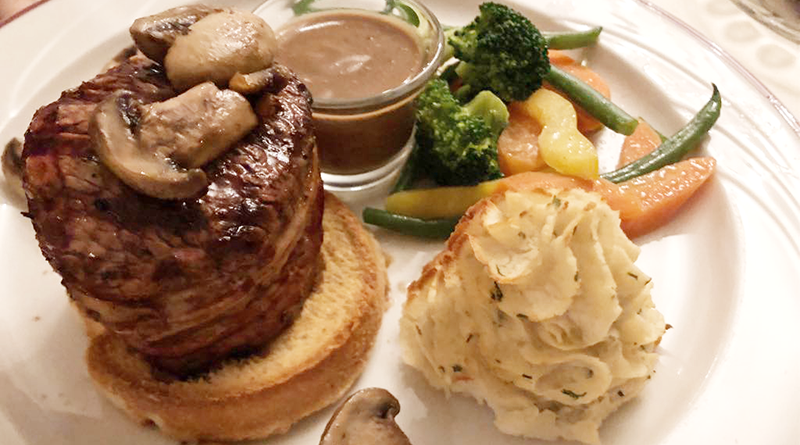 The Inn Between, which is located at 2290 W. Genesee Turnpike in Camillus, has a longstanding history of serving the community. The restaurant, which was founded in the early 1970s, is housed in an old farm house that dates back over 100 years.

According to The Inn Between’s website, the home belonged to Thomas Hill Munro. The property was part of a successful dairy farm, and Munro himself was a notable name and face throughout the community. There is a fair amount of history in a short read on the website. The farmhouse is even famous for hosting one of the earliest meetings for the Republican Party, which evolved from the Free Soil Party.

The Inn Between maintains the homelike aesthetic. A complimentary coat check is available to stow the winter layers. The soft lighting is romantic and warm. We were seated immediately after confirming our reservation to a table dressed in white linen, topped with red napkins and clean silverware. Our server John was a gregarious gent, with a big personality and smoky laugh. He treated us well throughout the night. When he brought the half-bottle order of Chianti ($12.95) to the table, he offered the first sip to my partner for approval.

To kick the meal off, we opted for the lobster bisque and clams casino (both at $7.95). The bisque came out as the description read on the menu. The broth was the very definition of creamy and presented a hint of sherry. The pieces of lobster were also present, in an appropriate amount.

The clams casino may have edged out the bisque as our favorite starter of the two. The clams were topped with crispy bits of bacon and a crumb topping. The amount of pepper and salt were balanced, and the latter really pulled out the flavor. The clams were also not gritty.

Before our entrees came out, we were served the complimentary bread, homemade butter and salads. The bread consisted of a few rolls — plain, poppy seed, and asiago-topped. I enjoy asiago cheese, but approach it carefully, as if it were a fierce animal. The cheese baked onto the roll was a perfect amount. The date bread was also a notable option, too, which was presented as few small squares.

My partner opted for the salad with lemon poppy seed dressing, which coated mixed greens and an array of vegetable staples. I chose the Caesar salad with E. coli-free, crispy romaine lettuce. The dressing was flavorful and creamy. As simple as the salads were, they did right. The ingredients were fresh and colorful. Apparently the Caesar was not included with my entrée, and I was charged $3.95.

Choosing the entrees was the difficult part. We wanted to pick one from each column — the classics and the entrees. Although the names of the sections weren’t creative, the options were all appealing enough to be talked about. The crispy roast duckling ($32.95) was picked from the classic section and the filet mignon ($36.95) from on the other was ordered.

The prices of the entrees are on the medium-high end for Central New York eateries. Frankly, the tags weren’t intimidating. The Inn Between name precedes itself, so newcomers may have an idea of what to expect when it comes to finer dining.

Cooking the thick cut of fillet mignon can be a challenging task. Although the outer section of the cut of meat was cooked pretty well, the rest of the steak was cooked as ordered. It was topped with good ol’ sautéed mushrooms and The Inn Between’s house mustard sauce. The flavor was pretty spectacular and balanced. It’s a solid entrée staple for many restaurants, and this restaurant executed their version well.

The portion of duck was a generous one. The half-duck was served with a heap of mashed potatoes and pile of veggies. The potatoes were swirled high and torched for a crispy outside. The fresh spud side had a great hint of garlic, which won my attention.

The duck sat atop sage stuffing and had a drizzle of fruit sauce to top it. Unfortunately, the majority of the quacker itself was dry. It wasn’t Griswold-Christmas-turkey dry — there were amazing meaty parts — but my jaw and chompers got a good workout.

The saving graces were the sauce and the sage stuffing, especially the latter. I personally want to replicate it. The sauce did hide the drier aspects, but the skin was too far gone, but getting a forkful of duck and dressing paired well and lessened the severity of this critique.

Although our stomachs were satisfied, we decided to end the meal on a high note with dessert. Throughout the evening our eyes were teased with an array of sweet treats. We chose the elaborate-looking dessert with whipped cream and fresh strawberries between slices of crispy, almond-riddled pastry ($8.95) that flaked when cut into; a cup of decaf coffee ($2.75) helped wash it down.

We chose wisely. The homemade dessert was light enough for us to not feel like we overate, although we did overeat. Before the tip, the bill came to $114.40.

Dinner at The Inn Between definitely lives up the definition of a dining experience. There’s no question about its integrity and longevity. The restaurant presents a satisfying meal, and encourages patrons to enjoy the food and the company of others, whether it’s a date or an evening out with friends or family.