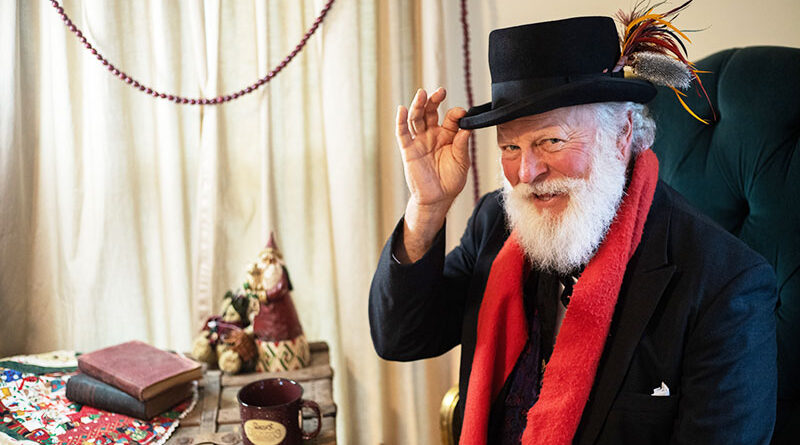 It’s beginning to feel a lot like Christmas in Skaneateles

Jim Greene, producing director of “A Dickens Christmas,” a holiday improv show held in the village of Skaneateles, finds it to be a festive atmosphere and he sees a real bond between his cast and the audiences.

“There’s a real connection there. That’s kinda the magic of the whole thing. Simply, people looking you in the eye and saying ‘Happy Christmas. How are you doing?’ It’s a warm, friendly time,” he said.

He qualified that statement, joking that while the mood might be warm, the temperature often isn’t. Since the show is outside and runs on weekends between Thanksgiving and Christmas, it can get really cold.

To combat the more chilly days, Greene, also known during this time as Charles Dickens, and his cast dress in layers underneath their costumes. After all, the show must go on.

The performances have become a holiday tradition and can draw as many as 5,000 visitors to the area each weekend, according to the Skaneateles Chamber of Commerce.

His company, Scartlett Rat Entertainment, has been producing this classic in the village since 2001; even during the COVID-19 pandemic last year, the cast and crew were able to do a virtual version, filming in the village before the stores opened and very few people were around.

For those not familiar with Greene’s production, it is not a retelling of Charles Dickens’ classic. Instead, it’s a creation of Greene’s imagination mixed in with pieces of history. The production is set in 1842, a year before the iconic author wrote “A Christmas Carol.” Dickens/Greene and Queen Victoria are touring Skaneateles and the townspeople are planning a big festival to mark the occasion. According to history, Dickens made a visit to the United States in 1842, albeit without the Queen and most likely not to Skaneateles itself. But it makes for a great premise that has entertained visitors to the town for decades.

There are anywhere between 50 to 70 actors in the cast who play some of the legendary characters in the book — Ebenezer Scrooge, Bob Cratchit, Jacob Marley, the ghost of Christmas past, Mr. Fezziwig, for example. And Greene sprinkles in characters from other Dickens’ stories, like Fagan and the Artful Dodger, from Oliver Twist.

Other cast members play townspeople from the era and in the past, Greene said, they’ve had President Fillmore, canal boat captains, and members of the McLaughlin family, a well-known Skaneateles family who had owned a woolen mill and a teasel factory. As Dickens, Greene meanders the village during the production, encountering various persons along the way, and from the snippets of conversation he has and overhears, he decides that it’ll make a great story.

At 2 p.m. each day of the show, Dickens/Greene gathers the audience around the gazebo in Clift Park, on the edge of Skaneateles Lake, for the midday revels, during which the group sings “The Twelve Days of Christmas.” Whoever sings the song the best wins a silver teasel, which is an actual teasel painted silver by Greene and his wife, Tracey, the company’s costume director. He said that there have been some teasel recipients to return 10 years later, wearing their silver teasel. Teasels were a big cash crop in the area that time and were used in carding wool, a process that separates and prepares wool for spinning.

To prepare for his Dickens’ characters and the rest of the cast, Greene spends a good part of November rereading “A Christmas Carol” and watching classic film versions of the story.

When not in Skaneateles in the weeks leading up to Christmas, Greene can be seen at various Renaissance festivals in various locales, including the one in Sterling, as well as Pennsylvania and Florida, where he got his start in this craft about 40 years ago. It was a start that happened by accident, he said.

While house-sitting in St. Petersburg, Florida, a friend, who was working for a Renaissance festival there, was hosting a party for co-workers and she invited Greene to attend. She told him that the festival was looking for fishmongers, rat catchers and other characters.

“I thought ‘I can be a rat catcher.’ I don’t know why I thought that,” he recalled. But he went to the party, was invited to audition and got the gig.

He continues to play that character in the Sterling Festival, doing four shows a day on stage and then mingling with the faire’s visitors.

The rat catcher character has also figured into the name of his company. In this role, he created a game he plays with guests; the prize is a crimson rat. But since Scarlett is Tracey’s middle name and her maternal family name, it was suggested he use that instead of crimson.

While he’s been doing Renaissance festivals for four decades, the 65-year-old has apparently been entertaining for years prior.

“I’ve always been a ham,” he said. “When I was in fourth grade, I was doing Jonathan Winters routines.”

Greene grew up in Florida and worked for Walt Disney World for more than 10 years, but he and Tracey, also a Floridian, and their family left Orlando, opting to live in a smaller town. Having worked at Sterling and with friends in the Trumansburg area, they were familiar with Upstate New York. So, they moved to the area in 1999, settling in Dryden. He had worked on “A Dickens Christmas” for two years before being invited to take it over as its producer in 2001.

And it would seem that Greene and his alter-ego Dickens have at least one thing in common — their love of a laugh. As Greene noted, “I’ve always tried to be funny and perform that way,” he said. “I’m big on laughing.”

Coincidently, Dickens wrote in “A Christmas Carol:” “There is nothing in the world so irresistibly contagious as laughter and good humour.”

Photo: The performance of “A Dickens Christmas,” has become a holiday tradition in Skaneateles and can draw as many as 5,000 visitors to the area each weekend, according to the Skaneateles Chamber of Commerce. Jim Greene plays the role of Charles Dickens. Photo Credit: Jim Green