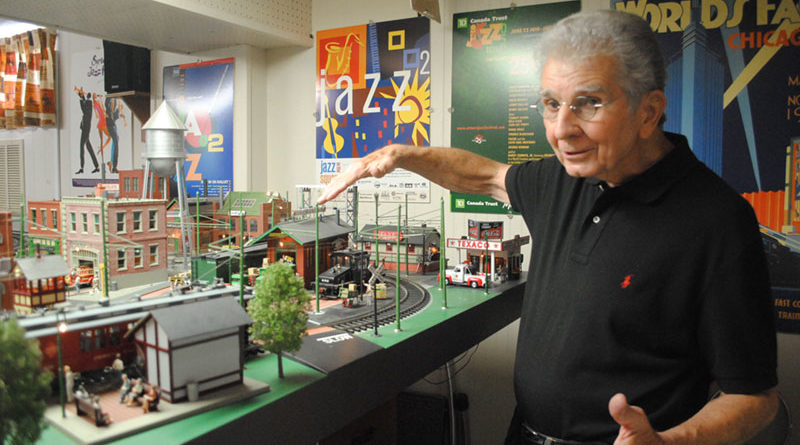 Whether it’s gardening or building his model railroad display, Ed Bernat has found his creative outlets.

The neatly trimmed greenery and red geraniums in the front of Ed and Angela Bernat’s home in Westvale just hints at the oasis the couple has created in their back yard.

Entering this space is like walking into a small, magical garden awash in color, from the geraniums to the crimson coleus to the pink-and-white hydrangea tree to bright planters. A gazebo anchors the corner of the yard, which features miniature, perfectly manicured trees and meandering walkways.

There are little surprises at every bend, whether it’s one of the many birdhouses that Ed built or a quirky metal chicken figurine. He constructed the little shed in the back from leftover siding on their house. The crane figures in the yard have been christened George, Kramer and Elaine, in honor of one of the couple’s favorite TV shows, “Seinfeld.”

When it was first designed, Ed said that he wasn’t fond of the curving walkways. The computer programmer in him wanted straight lines, he said, but he deferred to the designer. But Ed has since taken over and it’s become his design. He takes care of all of the maintenance and upgrading these days, especially since his retirement in 1992.

To say that Ed is immersed in gardening would be an understatement. The 83-year-old still climbs the ladders so he can do precision trimming, even utilizing a gauge he built for himself.

“If there’s more than one of the same species, I’d like them to be all the same,” Ed said. And he still gets on his knees to do the lawn trimming by hand — there is no electric trimmer for him.

“I do everything by hand to stay in condition,” Ed said.

Their work in the yard has paid off as the Bernats’ yard was included on this past summer’s Westvale Garden Tour, and it was featured on the cover of some of the tour’s promotional materials.

But yet, the space is a continual work in progress for Ed.

“He’s never happy,” Angela joked. “He’s always looking for one leaf that might be dying so he can have an excuse to pull it out and plant something in its place.”

And every year, something will die, triggering them to look into planting something else the following season.

Ed does his horticultural homework, always researching the perennials and annuals, his wife said.

They find inspiration wandering the aisles of some of their favorite gardening shops, like Chuck Hafner’s Farmers Market & Garden Center, or simply by strolling through their neighborhood.

“We’re big walkers, so we notice shrubs and plantings wherever we are,” Angela said.

While gardening has been an avocation for Ed for nearly 30 years, his passion for collecting model trains has been going on for about a half-century. It all started when he went to an auction in his hometown of Fulton in the early 1970s.

The interest has taken the couple all over the east coast to various train shows, and even the day after their wedding in 1975, they were in Rochester for another train exhibit.

A wall in their den has shelves of model locomotives and cars on display, even a rare pink one. Pink locomotives, the couple explained, were introduced into the marketplace in the 1950s to interest girls, but when sales hadn’t gone as hoped, many storekeepers painted them black, leaving only a few of the original ones in circulation today.

Nearly half their basement is home to a model train display that Ed lovingly calls “Silly City.”

While Ed might refer to it as Silly City, the layout is anything but silly. It’s is a testament to Ed’s imagination, sense of humor and patience.

One could easily spend hours looking at it from various angles and always see something different.

Being that Ed hails from Fulton, the display, while not laid out like the actual city, has replicas of buildings from his boyhood that conjure up fond memories for him.

In his younger years, for example, he recalled waiting anxiously for the trucks to deliver goods that his mother had ordered from Spiegel’s, Montgomery Ward and Sears, so there’s a railway express truck in this “city,” with folks waiting nearby for their packages. And he fondly remembers hanging with friends at the Texaco gas station, so there’s a gas station.

Ed worked at Sealright [now Huhtamaki] in Fulton for a while, so he’s made room in one of the corners for a Sealright plant, and adjacent to the plant is the Victory Grill, one of Ed’s hangouts back in the day. There’s also a chocolate plant, which had once bore the name Nestle. But when the company pulled out of Fulton, down came the sign on the building in “Silly City.”

Ed, of course, has taken some liberties in constructing his Silly City. While there might not be a Talbot’s shop in the actual city of Fulton, there is one in Ed’s town. It’s actually a nod to Angela, since Talbot’s is one of her favorite shops. And because his wife enjoys reading, there is, of course, a library.  She also likes ice cream, so there’s a scene with a couple buying a small girl an ice cream cone.

And like any bustling city, there has to be some utility work going on. While driving near the Palace Theater in Syracuse’s Eastwood neighborhood one day, Ed noticed a guy coming out of a manhole, having completed his task underground. This was enough of an inspiration for Ed. He went home, and out front of his “city’s” movie house, he drilled a hole in the wood, and placed a guy just coming out of the hole, with another one standing overhead, and a telephone company truck nearby.

The town is fully electrified, and he’s even fashioned his own streetlights and many of the signs on the various buildings.

Unlike his garden, the Silly City is a finished project, one reason being there’s little room left in the basement for any expansion.

“Now it’s a matter of dusting without breaking something,” he said.

Photo: Nearly half Ed Bernat’s basement in Westvale is home to a model train display that he lovingly calls “Silly City.” The layout is anything but silly. It’s is a testament to Bernat’s imagination, sense of humor and patience.