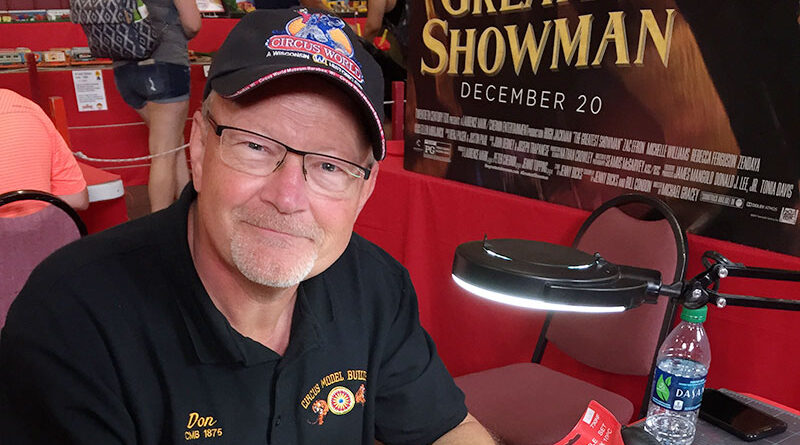 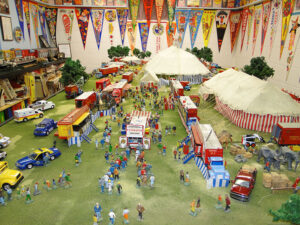 Clowns, feats of skill, exotic animals, rousing brass band music—what’s there not to like about the circus?

For most of his 65 years, Don Kowell of Syracuse has been a fan of the big top and everything under it. When Kowell was a child, his father, Richard Kowell, gave him a Corgi diecast model of a Chipperfield circus truck. A born builder and tinkerer, Kowell fashioned accessories for his circus truck and his lifelong passion began.

Vice president of business development at Granger Construction in East Syracuse, Kowell has remained fascinated by circuses ever since. He and his wife, Barbara, visit numerous circuses nationwide every year, totaling 22 in 2019.

As a youngster, Kowell and his family visited several circuses each year. Kowell paid attention to the details of the circus equipment and performers and tried to replicate them at home.

While a teen, Kowell’s first full circus model was on display at the New York State Fair, and numerous stores and banks. That led to the Ringling Bros. and Barnum & Bailey Circus tapping him to serve as honorary ringmaster while they showed locally. Kowell was 17. 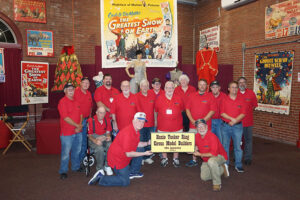 “I will never forget that moment,” Kowell said.

He continued to build models, encouraged by the camaraderie of the Circus Historical Society, Circus Fans of America and Circus Model Builders to which he belongs. His mother, Mary, helped him by making tents for his circuses.

Although Kowell took a break from model building during college, when he and Barbara built a house in 1978, he picked it up again.

Barbara supports his hobby by compiling scrapbooks of their circus adventures together; which started on their first date.

Comprised of 16 members, the Hoxie Tucker Ring spends weeks setting up 20 model circuses in the Bistro Room in the Arts and Home Building at the New York State Fair, as well as appearances at other venues. Their displays also feature authentic circus promotional posters and artifacts from the 1930s to the 1970s. 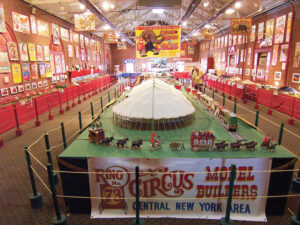 Many of these items are from Kowell’s personal collection of thousands of circus items, from ephemera to life-sized cutouts.

After The Greatest Showman (2017) movie debuted, the club’s exhibit included references to the movie, which paid homage to P.T. Barnum of circus fame. A young visitor assumed that Kowell was involved with the flick and asked him which song was his favorite of all the songs he had sung in the movie.

“I know I sure don’t look like Hugh Jackman,” he said about the movie’s star who portrayed Barnum.

Through the club’s exhibits, he wants the public to understand the modeling hobby better.

“The important thing I explain to people is we’re like artists,” he said. “You can make a model of something as detailed or simple as you want. The detail brings it alive. Each of us has a different interest in eras or logistics. Some build just model trains, all handmade and hand-painted. Some like myself build a complete miniature circus. Some build dioramas. It depends on your time and space. If you see our shows, no two models are the same.”

As some older model builders pass away, their lifetime of work on circus models is not always appreciated by their families, some of whom discard their models. Kowell feels saddened by that kind of disregard for the skill and craftsmanship exhibited in models. 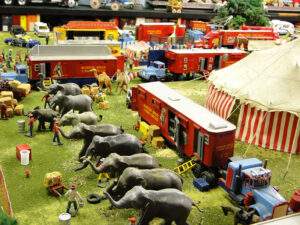 “Most guys who build things like dollhouses, model trains or ships, it takes skill that you have to have the aptitude and interest,” Kowell said. “I meet people who are 50 or 60 and they say, ‘I couldn’t do that.’ But if you can build a box, with some basic tools, you can build anything. You start simple and your hobby grows.”

Kowell took his own children, Lindsay, David and Stephanie, to numerous circuses throughout the years, traveling in their motorhome.

“All of them appreciate circus, growing up with it,” Kowell said. “None are into modeling but that is OK. But they still appreciate going to circuses with us once in a while.”

Kowell and his wife have attended circus enthusiast conventions nationwide.

“Over the years, my wife and I have developed lifelong friendships with circus folks, including ringmasters, performers and animal people,” he said.

Photo: Don Kowell of Syracuse works on one of his circus models. He helped start a Circus Model Builders chapter—known as a “ring”—in Liverpool.