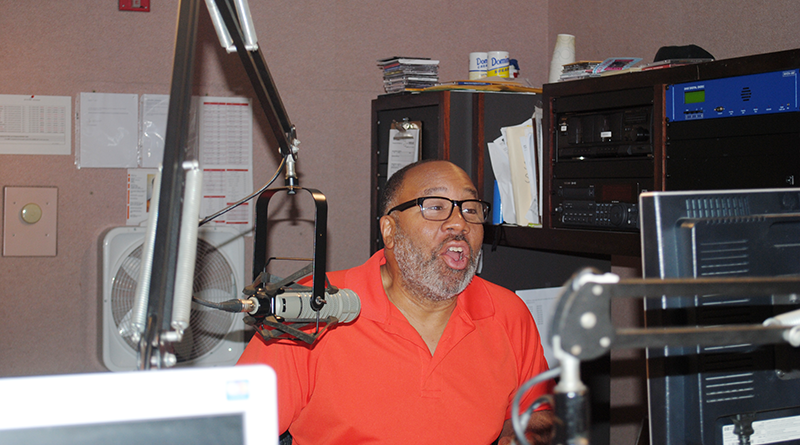 George Kilpatrick Jr.’s career path has gone in several different directions since he graduated from Syracuse University in 1981.

But regardless of the direction, Kilpatrick has strived to remain true to his message and his mission — to raise community awareness about issues, to motivate individuals, and to be as he puts it, a voice for the underrepresented.

For more than 30 years, Kilpatrick Jr., 59, has worked to bring attention to issues of importance to the Syracuse area and the nation and to inspire people, whether on his various radio and television programs or through his jobs in banking, with the city of Syracuse or the former Rural Metro ambulance company.

He has hosted and produced shows on stations owned by the former Clear Channel Communications, now iHeartMedia, and on cable TV, the former WTVH, and WCNY.

Kilpatrick has a radio program that, while broadcast here in Syracuse, can be heard in several markets throughout the country, and he works fulltime as the men’s outreach coordinator with Vera House.

His “George Kilpatrick Inspiration for the Nation” has been on the air since 2004, broadcasting live on Sunday mornings at 9 a.m. on Power620, an iHeartMedia station.

The African-American Public Radio Consortium has picked up the show and makes it available for download to content providers.

“When we created that show, the message was that our success, especially from the African- American community perspective, is not a fluke, that success runs in our race; it runs in our DNA,” Kilpatrick said.

“We celebrate people we feel good about, and recognize positive achievements of African-Americans from all walks of life, or people of color, bringing you a message of uplift, inspiration, hope, success, and achievement,” he said.

He recalled sitting with a friend in Barnes & Noble during the early days of the radio program. His friend asked Kilpatrick if he thought he would be able to do this kind of program week after week.

Being on the air for 14 years is proof that he has been able to do exactly this kind of program.

“The people you’re going to meet on this show are successful, doing amazing things and we’re here to tell you their story. We amplify those voices that often don’t get heard or seen,” he said.

“My goal is after you’ve finished hearing that show you feel like you’re ready to do something or you’ve heard something that’s going to fuel you. That’s what my aim has been,” he said.

His interviewees have included such celebrities as singer Patti LaBelle and basketball legend Kareem Abdul-Jabbar, and others who might be considered to be more motivational speakers, including Mel Tiller, Dr. Willie Jolley, motivational speaker and author of several books including “A Setback is a Setup for a Comeback; and entrepreneur George Fraser.

But the person he most wants to interview that he has been unable to interview yet is [American media proprietor] Oprah Winfrey.

“I always wanted to talk to Oprah. I feel like there would be a nice connection there,” he said.

While he has had the opportunity to meet the famous talk show host several years ago when she visited Syracuse, and had a “selfie” taken with her, Kilpatrick has been unable to line her up for his radio program.

However, the look in his eye and that trademarke Kilpatrick smile he flashed while telling this story indicates he will succeed in getting Winfrey on his show.

But sometimes, Kilpatrick finds himself inspired as being the one inspired.

Some remarks made recently by athlete Colin Kaepernick “stirred my soul,” Kilpatrick said.

“‘Love is at the root of our resistance,’” he said, quoting Kaepernick, who had included this statement in receiving an Amnesty International award recently.

“It gave me the inspiration and a way to do the work that I am doing in my role to uplift the community,” Kilpatrick said. “I don’t like the idea that whenever we talk about communities of color, it’s always from the deficit.”

Although Kilpatrick is on the Vera House staff, his affiliation with the local agency goes back quite a few years.

While hosting and producing some programs at WCNY, he would often have guests on his programs from Vera House to discuss domestic abuse and sexual assault.

“I always felt like this was an issue I care about,” he said. “Whatever I could do to amplify the mission and the voice of Vera House around domestic violence and sexual assault in the community, I would do it.”

A chance meeting in Wegmans one day in 2009 between Vera House Executive Director Randi Bregman and Kilpatrick presented an opportunity for him to become even more involved. Bregman asked Kilpatrick if he would be the honorary chairman of its white ribbon campaign. After questioning whether he was worthy of this and some discussion with his family, he stepped in and took on the project. Then in 2012, Kilpatrick became Vera House’s men’s outreach coordinator.

One of the initiatives he’s been involved with in that position is the development of Men of Strength Clubs in five city schools — Clary, Danforth, and Grant middle schools, Corcoran High School, and the Public Service Leadership Academy at Fowler.

Kilpatrick has been involved in the training of club facilitators and in mentoring one of the clubs himself. He noted, with some surprise, that he has learned some life lessons from his work with the young men and other mentors.

“One of the things I learned in that process, if we want them to have healthy relationships, then we have to model that for them,” he said. “Instead of, ‘What do I need you to do?’ it is, ‘What do you need from me?’ What a way to think! We go into situations where we’re working with individuals and we’re trying to give them something that we hope will carry with them for the rest of their lives, or even next week, or even in the next hour.

“What do they need from me to make that happen? How do we encourage the leadership that we know is inside of them to unfold? That’s part of what this work is,” he noted.

Last January, as preparations were being made for Vera House’s annual white ribbon campaign, Kilpatrick went on his webpage, georgekilpatrick.com, and asked 1,000 men to give $10 each and come to the walk.

“We didn’t come close,” he said, but they got the word out and he was excited about that.

With the #metoo movement and today’s headlines, Kilpatrick shared his thoughts on its impact on the work at Vera House.

“From our perspective, it’s what we’ve always known. We see it as an opportunity to allow other survivors to come forward and feel that their truth will be honored, and they’re not going to be told that their voices don’t matter and that their truth isn’t valued. That’s the starting point,” he said.

“We’re ready to support and help all survivors who are ready to share when they’re ready. It’s when you’re ready,” he said.

“When someone shares their truth and bears their soul in a public way, to say this is what happened to me and I’m still standing here, there’s something so powerful and moving about that that I cannot describe. For those that do it, I’m in awe,” he said.

Upon graduating from S.U., Kilpatrick stayed in Syracuse and went into banking.

He eventually worked for the city of Syracuse as the director of minority affairs. He left in 1994 and went to graduate school at the Maxwell School of Public Administration at S.U.

From there he became the new market development manager for the former Rural Metro, and then went full-time at WCNY to host and produce a number of its shows.

By the time he got to WCNY, he was no stranger to local media. He had programs on several of the former Clear Channel stations and WOLF.

He had substituted on a program called “Insight” and had a show on cable that he produced called “Syracuse Soul.” At the former WTVH, he was the host of “Straight to the Source,” which was produced by the Human Rights Commission.

He hosted a cable show with former Mayor Tom Young called “City Hall Update,” and he had also done some work at WCNY on a part-time basis.

One of the producers at WCNY was leaving, and management there asked if he would be interested. After some discussion with his wife, Gloria, and their four children, he took the job.

He would go on to host and produce “Our CNY,” “Central Issues,” and “Access with George Kilpatrick.”

When Kilpatrick started in media, it was as a hobby. His freshman roommate at S.U. was very involved in broadcasting and knew Kilpatrick had a little bit of an interest in it too.

Before long, Kilpatrick was doing a number of programs on WAER, a radio station at S.U., including “Black Expressions Week,” “Third World News,” and a public affairs show titled, “Head East.”

“I would work with people like Butch Charles and Kenny Dees and others who had been in broadcasting. That’s how I got the bug,” he recalled. “That was sort of my entrance into public affairs. It was our way of giving information to people of color on campus,” he said.

Charles and Dees are well-known personalities in local media.

What does the future hold?

He attributes his passion and community involvement in part to his parents. His mother, Ada Kilpatrick, still lives in The Bronx, where Kilpatrick was raised, and he likens her to Mother Teresa. Of his father, George Sr., his son said, “I think my activism is from his side. If he saw something wrong, he was writing a letter.”

George Sr. passed away about 19 years ago.

In addition to his radio program and responsibilities with Vera House, Kilpatrick is active in his church, Bethany Baptist. He has worked on projects with the Gifford Foundation and the Central New York Community Foundation that assist nonprofits, and he is frequently called upon to emcee and host various events.

Aside from trying to get an interview with OprahWinfrey, what’s ahead for Kilpatrick?

“Whatever I’m doing and no matter where I’m at, I want to help shine the light on people and the work that they’re doing that empowers and encourages others,” he said.

“I’m not putting any limits on what’s going to happen for me. I’m going to keep my eyes open, and I’m going to keep working for justice, working using the power I have through my voice in media to tell the stories because I believe that our nation right now needs stories, truth-tellers. More than ever we need truth-tellers,” he noted.