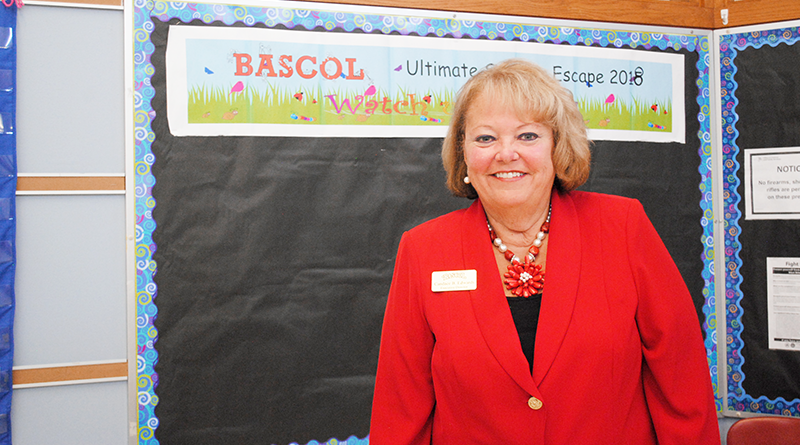 Candace Edwards has combined her enthusiasm for education and entrepreneurship to forge a career that has spanned nearly four decades.

That includes work as a teacher, school administrator, franchise owner of a local Huntington Learning Center, and founder and co-founder of two childcare programs.

While she refers to herself as an educator and an entrepreneur, one might also consider her a juggler, since at times she has to balance the responsibilities of more than one of these jobs at a time.

The 66-year-old mother of two and grandmother of six is the executive director of Before and After School Child Care on Location, Inc., —known as BASCOL, an organization that she helped to found 26 years ago.

“I am very fortunate in my lifetime to always have had a position that I’m passionate about, and education is my definite passion,” she said.

BASCOL got its start, Edwards said, at a time when she was overseeing the Little Learners, another childcare program she started in 1979. She said a family from Liverpool had been bringing their children to the Little Learners Center on Kasson Road, Syracuse, and the mother had asked her if a similar program could be established in the Liverpool area.

So, they assembled some key stakeholders and families from the Liverpool area and a formed a task force. Out of that, Edwards said, came BASCOL.

According to BASCOL’s website, it was incorporated in 1992 and started a pilot program in September of that year with 13 children. In December of that same year, two more sites opened in the Liverpool district.

With its corporate offices in Liverpool, BASCOL has approximately 600 students at its 19 locations in eight different school districts throughout Onondaga and Oswego counties.

Edwards has remained on the BASCOL board since the organization’s inception.

Before starting Little Learners and BASCOL, however, Edwards was already in the education field. Graduating from SUNY Geneseo in 1974, she earned her master’s degree in education from SUNY Oswego in 1979.

She would go on to work as a teacher or administrator in various school districts in the Central New York area, including Central Square, Baldwinsville, Mexico, and Cincinnatus. She and some family members created the Little Learners program to fill a need that Edwards saw for childcare.

It was when she began teaching that she saw a need for more day care programs, and Little Learners was born in 1979. At that time, she said there were only six childcare centers in Onondaga County.

At the time, she was a single, working parent. Her oldest, Elizabeth, was 1, and Jennifer was about to be born.

“As a new mom, you don’t want to put your kid with just anybody. I’m an educator and I wanted to develop the best program out there for young children. So Little Learners came about,” she said.

Members of her family, including her mother and sister-in-law, helped to run the program.

“Back in the early years, it was a family affair and it was so much fun,” she said.

Word soon spread to other districts, and Edwards would design six freestanding buildings to house the growing program before selling the business in 1994 to Childtime.

After selling Little Learners and retiring from school administration, the educator in her was still looking to stay involved in the field. As a result, she became the franchise owner of the Huntington Learning Center in Clay in 2005.

A few years later, BASCOL’s board, of which Edwards was still a member, was looking for a new executive director, and its members asked her if she would be interested.

Edwards, who admitted to never being able to say no, agreed to take on the job as director at BASCOL while still at Huntington. She had several years left on her contract with Huntington.

She is in her eighth year running BASCOL, and over those years, the program has grown, adding a couple more sites to its roster. She’s brought some of her entrepreneurial marketing skills in as well. The BASCOL sites are located in existing school buildings and it was important, Edwards thought, to be able to differentiate BASCOL staff from the school staff.

Edwards also believed in the need for name badges. She found that staff would often forget to take the badges off when they left work, and if running errands after work, people would see that they worked for BASCOL and inquire about it.

“You want your employees proud enough to be able to say, ‘Yes, I work for BASCOL, and it’s a fantastic program. We might not be the biggest, but we have a long-standing reputation,’” she noted.

Edwards does like to stay busy, that’s for sure.

She is actively involved in Zonta International and the General Federation of Women’s Clubs, both of which help her to put into action her belief in community service.

“We’re mentoring these young women,” she said. “It starts at a young age as we get them to realize how it’s important to give back to your community and continue on when you get older.”

“If you instill an idea in a younger person and they take hold of that idea, it will change their perspective on things for the rest of their life,” she added.

Giving back is not just some words for Edwards.  To take from an old adage, she practices what she preaches.

Working with BASCOL and her various civic organizations, she collects 8,000 boxes of Jell-O that go into the food baskets distributed through the Salvation Army, Rescue Mission, and Food Bank of CNY at holiday time.

During the holiday season of 2017, there was a story on a local television station about a Central New York woman named Candace Edwards who had turned her entire home into a Christmas fantasy land with more than 100 trees that she decorated herself.

When asked if she was the Christmas tree lady, Edwards laughed and said, “I’m the crazy Christmas Tree lady.”

Maybe not crazy, but she is definitely the Christmas tree lady. She featured 113 trees in her Baldwinsville home in 2017, a home she designed about 20 years ago. She admits when she was making plans for the house, she took into consideration having enough room for her trees.

However, at that time, she hadn’t really planned on doing over 100 of them.

Over the years, her grandchildren inspired ideas for the trees, such as featuring beloved Disney characters and the Abominable Snowman.

Then in 2016, she said, there was a story on a local television station about a different family that had 100 trees.

“Didn’t all my friends start calling me asking, ‘You’re going to let somebody else get 100 trees?’” she said.

Because last year marked the 20th anniversary of her home, she did an open house. The Syracuse Federation of Women’s Club used it as a fundraiser, with the monies going to benefit the McMahon/Ryan Child Advocacy Center.

Several years ago, in 2012, she was asked to decorate the 16½-foot tree that stood in the National General Women’s Club in Washington, D.C.

She said perseverance, positivity, and passion drive her work.

In a career that’s been as varied as hers, she undoubtedly has encountered some challenges.  But she takes a positive approach and regards them as opportunities.

“I have always looked at challenges as opportunities to grow and learn something new or from a new angle,” she noted. “With a positive attitude you can achieve anything. Perseverance is my middle name.”

“It’s made me grow and just become more passionate about everything I do.”