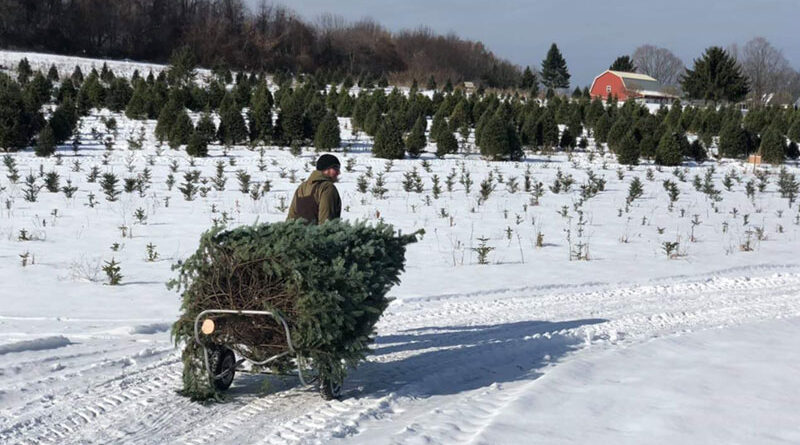 What began as a business to help pay for her children’s college tuition grew to become a Christmas tree destination for Central New Yorkers.

Cathy Jo Brown, now 72, started the farm with her husband, Robert, in the 1980s not realizing that children grow up much faster than Christmas trees. The children were grown and gone by the time the first group of trees was ready to harvest.

Known as Three B Tree Farm, the Jordan-based operation has stayed low-key over the years while many other farms have added petting zoos and other forms of entertainment.

Three B offers visitors an experience more like a nature retreat as they hike out to the woods past the three farm ponds with their sled with a hacksaw to look for the perfect tree, accompanied only by the crunch of snow underfoot and the occasional skitter of wildlife.

Despite a choice to avoid the razzle-dazzle of some tree farms, Three B has expanded to 33 acres they own and 15 more leased acres. This spring, they plan to plant 4,200 more trees on another parcel. The Browns live in Norfolk, St. Lawrence County, where they began their tree operation.

In addition to pre-cut and you-cut trees, the farm also has a small gift counter of locally made ornaments and photo opportunities on the picturesque grounds.

Growing Christmas trees was not either Brown’s first career. She worked as a nurse for 40 years, mostly in the North Country (Massena Memorial Hospital, Canton-Potsdam Hospital and Lake Placid Hospital), teaching for 32 of them while Robert worked for Alcoa.

While maintaining a farm may seem tough for a pair of septuagenarians, Brown said that the farm requires maintenance every other week throughout the year to shear trees and mow between them. They hire help to make wreaths and they typically hire high school students to assist with sales during the busy season.

Hiring teens is one way that Brown likes to connect with the community. She also gives a “Baby’s First Christmas” onesie to infants making their initial trip to the farm. Last year, they gave out more than 70.

The Browns participate in Trees for Troops, a program of the Christmas SPIRIT Foundation, that provides a Christmas tree to US military bases worldwide through farm and patron sponsorship.

The farm also sponsors a third-grader program, where children from Jordan Elbridge Elementary can help plant their own trees — between 90 and 120 each year. All the profit from the sale of those trees funds their Dollars for Scholars program, which is awarded to students interested in nursing or agriculture on alternate years.

The farm also hosts scouts and other events for youth.

“We want to teach young people about the value of trees and wildlife,” Brown said.

The farm works in partnership with the U.S. Fish and Wildlife Services and Ducks Unlimited to maintain their ponds as a wildlife habitat and restoration area where seasonal migratory birds visit. The farm also hosts turkeys, foxes, deer, and other wildlife.

Brown has been pleased to see the younger generation interested in farming and its tie to environmentalism. At first, she feared that the “go green” theme was a fad, but “it’s continued to grow,” Brown said. “If we were younger, we might have bought more land.”

The Browns plant two trees for each tree they cut.

“Being around younger people keeps us young,” Brown said. “We’re always working so we’re not sedentary.”

Though the normal free cocoa and popcorn will not be available this year, Brown hopes that everything else will stay the same, since cutting a Christmas tree together is a tradition many families enjoy together.