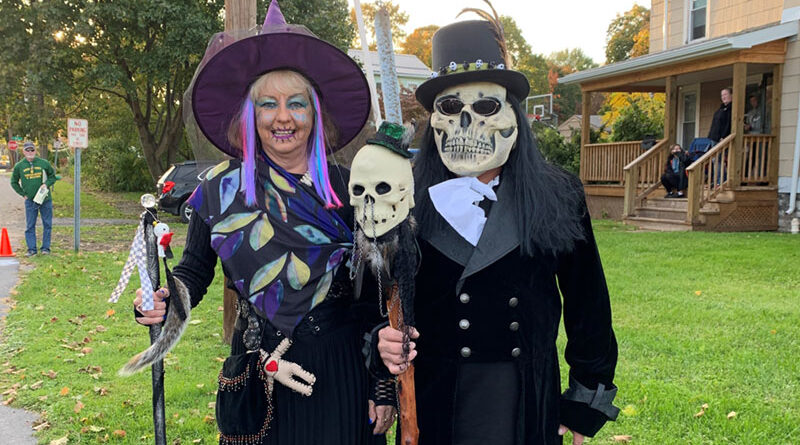 She leads the Sisterhood of the Traveling Broom, a witch-inspired dance troupe that performs locally.

Dance has always been part of the Auburn native’s life. She twirled a baton as a majorette in school, spun a rifle with the Purple Lancer Drum Corps in Auburn as a teen and young adult, and has studied ballet in New York City, which has allowed her opportunities such as dancing with the Syracuse City Ballet.

Dance has shaped her life in many ways. She met John, her husband of 45 years, while with the Purple Lancers. He played the mellophone, a brass instrument.

Dance has also provided a creative outlet and physical activity to keep her fit as she studied at Cayuga Community College to earn a business degree and study engineering. She remained in that profession for her entire career, all the while performing and teaching dance, and raising the couple’s son, Mark.

Once she retired from her day job as a civil engineer with the New York State Department of Transportation in 2009, she found herself bored after lazing at home for a year. She stumbled upon Zumba to stay fit since she felt bored with walking and running. Eventually, she earned certifications in Zumba, Zumba Gold, Aqua Zumba, Zumba Kids and Zumba Kids Jr.

Several years ago, she heard about wolfshagen hexenbrut, or German witch dances, from one of her Zumba students, who brought a video of an event to class.

“I was mesmerized,” Morabito said. “It’s done in Germany every year on April 30 like a Mayday festival to say goodbye to winter and hello to spring. They dress up as witches and have bonfires and have music, food and dance.”

Morabito thought the celebration looked like fun and developed her own witch dancing group, borrowing choreography from the group in the video. She said that is commonplace in the dance world.

“I sent them a message and they’re thrilled,” Morabito said. “My troupe is one of a thousand over the world that does this.”

In subsequent years, she has flexed her choreography skills to develop her own routines for Sisterhood of the Traveling Broom, which is open to women of any age. The women dance to what she describes as German reggae pop, along with other types of music. Last year, the group performed at 30 gigs at parades, festivals, galas, ladies’ luncheons, nursing homes and senior living centers.

She hands out maracas so the senior audience can join in the music making.

“They love it and can’t wait for us to come back,” she said.

The troupe performs to recorded music. Some of their husbands — their “warlocks” — join them in Grim Reaper-style garb. They do not dance but help set up and break down the sound system at each venue and make sure the ladies have cold drinks to stay hydrated.

“My husband does so much,” Morabito said. “One of the other warlocks, his wife is very into Halloween. They have a hearse called Toe Tagger, and it’s used in parades in good weather. It’s custom-painted purple and black and he’s part of the act in the summer. He’s always a hit.”

Morabito said the troupe of about 20 represents a mix of experienced dancers and others with little public dancing experience.

“As a theatrical performance group, you get your witch costume on and it’s an alter ego,” she said. “It’s about making a character, a persona. And it’s a whole lot of fun.”

Although the pandemic has limited the troupe’s ability to perform this summer, they did have a gig in June at Boyle Center in Auburn by performing dances at a safe distance from residents. The women meet at a public park for rehearsals.

Morabito describes their dance style as “a mix of ballet, jazz and ethnic type of steps used in Latin dance. We all have brooms and they’re part of the act. It’s very much theatrical dancing, like musical theater. The ladies all do their own costuming.”

Initially, the women come in the expected all-black dress of witches and have a black hat and broom.

“As you get into it, you go out to Halloween stores to make your costume look gypsy-ish,” Morabito said.

Strung coins along a skirt hemline add their own jingle to the rhythm as the women step and spin in unison, twirling around with their brooms.

Morabito said that it seems that many Zumba classes feature younger women who want to perform moves at a high intensity, making it not as suitable to women with worn-out knees and back problems. That has spurred her to investigate starting a class at her rented space at Auburn Public Theater for mature ladies that will offer gentler exercise.

“I want to focus on people my age with things that will help with posture and balance,” she said. “I want to teach about rhythm to help their confidence and well-being. I want to make it gentle.”

Photo: Diane Morabito, the founder of Sisterhood of the Traveling Broom, and John, her husband of 45 years