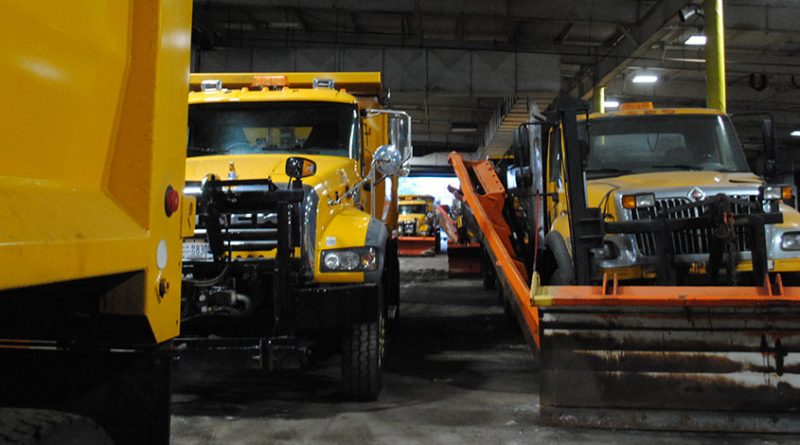 The tough job of snowplow drivers who clear the streets of Syracuse, one of the snowiest cities of its size

With an average snowfall that often exceeds 100 inches, Syracuse has the dubious distinction of having won the Golden Snowball Award 14 times since the winter of 2002-2003, beating out Albany, Binghamton, Buffalo and Rochester.

The award is presented to the city that receives the most snow in a season.

To make this kind of weather bearable are the snowplow drivers working for the various municipalities throughout the area, such as the city of Syracuse and the town of Marcellus.

The sign over one of the doors at the Syracuse Department of Public Works sums it up pretty well. “Through these doors pass the best snow fighters in the U.S.A.”

The DPW crews are responsible for plowing 406 miles of roads to cover, from the multi-lane major thoroughfares to narrow one-way roads. Those miles equate into 800-plus lane miles, since the plows need to do both sides of a road, according to Tom Ely, superintendent of street cleaning and snow and ice for the city.

Together Ely, 58, and Tony Crowder, 60, have a little more than 45 years of experience plowing city streets, and while in their respective jobs right now, Crowder is a foreman, they don’t do as much plowing as in earlier years, Crowder will jump in when needed.

“We do whatever it takes to get it done,” Ely said. His job is to dispatch the trucks and give the drivers their routes, prioritizing the emergency and rush routes, the hills, and the neighborhood streets. During a storm, Ely said they like to have 22 trucks on the streets, and if possible 25.

But at the end of a 12-hour shift, when he sees that the streets are wide open, Crowder said, “It’s a good feeling.”
“It is rewarding when everyone comes in and everything’s rolling,” Ely said.

The challenges of the job are the black ice, the hills, odd-even parking, and the illegally parked cars on the streets, especially those on steep hills. As the plows navigate down a long, steep hill, and come upon an illegally parked car, they often are not able to get around it, so they need to back all the way up that hill, while contending with an eight-foot-long plow in the front of the truck and a wing on the side that measures about 10 to 11 feet.

“That’s the importance of a wingman. Now you’ve got somebody watching the right side of you,” Crowder said.

Today, Crowder and Ely are sharing their experience with a younger crop of drivers.

In the town of Marcellus, the odd-even parking is not an issue, but the hills there can be tricky.

“Everything around us is hills,” said Jim Rossiter, 59, who has been a part-time plow driver with Marcellus for four years, having worked at the County Highway Department for 33 years.

The drivers for its highway department have well more than 100 years of experience behind the wheels of those plows. While some have been with the department for many years, others came in after having worked for the Onondaga County Highway Department.

Because the crew is small, there are no split shifts for these drivers, which can sometimes mean extra-long hours. This, MacLachlan said, can impact the drivers’ down time with their families and their diets, since much of it is grabbing food on the go; and sleep. Depending on the weather and snowfall accumulation, he might send drivers home at 9 p.m. to get some rest, but tell them to be back at 3 a.m.

The technology over the years has changed substantially. Automatic transmission gives lot more control over the truck and their salting systems have been computerized, MacLachlan said, so it puts down so many pounds of salt or salt and sand mix per square mile. The department switched to a belly sander, he said, which puts the salt and sand in front of the rear wheels as opposed as out the back, giving the tires more traction. He also has his crews fill up with more salt when they are only half-full instead of waiting until they’re empty. The maneuverability of an empty truck is worse than a car, he said.

The worst storm for Crowder, MacLachlan and Rossiter agreed was in March 1993, when the area got clobbered.

According to Syracuse.com, the storm had slammed the area with more than 3½ feet of snow between March 13 and 14. Wind gusts caused significant drifting and whiteouts.

Rossiter was still with the county at the time of the storm. He recalled, “They call you and tell you to bring a sleeping bag, pillow and change of clothes.” He didn’t, he said, regrettably, and he didn’t go home for several days.

At Syracuse DPW cots were set up in the breakroom. And after plowing through the storm, Crowder came home to find the door to his apartment buried in snow and had to dig it out by hand since his shovel was inside.

Fast forward to today and the crews are well underway preparing for the winter ahead.

“There’s nothing like putting the steel to the road,” Ely said.